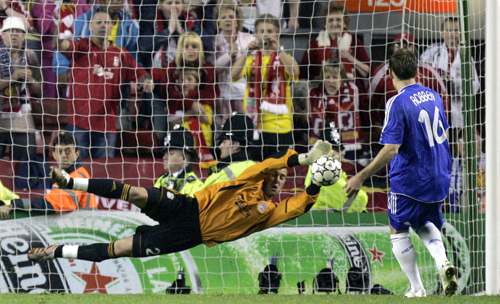 Liverpool's latest European triumph over Chelsea has left manager Rafael Benitez relishing a Champions League final and Jose Mourinho looking back on four days that are set to haunt the Blues for years.
Though it took a penalty shootout to beat Chelsea on Tuesday, two years after another 1-0 win over the Londoners at Anfield had sent them to a victorious final with AC Milan, Liverpool again proved the team with the steadier nerve.
Argentine midfielder Javier Mascherano, unrecognizable from the player seen fitfully at West Ham United earlier this season, topped a list of Reds who worked tirelessly to secure victory.
Captain Steven Gerrard, in his favored central midfield role, strikers Peter Crouch and Dirk Kuyt, who converted the decisive shootout penalty, keeper Jose Reina, who saved two penalty kicks, and defender Daniel Agger were outstanding.
Agger not only canceled out Chelsea's 1-0 first-leg win with his 22nd-minute goal but did much to render the league champions' 31-goal striker Didier Drogba a largely empty threat on the biggest night of the season for Mourinho's men.
There was also another memorable performance by what Benitez calls Liverpool's 12th man, the often deafening Anfield crowd that sang and cheered their side on before, during and after the match.
As Liverpool players left the pitch with the club anthem "You'll never walk alone" ringing in their ears, the only uncertainty was the identity of their opponents in the Athens final on May 23, a rematch with Milan or a northwest derby with arch rival Manchester United.
Two penalty saves from Reina in the decisive shootout sent Benitez's men into their second final in three years and, given how little love there is between him and Mourinho, there was no disguising the Spaniard's glee.
"Maybe it was better than when we beat Chelsea in 2005 and I am really, really proud of my players," said Benitez, who has never made any secret of his irritation with Mourinho's consistent carping over the "ghost" Luis Garcia goal which gave Liverpool a win two years ago.
Despite the acrimony between him and Mourinho, Benitez acknowledged that the battle had been closely fought and Chelsea will regret failing to make more of the opportunities it had in last week's first leg at Stamford Bridge.
"They are a very good side with some good players and at times it was difficult to control them," Benitez admitted.
Sizable achievement
Liverpool's victory over Chelsea will not be remembered as a great game; there was too much tension, too many players going to ground and precious little in the way of flowing football.
But it will clearly go down in Anfield history as a sizable achievement, and one to be savored all the more for having sent a bulldozer through Chelsea's expensively-assembled china shop.
Europe had become an even bigger target for the Londoners after Chelsea's 2-2 draw on Saturday with Bolton Wanderers all but handed the Premier League title to United, the team Chelsea meets in the FA Cup final at Wembley on May 19.
Mourinho's mood will not have been helped by post-match suggestions from the Liverpool players that his comments in the buildup to Tuesday's encounter had put a little extra fire in their bellies.
"That's Jose for you - he's been a credit to English football, he makes us laugh now and then," said Steven Gerrard. "I think he was a bit disrespectful calling us a little club. Two finals in three years - not bad for a little club."
Mourinho denied that he had been anything but respectful to Liverpool and, equally implausibly, insisted that his side had had the better of the second leg despite struggling to cope with the physical toll imposed by chasing silverware on four fronts.
"My players have a lot of reasons to be proud," Mourinho said. "They did a great run in the Champions League and even against a team with only the Champions League to play for, we were the best team."
Trailing United by five points in the league with three games left, Chelsea's hopes of winning a Quadruple are over.
Chelsea withstood plenty of Liverpool pressure and seemed to cope with the electric atmosphere.
But it failed to match its attacking performance of the first leg and was too often reduced to lumping high balls up to an isolated Drogba, who was at times chaperoned by three markers.