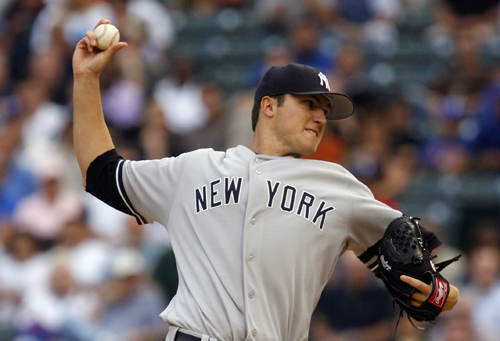 Inching closer to history with each pitch, Phil Hughes had a no-hitter going deep into his second major league start. He also owned a nine-run lead, and had the Yankees believing in brighter days at last.
And then he grabbed his left hamstring.
Hughes was forced from Tuesday night's game with one out in the seventh inning, in what became an empty 10-1 victory over Texas at Rangers Ballpark in Arlington.
Manager Joe Torre estimated that Hughes would miss from four to six weeks, and the right-hander used the words "disappointed," "frustrated," and "flustered" to describe his emotions.
Now, he'll be battling for space on the trainer's table.
One day after owner George Steinbrenner expressed confidence in the abilities of Torre and general manager Brian Cashman to right the ship, and challenged his club to "show me and the fans what they're made of," the Yankees' fragile starting staff suffered its latest direct hit.
Hughes, 20, had allowed just three walks, used two double-play grounders and faced just one batter over the minimum in 83 pitches. As the tension built, Mark Teixeira fouled off a two-strike pitch by Hughes - who suddenly shouted in pain and grabbed the back of his leg.
Feeling a 'pop'
The Yankees (10-14) took no chances, pulling Hughes for Mike Myers, who lost the no-hitter on Hank Blalock's leadoff double in the eighth.
Hughes said he felt "a little pop" in his hamstring, the same one he injured as a high school senior - though not as severe.
Until the injury, "I felt very relaxed and focused on the pitches I needed to make," Hughes said of his dynamite combination of fastballs, change-ups and curveballs. "I never thought about (getting) the last out in the ninth."
Hughes (1-1) received the lineup card and baseball from his first major league win in the trainer's room, where new performance enhancement coach Marty Miller is under increasing scrutiny.
Hughes said he over-extended in throwing a breaking pitch to Teixeira, which might have caused the injury. As Cashman said: "This could've happened to him (if he were in Class AAA)."
Before the game, Cashman said that because of the Yankees' desperate need for starting pitching, Hughes' development "is now in the big leagues," following just three starts at Class AAA Scranton.
By the sixth inning Tuesday night, superstitious teammates kept their distance from Hughes.
"He had so much command. ... it was going to happen," Torre said of a no-hitter. "That was the sense in the dugout."
Hughes was not on a pitch count, and probably would've been allowed to complete his first no-hitter since a seven-inning perfect game in high school in 2004. "I was just wondering how long he was going to be able to go," Mike Mussina said. "They didn't hit a ball hard, he was really dominating."
In other AL action: Oakland 5, Boston 4, 10 innings; Detroit 5, Baltimore 4; Cleveland 12, Toronto 4; Minnesota 9, Tampa Bay 1; NY Yankees 10, Texas 1; LA Angels 7, Kansas City 5; Seattle 5, Chicago White Sox 2.
In National League action: Chicago Cubs 6, Pittsburgh 5 1/2 innings, susp., rain; Florida 5, NY Mets 2; Philadelphia 6, Atlanta 4; Cincinnati 11, Houston 2; Milwaukee 12, St. Louis 2; San Diego 3, Washington 0; LA Dodgers 2, Arizona 1; Colorado 9, San Francisco 7.