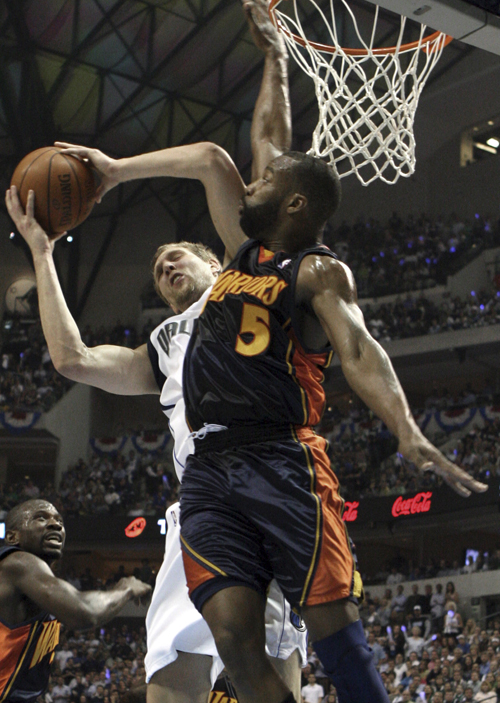 For a few fleeting moments in Tuesday night's first half, they were back.
Maybe you didn't blink and you saw them.
The Hollywood Mavericks. The 67-win Dallas Mavericks. The slashing, dashing Mavericks. The Mavericks who for six months had us all convinced that they were the NBA's best team.
The same Mavericks whose picture you might have seen on milk cartons lately, under the caption, "Have you seen these men?"
Yes, Mavericks fans saw them. Oh, so briefly.
But can they trust them, even after Tuesday's 118-112 victory in Game 5? Can they depend on them, after squandering a 21-point lead against the Golden State Warriors in the first half, to now go to Golden State and even the series at three games apiece?
Can they have faith in Dirk Nowitzki, who finally stepped up in this series and carried the Mavericks during the game's final stretch? Forget the wounded animal parables. Spare me the backs-to-the-wall cliches.
The headlines will talk about Nowitzki's 30 points, and Josh Howard's 23, and how Devin Harris' drive to the basket ignited the final Mavericks run. Down three games to one, the Mavericks were shopping for a victory of any size, any color.
The final 3 minutes Tuesday might - as they trailed by nine and seemed ready to go down in flames - well have been the most desperate of their NBA lives.
But when the sighs of relief ended and the arena parking lots began to empty, the subtitle to Game 5 couldn't and shouldn't be forgotten - the Mavericks, playing at home, let a 21-point lead slip away and the eighth-seeded Warriors nearly mugged them again.
Now, the gamesmanship begins. Mavericks coach Avery Johnson already has planted the first elbow.
"Hey, this is a battle," Johnson said, paying homage to Don Nelson's Warriors. "They're not playing like an eight seed. But now there's lots of pressure on them. They've got 10,000 pounds on their right arms up there in Oakland."
The Warriors, he meant, need to end the series in their home arena Thursday night or they risk a possibly dicey trip back here for Game 7.
Did the Mavericks, however, give any reason to think they could outplay the upstart Warriors on Golden State's home floor?
If they did, those moments came during Tuesday's first half. The Mavericks began the game with a hot shooting hand, spreading the floor and driving to the basket whenever Golden State defenders came out to challenge them.
Johnson got exactly what he wanted from DeSagana Diop. The big man's presence kept the Warriors out of rhythm on their slashes to the basket. At the end of the quarter, the Mavericks' 38-point period gave hints that this would be their best night.
They looked like the old Mavericks. The 67-win Mavericks. The Mavericks that were supposed to have had this opening-round series wrapped up, oh, two nights ago.
At the start of the second period, though, the shots stopped falling. At the 10:12 mark of the quarter, Harris picked up his third foul.
By halftime, the Warriors were back in the game, trailing only 62-55. In truth, it took guile and guts for the Mavericks to maintain the lead, mostly because of a startling statistic.
Namely, the Mavericks scored 24 points in that second quarter, even though they didn't make a single two-point jump shot outside of the free-throw paint.
They hit three 3-point field goals in the period, made six more baskets inside the paint and converted three free throws.
Anything they shot, in other words, from roughly 10 to 20 feet didn't go in. Yet, by dashing to the basket and making the best of an untimely cold spell, the Mavericks were still able to take their lead to the halftime locker room.
In fact, it was during the cold spell that the home team's lead grew to 53-32, its largest of the night.
The Warriors came storming back, however, found their own shooting eyes in the third quarter, and the night reverted to a now-familiar anxious feeling.
Nowitzki's resolve, coupled with his perfect free-throw shooting, was the difference in the end. But can he, can the Mavs, be trusted to do it again in Game 6 in front of a hostile Golden State crowd?
Only a few fleeting moments Tuesday should make you think so.
Nets fall to Raptors
The New Jersey Nets that looked so dominant at home, with Jason Kidd and Vince Carter playing like they wanted to carry the team deep into this postseason, didn't make it through customs.
The defensive-minded Nets that shut down Toronto in Games 3 and 4 in New Jersey also had trouble making it over the border. With a chance to close out the Raptors, the Nets dug themselves a 20-point hole early and spent most of Tuesday night's game fighting back.
Amazingly, they had an opportunity to win, but when Bostjan Nachbar's three-pointer hit the front rim, their comeback fell short and they lost, 98-96, to the Raptors at Air Canada center.
Nachbar, who was 0-for-7 on threes in the game, was kicking himself for afterward.
"Vince did a great job sucking in the defense," Nachbar said. "He made a big play. He showed trust in me and I screwed it up."
The victory cut the Nets edge in the series to 3-2.