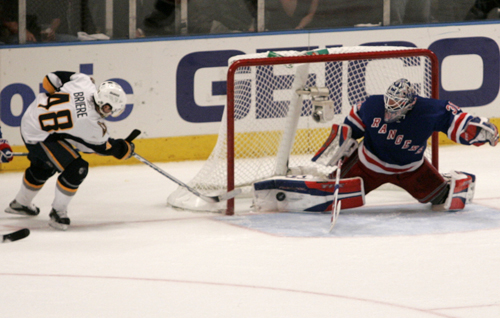 One unprecedented event landed in the Anaheim Ducks' lap Tuesday night. Another is coming.
"That's my first overtime goal," Travis Moen said, a few minutes after scoring it and getting the Ducks past the Vancouver Canucks, 3-2, for a 3-1 series lead.
"Yeah, and I won't be able to live with him now," Shawn Thornton moaned. "I'm his roomie. I'll probably have to buy him dinner." Moen grinned at that. "He's never bought me dinner before," he said.
Who knows what other firsts await?
It's the first time the Ducks have wiped out a 2-0 deficit in these playoffs, and they waited until the third period to start working on it.
But with their customary inexorable pressure, some more clutch stops by Jean-Sebastien Giguere, more artillery from Chris Pronger and Moen's opportunity goal, the Ducks can wrap up this Western semifinal on Thursday night in Anaheim.
"Yeah," Thornton called out as the cameras surrounded the Ducks' checking winger. "That's T-R-A-V-I-S."
Moen was going to be in the headlines one way or another.
The Canucks got their 2-0 lead when Brendan Morrison swooped down on a two-on-two and banged a shot off Moen's skate and past Giguere.
Wicked twist of fate, you thought.
Bad play, Moen thought.
"It was a bad break because it went off my skate," he said, "but I took the wrong man in that situation. I should have left it to Scotty (Niedermayer). He's a pretty good defenseman. He knows what he's doing. I didn't do the right thing."
Moen got the winner when S. Niedermayer's shot bounced off Mattias Ohlund's skate.
Right after Morrison's goal, the Ducks began tilting the ice as only they can, with long possessions inside the zone that tired Vancouver's D-men.
"We came in after two periods and thought, well, we won that period," Perry said. "We didn't win it on the scoreboard, but I thought we won it on the ice, and we carried that into the third period as well."
Chris Pronger finally got one of his lasers past Roberto Luongo, who was named a finalist for three NHL awards Tuesday. That shot - and some pointed lineup tweaking by Ducks' coach Randy Carlyle - seemed to give Anaheim some traction.
Ten and a half minutes later, Pronger launched another one, this time from the right point, and Andy McDonald batted it to Teemu Selanne, who scored high for the 2-2 tie.
Two-goal leads are usually impregnable in series like this, with goalies like this. As has been clear for some time, these aren't usual Ducks.
Well done, although Travis Moen might prefer medium rare.