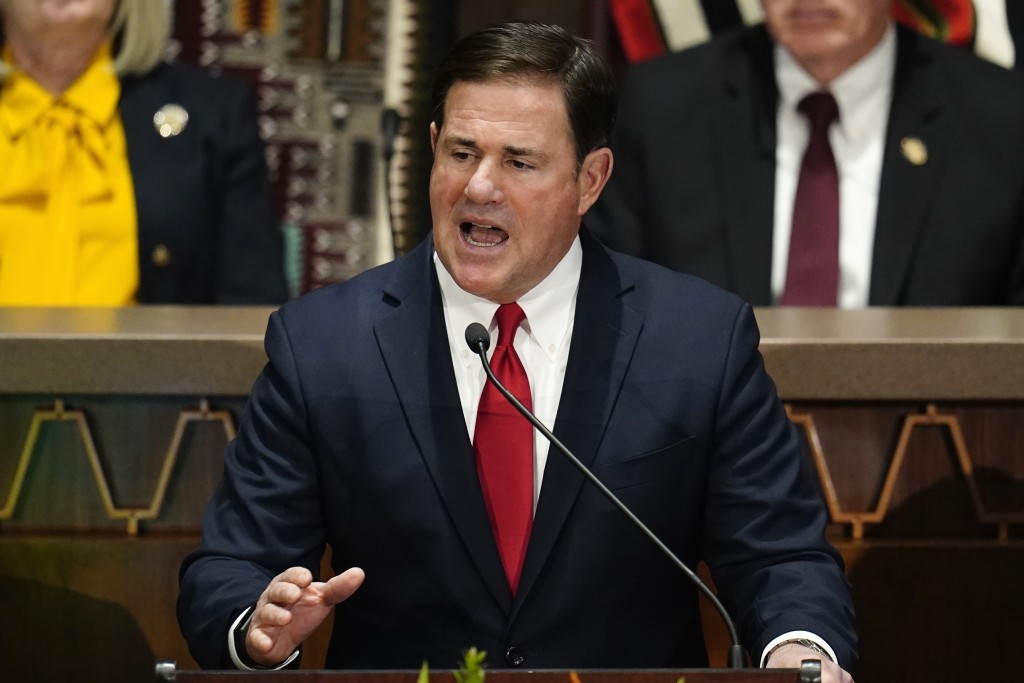 PHOENIX (AP) — Arizona Gov. Doug Ducey sued the Biden administration on Friday over its demand that the state stop sending millions in federal COVID-19 relief money to schools that don't have mask requirements or that close due to COVID-19 outbreaks.

The lawsuit filed in federal court in Phoenix comes a week after the U.S. Treasury Department demanded that Ducey either restructure the $163 million program to eliminate restrictions it says undermine public health recommendations or face a repayment demand. The Treasury Department also wants changes to a $10 million program Ducey created that gives private school tuition money to parents if their children's schools have mask mandates.

Ducey's lawsuit said the Treasury Department created restrictions on spending the money Arizona receives under President Joe Biden's American Rescue Plan Act on its own and without legal authority. It asks a court to declare that the Treasury Department's rules are illegal and permanently block enforcement and any demands that it pay back the $173 million it is spending on the two programs.

“Nothing in that underlying statute authorizes Treasury to condition the use of (ARPA) monies on following measures that, in the view of Treasury, stop the spread of COVID-19,” the lawsuit says. “If Congress had truly intended to give Treasury the power to dictate public health edicts to the States, and recoup or withhold (monies) ... it would have spoken clearly on the matter. It did not.”

The Centers for Disease Control and Prevention recommends universal mask-wearing in school settings to prevent the spread of COVID-19.

“By discouraging families and school districts from following this guidance, the conditions referenced above undermine efforts to stop the spread of COVID-19,” the Treasury Department wrote in last week’s letter.

The Treasury Department started demanding that Ducey change the programs in October. It was part of a concerted effort to force Arizona and some other Republican-led states that have opposed mask mandates or were using pandemic funding to advance their own agendas to end those practices.

Ducey rejected Treasury's request the following month, and last week the Biden administration followed up with a formal demand that it cease using the money for the disputed programs or face either repayment demands or withholding of additional money it is set to receive under Biden's COVID relief bill.

Friday's lawsuit said the Treasury Department initially recognized that states have "broad latitude to choose whether and how to use the (money) to respond to and address the negative economic impact” of COVID-19. But then it changed course, and created the new rules, the suit said.

The Treasury Department said it backs its decisions on the rules.

“Treasury believes the rule is correct and allowed by the statute and Constitution," spokesperson Dayanara Ramirez said.

Arizona’s Education Plus-Up Grant Program provides $163 million in funding to schools in higher-income areas that received less than $1,800 per student in federal virus aid. Districts that require face coverings or that have closed due to virus outbreaks are ineligible.

Another called the COVID-19 Educational Recovery Benefit Program provides for up to $7,000 for parents if their child’s school requires face coverings or quarantines after exposure. It lets parents use the money for private school tuition or other education costs and its design mirrors the state’s existing school voucher program.

In a letter sent last week, the Treasury Department warned that the state has 60 days to remove the anti-masking provisions before the federal government moves to recover the relief money, and it threatened to withhold the next tranche of aid as well.

Ducey created the programs in par t to up the pressure on school districts that had mask mandates or other COVID-19 restrictions, saying they were hurting children and parents who had endured more than a year of school shutdowns, remote learning and other restrictions. Provisions in the state budget that barred school mask mandates statewide were later thrown out by the Arizona Supreme Court because they were improperly adopted, but Ducey did not change the programs.

“Safety recommendations are welcomed and encouraged — mandates that place more stress on students and families aren’t,” Ducey said in August. “These grants acknowledge efforts by schools and educators that are following state laws and keeping their classroom doors open for Arizona’s students.”

Arizona has received about half of the $4.2 billion awarded to it under the 2021 coronavirus relief bill, and the Treasury Department said it may withhold payments if Ducey failed to comply with its demands.