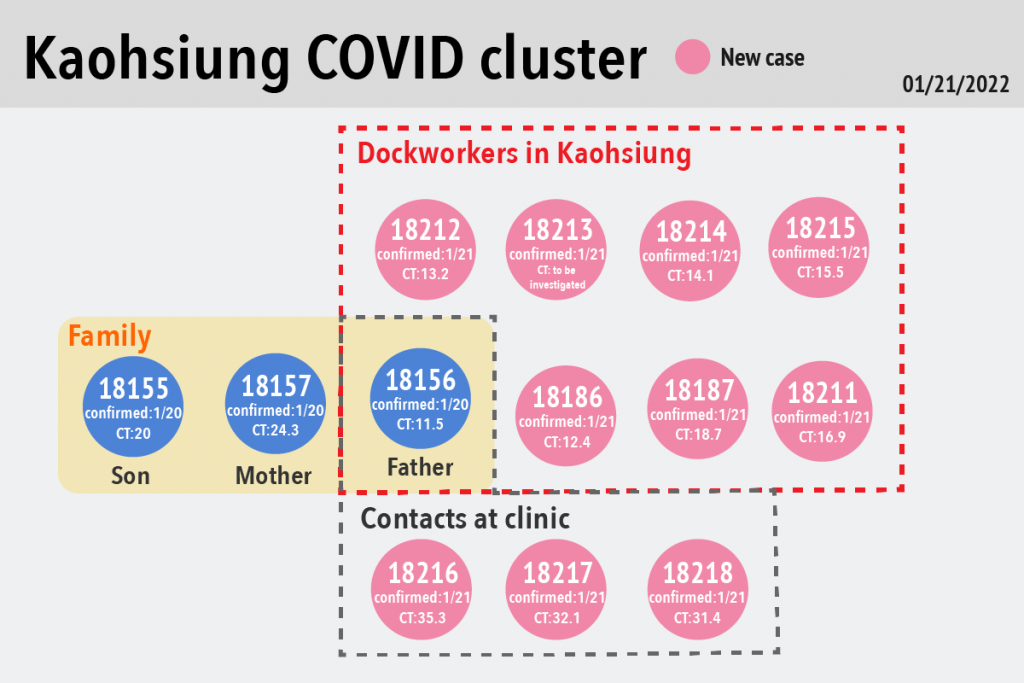 TAIPEI (Taiwan News) — Ten new COVID cases tied to an Omicron family cluster infection of three in Kaohsiung have been detected, bringing the total to 13.

On Thursday (Jan. 20), the Kaohsiung City Government announced that a family of three, including a four-year-old boy (case No. 18,155), a man in his 50s (case No. 18,156), and a woman in her 30s (case No. 18,157), had all contracted COVID. The health department immediately launched an epidemiological investigation and after testing was carried out on contacts, 10 more cases were announced by Kaohsiung Mayor Chen Chi-mai (陳其邁).

Among these cases, seven are workers at Kaohsiung Harbor who had worked on a foreign merchant ship called the Hsin Kuang (新光輪船) with case No. 18,156. Three people who did not directly board the ship tested positive after visiting an ear, nose, and throat clinic.

The family members had Ct values ranging from 11 to 20 and the Ct values for seven port workers ranged from 12.4 to 18.7. The three people who tested positive at the clinic had higher Ct values that ranged from 31.4 to 35.3.

All the cases except for one of the dockworkers, case No. 18,215, were symptomatic. Symptoms included sore throat, muscle ache, fatigue, cough, sputum, and fever.

Chen said that the fact that it only took one day for the infection to be confirmed in almost all cases shows that the incubation period is very short. The mayor said that based on initial genetic sequencing, the health department has made the preliminary assessment that the patients have been infected with the Omicron variant.

Chen says that the boy's father, case No. 18,156, is a ship maintenance worker employed at the Port of Kaohsiung, the largest harbor in Taiwan. According to Chen, the man had most recently been working on a general cargo ship, Mai La (麥拉輪船), and the Hsin Kuang, which had been berthed at Kaohsiung's harbor from Jan. 10 to Jan. 19.

The ships' previous port of call was Manila and the next is Jeju Island, South Korea. On Jan. 15, he went to the ear, nose, and throat clinic as he was experiencing symptoms such as a headache and cough, but the clinic did not report testing the man for the virus.

On Jan. 20, his son went to Kaohsiung Chang Gung Memorial Hospital due to physical discomfort. When he was admitted to the hospital, he was tested for COVID and the results came back positive that same day.