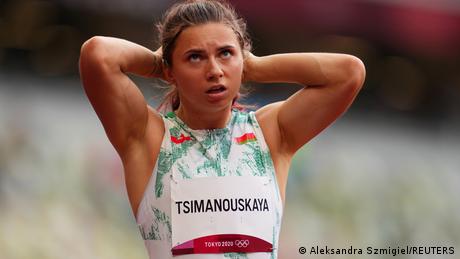 During the 2020 Olympics in Tokyo, the fate of Belarusian athlete Krystsina Tsimanouskaya attracted worldwide attention. She wanted to run in the 100 and 200-meters, for which she had qualified, but her coaches put her on the list for the 4x400-meter relay without her knowledge or permission.

The runner complained about this on social media, saying she had never competed in 400-meter events before. The response of the Belarusian leadership was to exclude her from the Games and try to forcibly bring her back home. But at the Tokyo airport, the sprinter refused to get on the plane and asked the Japanese police for help. Eventually, she got it, in the form of a humanitarian visa, and was able to fly to Poland.

Just a few years ago, the 25-year-old was a star of Belarusian sport. But athletes who showed solidarity with demonstrators and openly opposed the regime of leader Alexander Lukashenko after the contested Belarusian presidential elections in August 2020, saw their sports careers come to an end from that moment onwards. In their home country, at least.

Timanovskaya could not have dreamt that she would be forced to leave Belarus, but she's now been living and training in Warsaw for half a year.

"I have said from the beginning that I want to continue my sports career as part of the Polish national team. This question is still under consideration. But I already had an offer to join a sports club and a month later I started training. Now the procedure to change my 'sports citizenship' is underway," she told DW.

In Warsaw, Timanovskaya was also able to realize a long-standing ambition: She created her own sportswear brand "Be strong".

"Part of the product is decorated with a heart. It consists of words of support that people have sent me: be strong, be brave, don't give up, believe in freedom," she added.

She is currently planning a summer collection and may design clothes for home training.

'I feel comfortable in Vilnius'

The former captain of the Belarusian national basketball team, Katsiaryna Snytsina, also lives abroad. She has not been back home for 1 1/2 years. Even before the presidential election in August 2020, she had flown to Turkey because she is registered for a club there. But the protest movement in Belarus did not pass her by.

"In the first few days, I could not reach my family and friends in Minsk. Later, I found out that relatives of mine and many of my fans were arrested and beaten. So I couldn't stay silent and I supported people who also helped me with my sports career," she told DW. Despite the stress caused by the events in Belarus, the 2020 season was successful for her, with her team finishing third in the Turkish championship.

"When my contract expired in May, I thought about returning to Belarus. But I went to Lithuania and stayed there all summer. There I took part in solidarity actions and protests, gave interviews and spoke about the situation in Belarus," she said.

Now she is playing in Turkey again, but after the end of the season she wants to go back to Vilnius. "I feel comfortable there," said the 36-year-old.

'If the situation changes, I will return'

Semyon Bukin, a former member of the Belarusian gymnastics team, left the country just over a year ago. In November 2020, he was arrested during one of the Sunday protest marches. He says he was then beaten and forced to starve in solitary confinement in prison for several days. After 15 days, he was told to leave the country. Semyon spent some time in Ukraine, then in Poland and finally got a job as a coach in Stockholm.

"I have been working with children, youths and adults for almost a year now and I quit before the end of my contract. It has been an emotionally difficult year. I miss my family. In addition, friends of mine have been imprisoned and I have been very worried about them," the gymnast told DW.

He still lives with his sister in Poland, but from February he will be working for the international circus "Cirque du Soleil," a place where he has previously been employed.

But Semyon dreams of returning to Belarus: "If the situation changes there, I will definitely return. The only question is what the political course will be. With a puppet government of Russia, I will not return, because I don't want to be under Moscow's occupation."

'I want to live in an independent country'

A return to Belarus is also currently out of the question for Vitaliy Gurkov, multiple world and European champion in Thai boxing and kickboxing.

Gurkov, who is also a singer for the punk band BRUTTO, has been living in Ukraine for 18 months, where he was performing with his band before the 2020 presidential election. When Gurkov saw how events were developing at home, he decided to stay in Kyiv, where he now works as a coach.

"It would be impossible to live in Belarus with my convictions," Gurkov explained to DW.

Watching what is happening in his homeland is difficult for the champion kickboxer. He thinks that half of the Belarusian population firmly believed in those who called them to protest. However, people did not expect the situation in the country to develop so dramatically, he added.

Emigration was easier for him than for many other Belarusians because he had time to weigh up his decision. He currently sees no reason to return to his homeland.

These are unlikely to be the last Belarusian athletes to take such action. In a recent interview with Reuters, cross-country skiers Sviatlana Andriyuk and Darya Dolidovich claimed they had been stopped from competing in the upcoming Beijing Olympics for Belarus as a result of their political beliefs.

This article was origninally written in German.