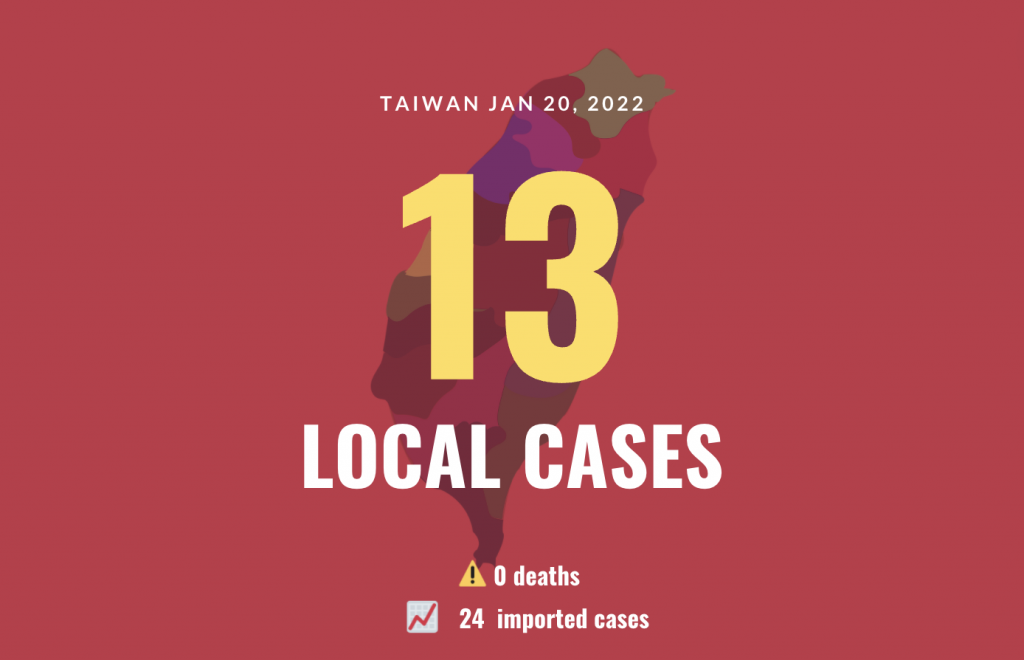 Chen said the local cases include five males and eight females ranging from under 5 years old to their 80s. Of these cases, five are of unknown origin, including a family of three in Kaohsiung and two cases in Taoyuan located close to the Danan Market.

However, they are not contacts of case No. 18,119, a vegetable vendor, who later tested negative for the virus.

The 24 imported cases include 13 males and 11 females ranging in age from under 10 years old to their 50s. Of these, 15 tested positive upon arrival at the airport, while nine tested positive during quarantine.

Between Jan. 5 and Jan. 19, they arrived in Taiwan from the U.S. (10 cases), Vietnam, France, Australia, Paraguay, and Saudi Arabia. The country of origin of five cases is still being investigated.

To date, 851 individuals have succumbed to the disease. Of the 838 deaths from local infections, 413 were in New Taipei; 322 in Taipei; 29 in Keelung; 27 in Taoyuan; 15 in Changhua County; 13 in Hsinchu County; five in Taichung; three in Miaoli County; two each in Yilan and Hualien counties; and one each in Hsinchu City, Nantou County, Yunlin County, Tainan City, Kaohsiung City, Pingtung County, and Taitung County. The 13 other deaths were imported cases.