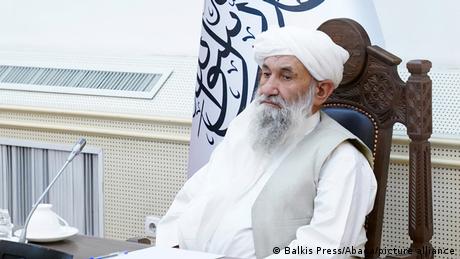 Taliban leader and acting prime minister of Afghanistan, Mohammad Hassan Akhund, called on the international community to recognize the Taliban government during a news conference in Kabul on Wednesday.

The broadcast was his first major appearance since assuming the role in September and came as the hardliner conservative administration struggles with a faltering economy and continued violence with other militant groups.

"I ask all governments, especially Islamic countries, that they should start recognition," Akhund — who is one of the founders of the Taliban — said at the conference.

No foreign government has yet recognized the Taliban as the legitimate rulers of Afghanistan, although several have taken steps to normalize relations.

The Taliban blames the current economic crisis on the freezing of billions of dollars' worth of Afghan funds by Western nations led by the United States.

Development aid, which once formed the basis of the central Asian country's economy, has also been cut off.

International aid is still entering the country to help fight the ongoing humanitarian crisis, but governments are wary of propping up the Taliban regime by providing the necessary support.

Western countries are still waiting to see if the Taliban lives up to its promise of not repeating some of the extreme brutalities it exercised during the group's last stint in power between 1996 and 2001. Women's rights and human rights in general are at the top of the agenda.

"Short-term aid is not the solution; we must try to find a way to solve problems fundamentally," Akhund said.

The economic woes and harsh winter have already plunged millions of Afghans into poverty.

"We do not want anyone's help. We don't want it for the officials. We want it for our public," the acting prime minister said.

"I call on Muslim countries to take the lead and recognize us officially. Then I hope we will be able to develop quickly," he added.

The Taliban seized power in August, following the withdrawal of most international troops. The seizure sparked a chaotic departure of remaining US forces as well as the evacuation of tens of thousands of Afghans who attempted to flee from the Taliban's restrictive and harsh rule.