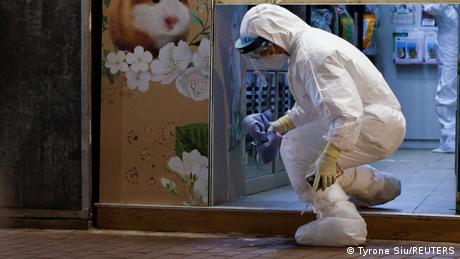 Hong Kong health authorities on Tuesday said around 2,000 hamsters and chinchillas need to be put down after COVID-19 infections were traced back to a pet store.

At least 11 hamsters tested positive for the COVID-19 and a store employee was also infected with the delta variant, according to officials.

Pet owners who purchased hamsters from the store after December 22 have been instructed to hand over the animals to be destroyed, and not to set them free on the streets. Those who had been in contact with the animals would also have to quarantine.

Authorities have also tested other small animals, among them rabbits and chinchillas, but only the hamsters have tested positive.

All pet stores in the territory have also been instructed to stop selling hamsters.

Local health authorities said they were not ruling out the possibility that there had been transmission between animals and humans.

"We cannot exclude the possibility that the shopkeeper was in fact actually infected from the hamsters," said Edwin Tsui, a controller at the Centre for Health Protection.

That's despite the US Centers for Disease Control and Prevention saying that animals do not appear to be a significant factor when it comes to the spread of the virus.

"If you own a hamster, you should keep your hamsters at home, do

not take them out," the director said. "Do not kiss your pets,'' he added.

SPCA 'shocked' with the decision

Hong Kong's Society for the Prevention of Cruelty to Animals expressed shock at the decision.

"The SPCA is shocked and concerned over the recent government announcement on the handling of over 2,000 small animals, which did not take animal welfare and the human-animal bond into consideration," it said.

Hong Kong has been trying to tackle an omicron outbreak which has been traced back to flight attendants from Cathay Pacific.

The territory has also banned travelers from 150 countries from transiting through the country.