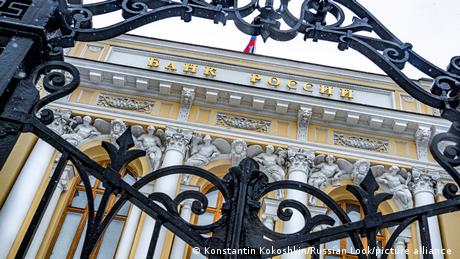 Diplomats from the United States and Europe continue to threaten Russia with new sanctions in an attempt to stop a feared invasion of Ukraine. But confusion remains over which penalties could be levied.

During a visit to Kyiv on Tuesday, German Foreign Minister Annalena Baerbock warned that Moscow would pay a "high price" if the crisis could not be solved by diplomatic means.

Her US counterpart, Anthony Blinken, last month warned of "massive consequences" if Russian President Vladimir Putin ordered military action against Ukraine, after the Kremlin amassed an estimated 100,000 troops on the joint border.

Around the same time, rumors emerged that Washington may seek the so-called nuclear option of cutting off Russian banks from the SWIFT (Society for Worldwide Interbank Financial Telecommunications) payments system — a global network used by almost all financial institutions to wire sums of money to each other.

Exclusion from SWIFT, which is responsible for 35 million daily transactions moving some $5 trillion (€4.4 trillion) around the world, would cause significant disruption to the Russian economy, according to several financial analysts.

As well as making it more difficult for Russian banks to make and receive international payments, the measure would likely weaken the ruble currency significantly. Russia's energy giants would be particularly impacted.

Although the measure was widely seen as effective in forcing Putin back from the brink of war, German business daily Handelsblatt on Monday cited German government sources as saying that the SWIFT exclusion is now off the table.

Russian banks could be targeted

Handelsblatt said that course of action was ruled out, as it would also destabilize global financial markets and promote the development of alternative payment systems that would not be subject to oversight by Western countries.

Instead, the newspaper reported, Russian banks could be singled out for sanctions.

Russia and China have already developed their own alternatives to SWIFT, but they don't yet have the same global coverage.

A spokesperson for the White House National Security Council, however, rejected the Handelsblatt story.

"No option is off the table. We continue consulting very closely with European counterparts on severe consequences for Russia if it further invades Ukraine," the spokesperson told Reuters news agency.

Few details have emerged of how Russian banks could be targeted this time, but Germany is keen to avoid curbs so tight that they make it difficult for Europe to pay for gas and oil imports from Russia, according to the newspaper.

The Financial Times reported Tuesday that the sanctions could be similar to those levied against Iran and North Korea, which have all but cut the countries off from the global economy.

In 2012, Iran became the only country to date to be excluded from SWIFT as part of Western sanctions against its nuclear program.

The US and EU previously placed sanctions on Russian banks and companies following Moscow's annexing in 2014 of Crimea — territory recognized by the United Nations as belonging to Ukraine.

The curbs, aimed at Russia's arms and energy sectors, limit access to EU and US financial markets.

German business leaders previously called for easing of sanctions on Russia, as Europe's No.1 economy has much to lose from further sanctions.

For example, Nord Stream 2 — a new gas pipeline that runs through the Baltic Sea from Russia to Germany — was completed late last year, but has yet to receive operating approval from German authorities.

The pipeline will bring more Russian gas to Western Europe. But opponents of the project, including Ukraine and the United States, argue that it would make Europe too dependent on Russian energy.

Berlin is under intense pressure from the US and the European Union to halt the approval of Nord Stream 2 as part of sanctions efforts.

German Foreign Affairs Committee Chairman Michael Roth told broadcaster ARD on Tuesday that Berlin could not rule out using the pipeline as a lever against Russian aggression towards Ukraine.

"If we should really come to sanctions, and I still hope we will be able to avoid that, then we cannot rule out in advance things that may be demanded by our partners in the European Union," Roth said.

Rafael Loss from the European Council on Foreign Relations told DW that Berlin has so far "shown very little resolve" in helping Ukraine to deter Russia.

"Discussions in Berlin over the past couple of days have been dominated by all the things that Germany is not willing to put on the table to diffuse this crisis, namely Nord Stream 2, arms transfers and SWIFT."

He also pointed to perceptions in Europe that talks between the US and Russia were "happening over the heads of Europeans," noting how the EU's foreign policy chief Josep Borrell was angry that Brussels was "not playing any sort of meaningful role."

Meanwhile, Russia's finance minister warned last week that while further sanctions would be "unpleasant," the country would cope. "I think our financial institutions can handle it [if] these risks emerge."