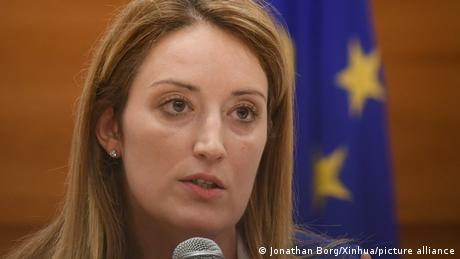 Roberta Metsola has always made it clear that, for her, the European Union is not a complex bureaucratic institution but rather a real passion. It's not a bloc that is rattled by crisis, instead a place to foster European values and enthusiasm for a project that emerged from the ashes of the World War II.

Now, the conservative politician from Malta has to prove she can turn her words into action.

On Tuesday, Roberta Metsola was elected president of the European Parliament — the same day that she turned 43.

Although Metsola's election may be a welcome birthday gift for the Maltese lawmaker, it did not come as a surprise.

In a common agreement, the three biggest European parliamentary groups — the conservative European People's Party (EPP), the Socialists & Democrats, and the liberal Renew group — had decided that a conservative representative would take over the post at midterm.

Metsola, whose Partit Nazzjonalista (Malta's Nationalist Party) is part of the center-right EPP group, seemed to be the obvious choice, as she is respected across party lines and known as a bridge-builder.

David Casa, a party colleague of Metsola's and fellow member of the European Parliament, summed it up: "We are all used to division and crisis. And Roberta's rise and popularity prove that it's still possible to conduct politics through consensus."

The Maltese politician is only the third woman at the head of the European Parliament, following in the footsteps of her French predecessors Simone Veil and Nicole Fontaine.

The European Parliament is the EU's lawmaking body, representing the bloc's 450 million citizens. It is directly elected by EU voters every five years.

Metsola failed to get elected twice

Two campaign videos released by the EPP group on social media ahead of the elections show how Metsola wants to be perceived: A person who is inspired by strong women, and wants to inspire others. A mother of four boys who juggles family and career. A fighter who doesn't give up when she believes in something.

She is no stranger to failure. Metsola only managed to get elected to the European Parliament in 2013 after failing twice. Since then, she's seen a swift rise. In 2020, she moved on to become one of the EU parliament's first vice presidents. As a member of the Committee on Civil Liberties, Justice and Home Affairs, she has defended the right to asylum in the EU.

Following the murder of her countrywoman, journalist Daphne Caruana Galizia, Metsola has been calling on the Maltese government to ensure media freedom and fight corruption.

Maltese Member of European Parliament David Casa, who called Metsola one of his closest friends, told DW that he has known her since her student days in Malta.

Back then, he said, it was her determination and ambition that made her stand out. Both Metsola and Casa had campaigned for Malta to join the European Union in 2004. Metsola repeatedly said it was this goal that sparked her political activism and made her spend less time in the library studying law.

Many EU lawmakers rooted for her on Tuesday. Fellow conservative parliamentarian Stelios Kympouropoulos, from Greece, described her as "bold enough to be the face of an extroverted and strong parliament."

As the European Parliament often struggles to find common ground within the EU's other institutions, the European Council and the European Commission, boldness is certainly a trait that could help push through the parliament's interests.

But even though Roberta Metsola is a consensus candidate, many — especially the Greens and the Left group — are not particularly happy about her being a leading figure.

That is mainly because the Maltese politician has always voted against resolutions in the European Parliament that asked EU countries to legalize abortion.

The position is not entirely surprising, given that Metsola is from Malta. The Mediterranean island nation, which is the EU's smallest member, has one of the strictest abortion laws in the world, and is also the only country in the EU to prohibit the procedure.

For Manon Aubry, a French left-wing member of the European Parliament, that is no excuse. "I think it is a terrible sign for women's rights everywhere in Europe," she told DW. "For example, for women in Poland who have been fighting for the right to have control over their own bodies for almost two years."

However, Aubry also recognized that Metsola is part of the progressive wing of the conservative EPP, which for example advocates for LGBTQ rights.

In light of this, Aubry called Metsola's anti-abortion stance "paradoxical."

Aubry's Spanish left-wing colleague Sira Rego, who unsuccessfully ran for Roberta Metsola's presidential post, said it is important for women to have visibility. But affecting real change is even more important.

"In addition to women occupying symbolic and political space, it is essential that feminist policies are implemented," Rego said.

A leader for all Europeans

Casa sees no reason why the issue of abortion should pose a problem during her presidency, which "is certainly more than the sum of a single issue."

It is clear that as a Maltese politician, Metsola has to respect the values expressed time and again by the people in Malta, Casa said, referring to surveys suggesting public opinion remains firmly against abortion in the Catholic country.

Metsola herself told the French newspaper Le Figaro that she didn't recognize herself in the "caricature" that was made of her in some countries. She added that she was fighting for feminist policies, and didn't have a personal problem with abortion.

Even though Aubry would have preferred a different leader for the European Parliament, she said that regardless, her parliamentary group will be eyeing ways to work together with Metsola.

Aubry told DW she hoped Metsola would not only represent Maltese interests — but also those of the entire European Parliament. The majority of lawmakers in Strasbourg has repeatedly condemned anti-abortion developments in Europe.