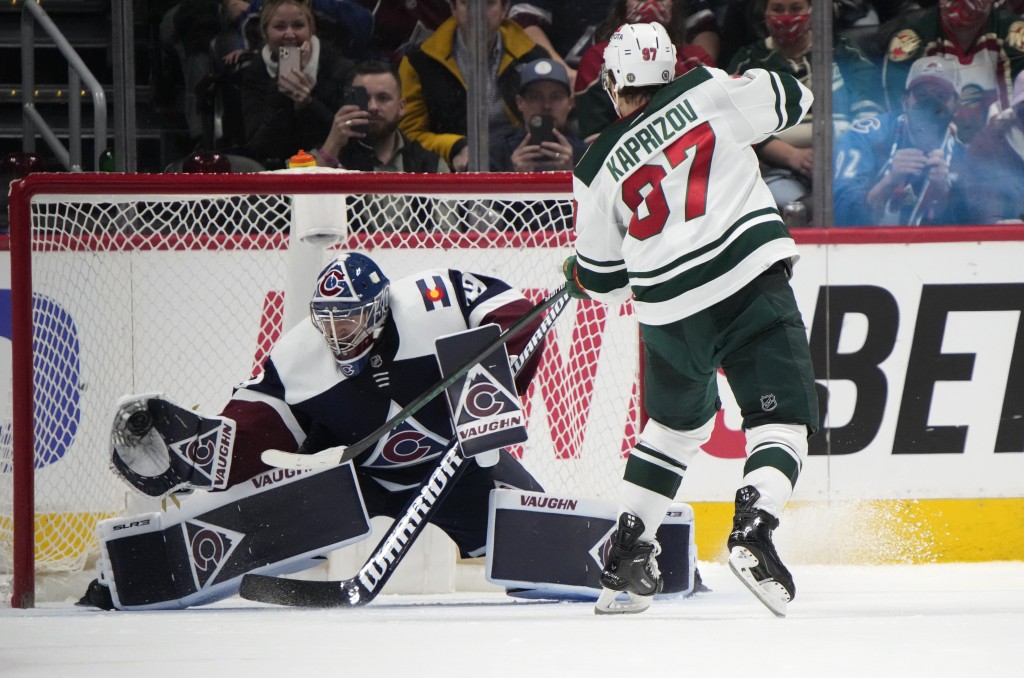 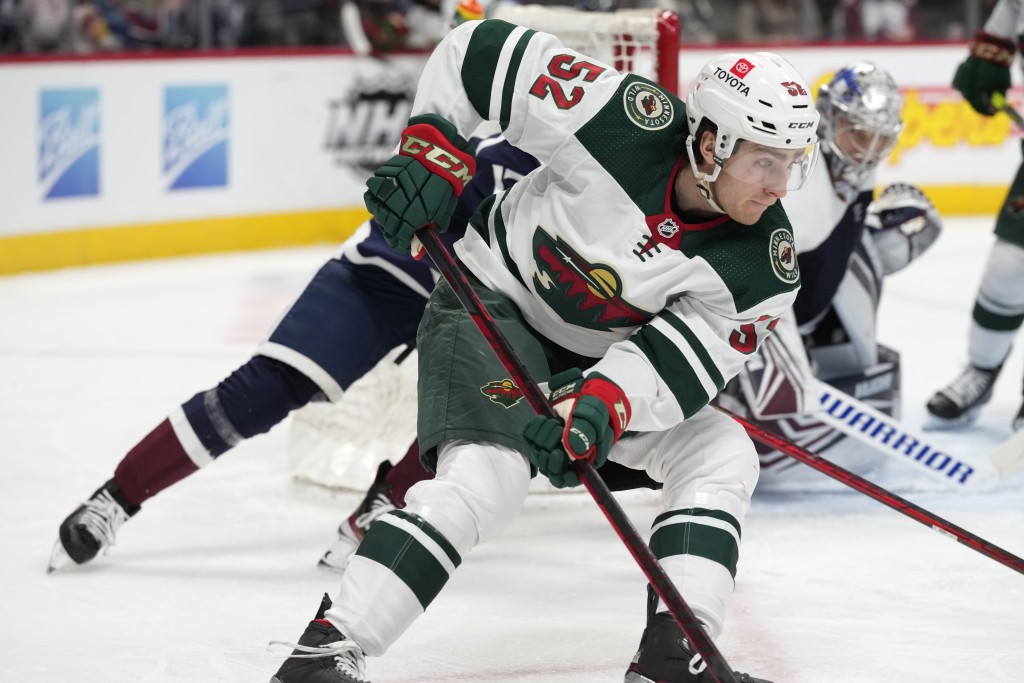 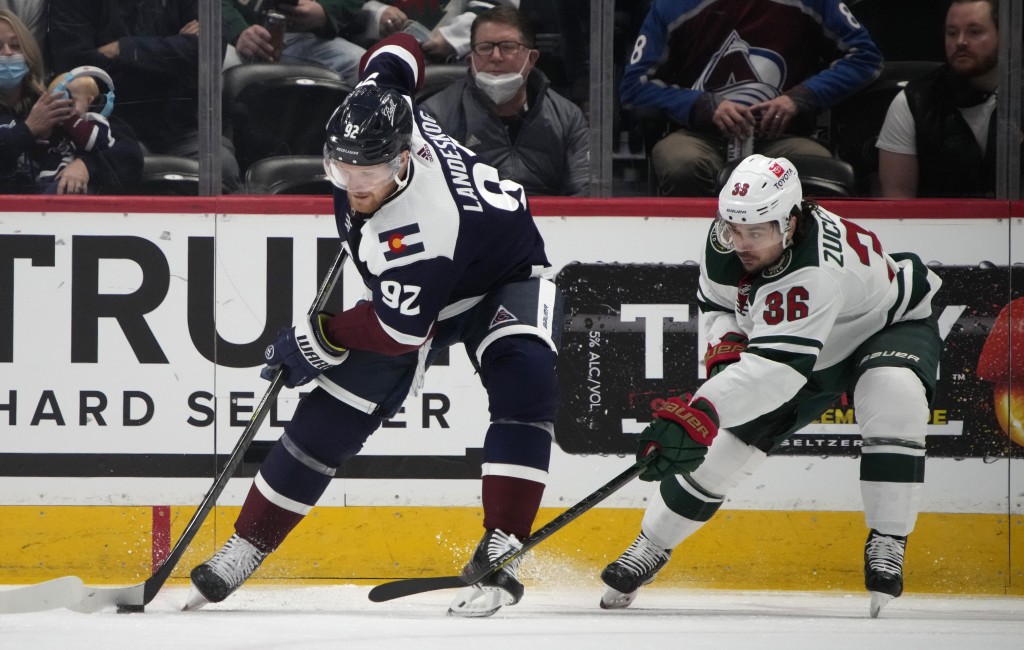 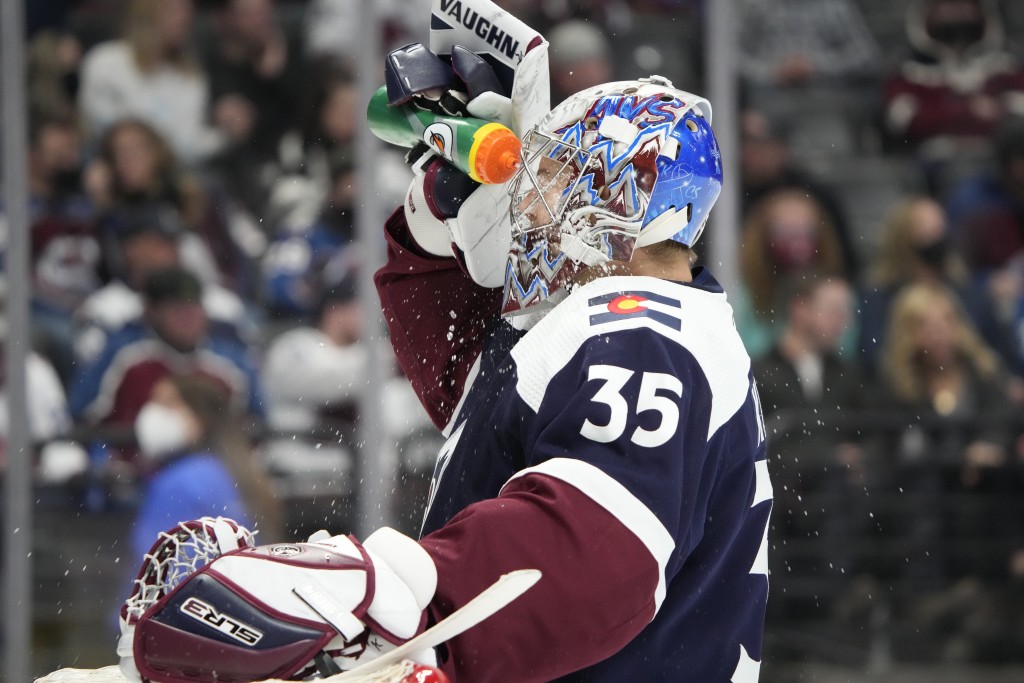 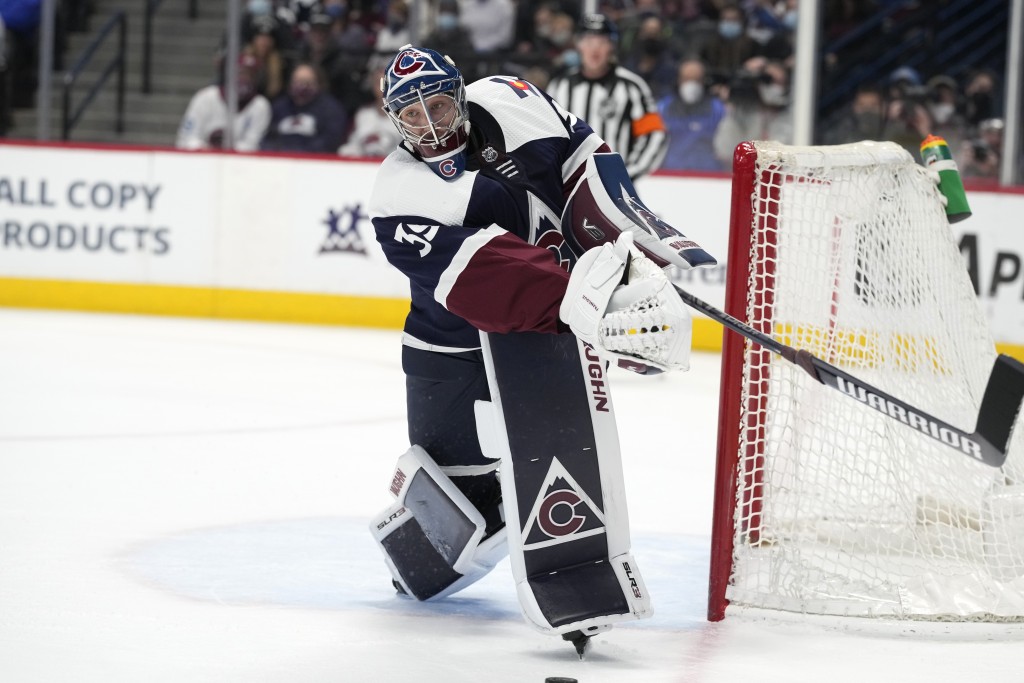 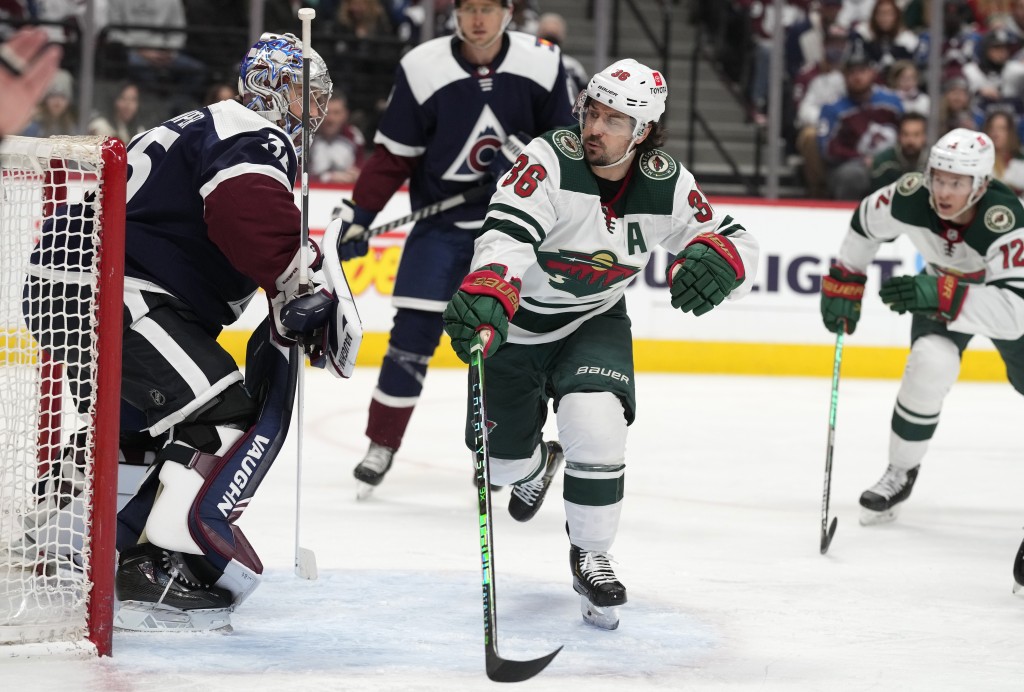 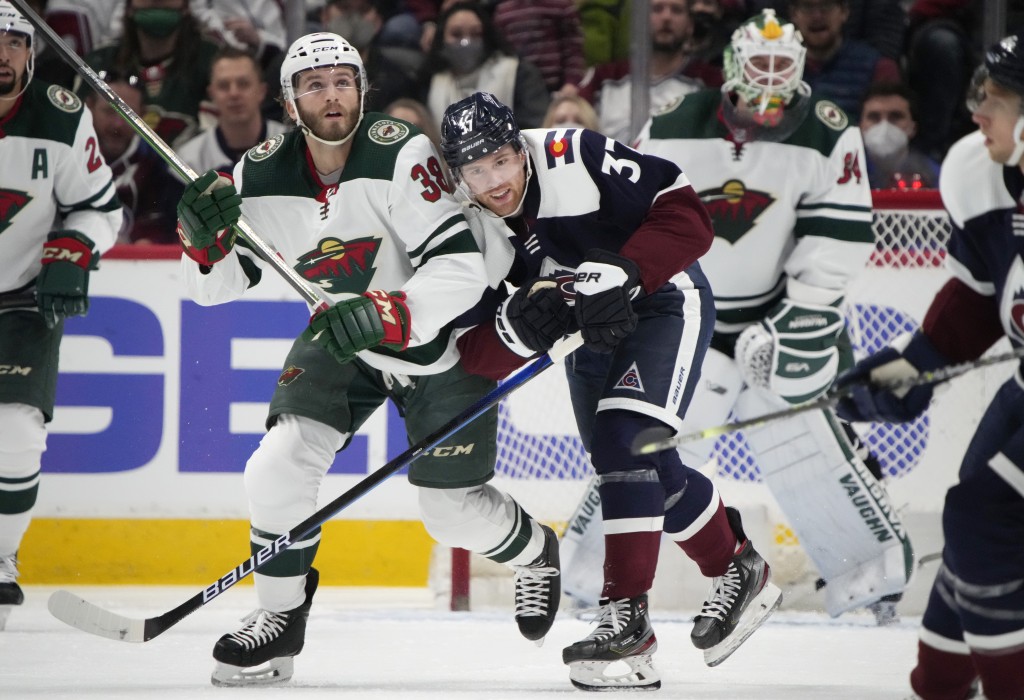 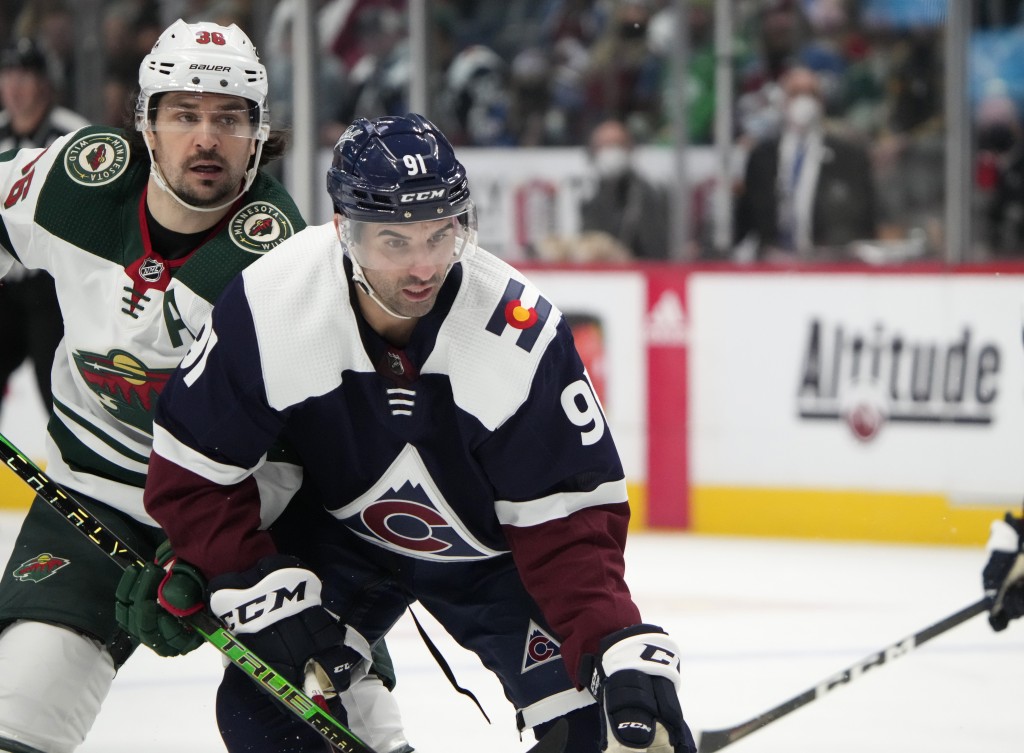 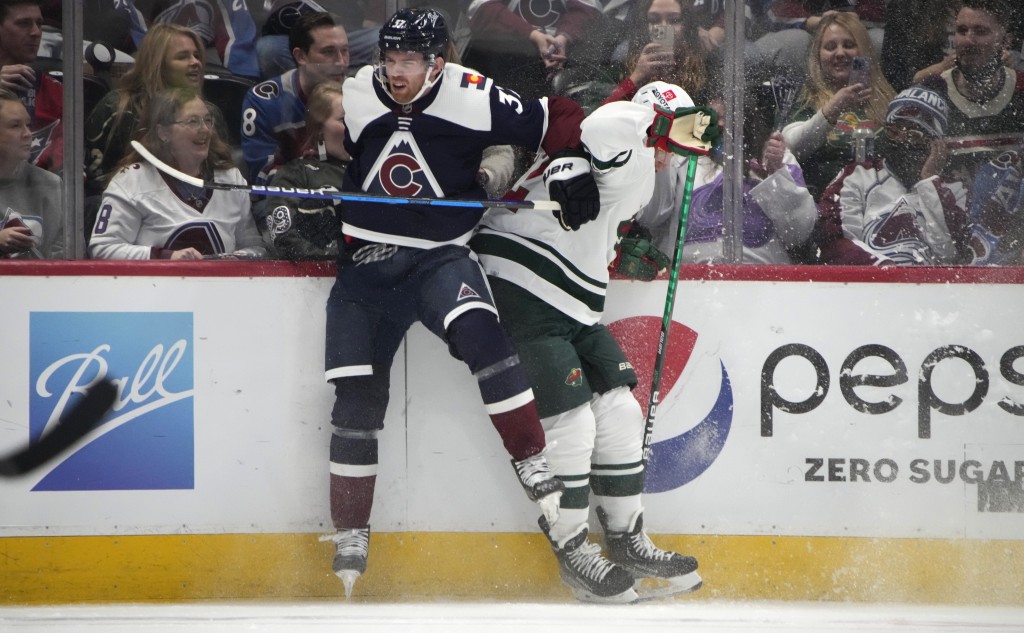 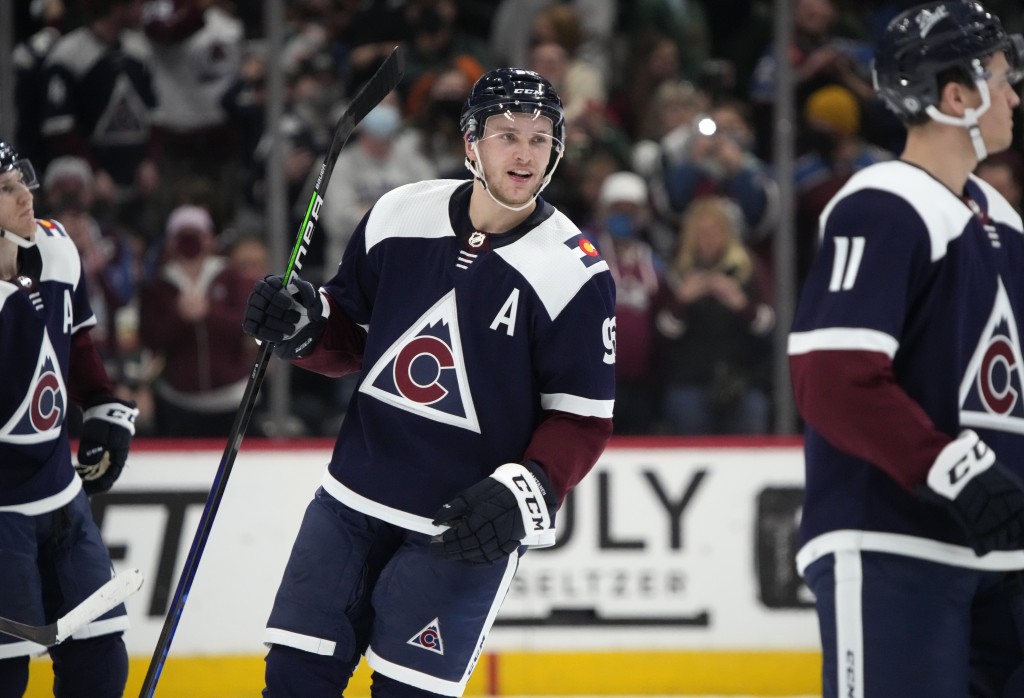 DENVER (AP) — A disputed goal, a questionable hit and a thrilling finish — the Wild-Avalanche rivalry is still going strong after 19 years.

Colorado goaltender Pavel Francouz stopped 25 shots in relief of injured Darcy Kuemper and three more in the shootout, and the Avalanche beat Minnesota 4-3 on Monday for its 14th straight home win.

The teams forged a rivalry when Minnesota upset Colorado in the first round of the 2003 playoffs. Two more postseason upsets in the next nine years — one by each team — and several battles in the regular season kept it alive, and Monday a new chapter was added when Wild forward Jordan Greenway knocked Kuemper out of the game in the second period.

Kuemper was down on ice for a few minutes, but remained in the game until he was replaced by Francouz with 10:34 left in the second period.

“Our (defenseman’s) not riding him in there, so I see him coming across the front of the net and readjust his route to come into Kuemper,” Avalanche coach Jared Bednar said. “It looks like it’s intentional to me and he gets his head. I don’t know how it can only be a two-minute penalty. Our goalie’s out again. I’m sure the league will look at it.”

Kuemper was injured when Greenway ran into him in the crease and knocked him down. The play drew the ire of Kurtis MacDermid, who dropped the gloves with Greenway.

“I think he was maybe out of the crease a little bit. I didn’t even really try to intentionally give it to him,” Greenway said. “I just skated through and ended up clipping him.”

Rantanen’s shootout goal came after Francouz stopped the first two shots. Kaprizov had a chance to extend it but Francouz made a glove save to win it.

“I know him from the KHL, I know he can make some plays and I was trying to be patient,” Francouz said. “He got really close and I tried to put my glove as close as I could.”

MacKinnon gave Colorado a 3-2 lead at 16:28 of the third with a strange goal. His shot went into Kahkonen’s left pad just above the skate, and the goalie’s leg slid into the net. It was originally ruled no goal, but a review determined the puck crossed the line.

Wild coach Dean Evason said the officials told him the league overturned the ruling on the ice.

“So I’m really looking forward to seeing the NHL Network or them sending out that video to see what angle they had that shows the puck in the net because no angles that we have — overhead, everything,” Evason said. “That puck could be in his crotch, it could be anywhere. And sure, you can assume that it’s in the net, but that’s not the rule. That’s not what it’s there for, and I’m really looking forward to the league putting that out. That would be great.”

MacKinnon said he knew it was in but wasn’t sure it would be ruled a goal.

The Wild pulled Kahkonen with 2:57 left and Kaprizov tied it at 17:09 with his 16th goal of the season, sending it to overtime.

Fiala’s goal 33 seconds into the second period. It stayed 2-1 until the third period when Kaprizov scored at 6:46.

NOTES: Mats Zuccarello had two assists for the Wild. ... Avalanche RW Valeri Nichushkin entered health and safety protocols before the game. Kiefer Sherwood was recalled from the AHL to replace Nichushkin in the lineup. ... Minnesota has lost nine of its last 12 games in Denver.

Wild: At Chicago on Friday.

Avalanche: On the road against Anaheim on Wednesday.