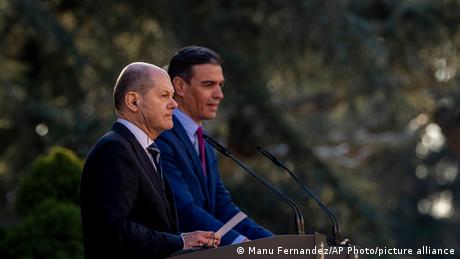 The left-leaning leaders agreed to work closely together regarding EU policies. They also discussed the expansion of clean energy sources in the bloc.

Sanchez had been hoping to get Scholz onboard in supporting the relaxation of the EU's fiscal rules. But the German chancellor, who is in a coalition government with the fiscally conservative Free Democrats (FDP), said it was too early to review the fiscal rules, while emphasizing that "Germany and Spain are close friends.

"The chancellor and I note that we are entering a new phase in our cooperation at European level," Sanchez told reporters after their meeting, citing a "shared vision with this new German government on social and economic progress."

"We coincide in the opinion that the fiscal rules are too complex and hard to comply with," especially in the context of the coronavirus pandemic, he said.

But he added that the two countries were not aligned on how to change the rules, known as the European Stability and Growth Pact.

Germany, under previous Chancellor Angela Merkel, had been considered one of the northern "frugal" members. This was especially apparent from the disputes during the 2010 eurozone debt crisis.

Sanchez has had high hopes for the new German chancellor on aligning their left-leaning governments' agendas and planning on how to support progressive policies in the European Union.

Hopeful for change at EU level

EU finance ministers also met on Monday to discuss the return to the stability and growth pact that had been put on hold during the pandemic.

Scholz said on Monday that there was still a large part of the EU's pandemic recovery fund — €750 billion ($856 billion) in total — that was ready to be spent.

Sanchez thanked Scholz for his role in facilitating the recovery fund while serving as Germany's finance minister under Merkel.

"Scholz played a leading role in this matter. I thank him for that," Sanchez said.

Even though the chancellor did not support Sanchez's plea for relaxed fiscal rules, the Spanish prime minister still considers a shakeup of the European Union's fiscal policy a possibility.

The general secretary of the European Parliament's Socialist bloc and a member of Scholz's Social Democrats (SPD), Achim Post, has pointed out that left-wing parties are now in charge in Spain, Portugal, Germany and the Nordic countries, suggesting that a change to the fiscal rules could be on the horizon.

Scholz, who campaigned on environmental policies, and is also in a coalition with the German Green party, celebrated the joint ambitions of the two countries.

"Spain and Germany are both very ambitious. We want to achieve fast progress in the expansion of renewables," the chancellor said.

"The expansion of wind and solar power — that is important. And, of course, this also includes doing everything we can to make this an economically successful enterprise, to ensure that the grids are good and that there are good connections between us and our neighbors," Scholz said.