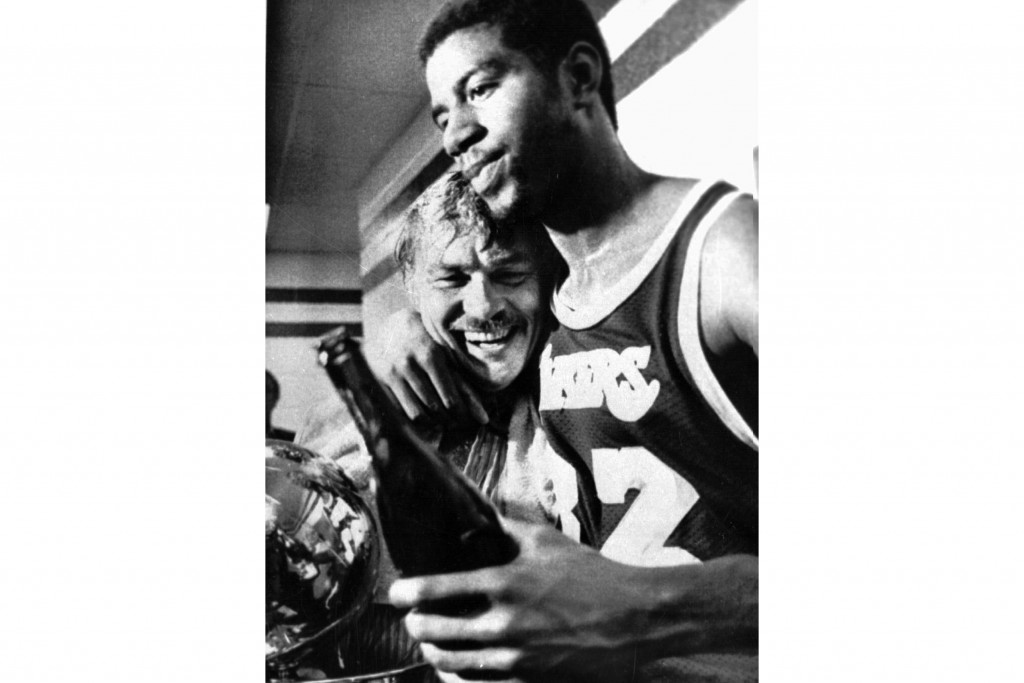 PHILADELPHIA, Pa. (AP) — Rookie Earvin “Magic” Johnson steps in and plays center for the injured Kareem Abdul-Jabbar in Game 6 of the NBA Finals with his Los Angeles Lakers holding a 3-2 series lead over the Philadelphia 76ers. Johnson, a 6-foot-9 point guard, finishes with 42 points, 15 rebounds and seven assists to help the Lakers clinch the title with a 123-107 win over the Philadelphia 76ers. The Associated Press is republishing verbatim the story on Johnson's position switch to help clinch the title on May 16, 1980:

Rookie Earvin “Magic” Johnson took over the center role because of the loss of Kareem Abdul-Jabbar Friday night and scored 42 points to give the Los Angeles Lakers the National Basketball Association championship with a 123-107 victory over the Philadelphia 76ers.

With the 7-foot-2 inch Abdul-Jabbar sitting home with a severely damaged ankle, the 6-8 Johnson combined with Jamaal Wilkes for 79 points as the Lakers closed out the series four games to two for their first championship since 1972, when they beat the New York Knicks.

“We did it for Kareem,” said Johnson. "He carried us this far and I'm sorry he couldn't be here. I want to send him my thanks and my love.

The victory completed a rare sweep for Johnson, who won the National Collegiate championship with Michigan State last season. Only two other players have won NBA titles in their rookie seasons after capturing NCAA crowns the previous year — Bill Russell and Henry Bibby.

“This is unreal. This is it. You can't go any higher than this. This has to be my greatest thrill in basketball,” Johnson said after Friday's game.

Johnson said he just tried to play wherever he was needed.

“We couldn't play a half-court game with them because they were just too big.”

Philadelphia Coach Billy Cunningham said Wilkes was awesome and, as for Johnson, “If you ask me to compare him with Larry Bird (Boston's rookie), I'd have to take Johnson.”

The key to the Lakers' unexpected triumph on the 76ers' court was a 14-0 surge at the outset of the third period that turned a 60-60 deadlock into a 74-60 Los Angeles lead.

In that third period, the Lakers scored 33 points, with Wilkes accounting for 16 and Johnson nine as the Lakers took a 93-83 lead at the end of the quarter.

The Eastern Conference champion 76ers, however, rallied to within a basket three times in the final quarter.

But Johnson and Wilkes took over and scored five consecutive points to give Los Angeles a seven-point advantage at 108-101 and the Western Conference champions never were threatened after that.

Julius “Dr. J” Erving led the 76ers with 27 points but the Lakers' dogged double-teaming, especially in the final period, kept Erving from dominating the game in his usual style after the 76ers pulled within two in the waning moments.

The Lakers were decided underdogs when they came to town leaving behind Abdul-Jabbar to rest a sprained ankle in the hope he could play if a seventh game was necessary in Los Angeles Sunday.

But rookie Coach Paul Westhead turned loose a bunch of rabbits, who beat the Sixers at their own game — the fast break.

Westhead became head coach of the Lakers early in the season after Jack McKinney suffered a head injury in a fall from a bicycle. Los Angeles Dr. Jerry Buss announced this week that McKinney would not be back and that Westhead would receive serious consideration to keep the job.

The Sixers were unable to take advantage of the missing Abdul-Jabbar by establishing an inside game with 6-11 1/2 Darryl Dawkins and 7-foot Caldwell Jones. The Lakers used quickness and fast hands to make numerous steals and successfully blocked out Philadelphia's driving backcourt men from taking advantage of the lane.

After the Lakers opened up their 74-60 lead in the first minutes of the second half, the Sixers chipped away with evenly divided scoring among Erving, Mix, Bobby Jones and Maurice Cheeks. By the end of the third period, they had reduced the 14-point lead to 10.

The pace slowed considerably at the start of the fourth quarter with Philadelphia scoring the first points on two free throws by Lionel Hollins with 10:57 remaining to reduce Philadelphia's deficit to eight at 93-85. Mark Landsberger tapped one in for Los Angeles to make it 95-85, but Hollins hit an 18-footer and the Lakers again led by just eight with 10:22 left.

Philadelphia still trailed by eight with 8:55 to go but Erving scored twice to make it 97-93 and Bobby Jones tapped in an Erving miss for 97-95, sending the sellout crowd of 18,076 into hysterics.

Jim Chones, however, came back with a 10-foot hook shot in the lane to boost the lead back to four. The teams traded baskets until Johnson tapped in a rebound and Wilkes drove for a layup that started the Lakers' final surge to wrap up the title.

The 6-8 Mix, a nine-year veteran, hit for 18 for the Sixers and Dawkins, who was almost invisible despite the absence of Abdul-Jabbar, made just 14 and was ineffective through most of the game.

Since the Lakers were transferred from Minneapolis in 1960 to Los Angeles, they have been runners-up six times, despite a franchise that has boasted such standout players as Jerry West, Elgin Baylor, Wilt Chamberlain, Gail Goodrich and Abdul-Jabbar. They failed to live up to the legacy of five championships left to them by Minneapolis, which featured George Mikan, Vern Mikkelson and Jim Pollard.

Their drive to the Western Conference title and the NBA championship was keyed by Abdul-Jabbar, who averaged 33 points in the first five games of the series. He scored three points at the end Wednesday night to snap a 102-102 tie and give the Lakers their 3-2 edge.

Abdul-Jabbar came to Los Angeles in 1975 from Milwaukee for two players and a pair of draft choices.

It' shard to say a team did not miss a player of Abdul-Jabbar's caliber, but the 215-pound Johnson played like a man with a mission. He seemed determined to make up for Abdul-Jabbar's presence all by himself with 13 points in the first period and nine in each of the next two quarters and 11 in the last period for his total of 42.

Still, Johnson couldn't do it alone. The 6-6 Wilkes, a five-year veteran from UCLA, and the 6-11 Chones, a seven-year man from Marquette, offered crucial help.