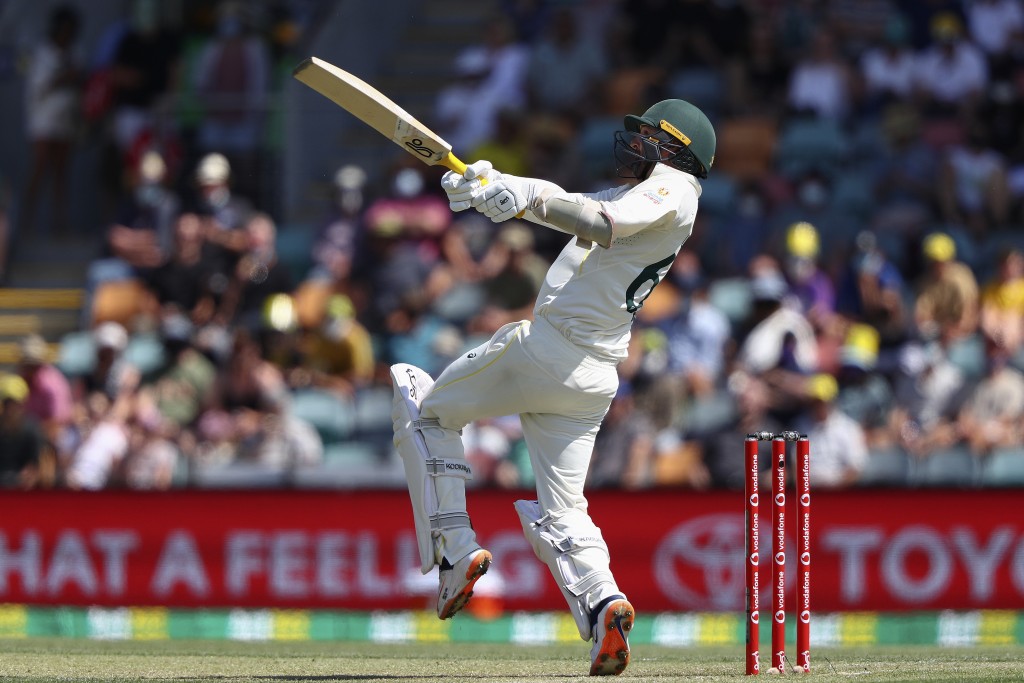 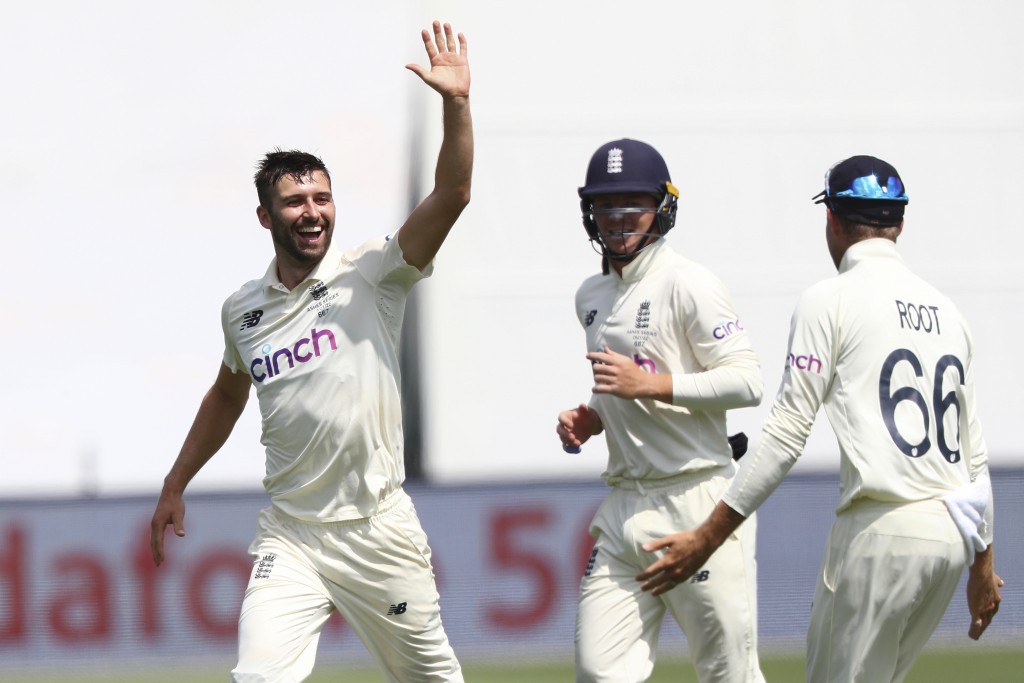 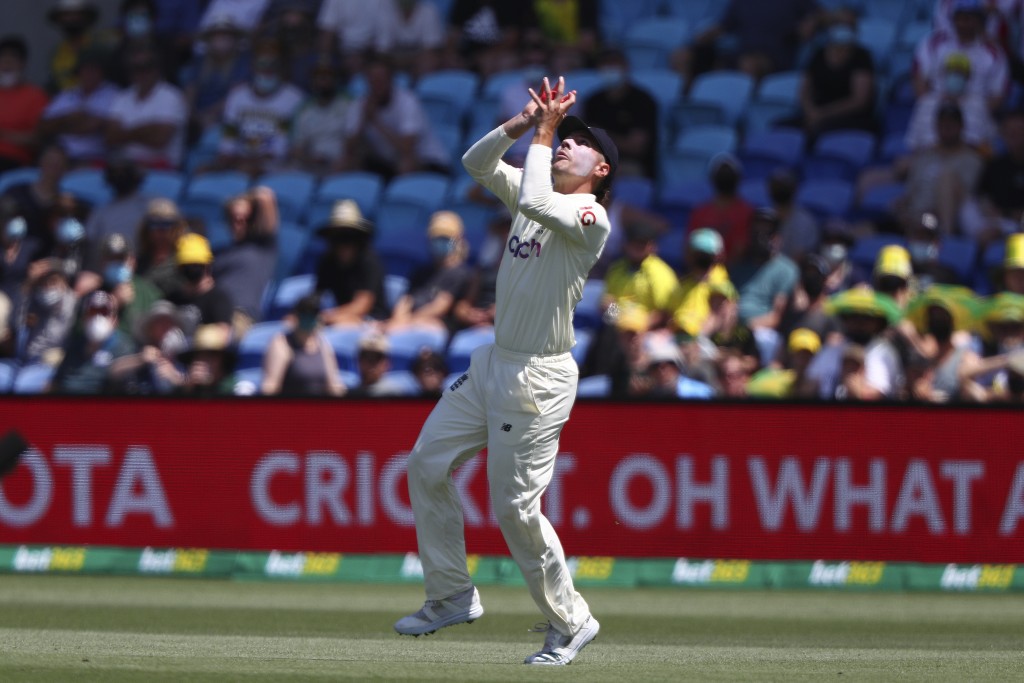 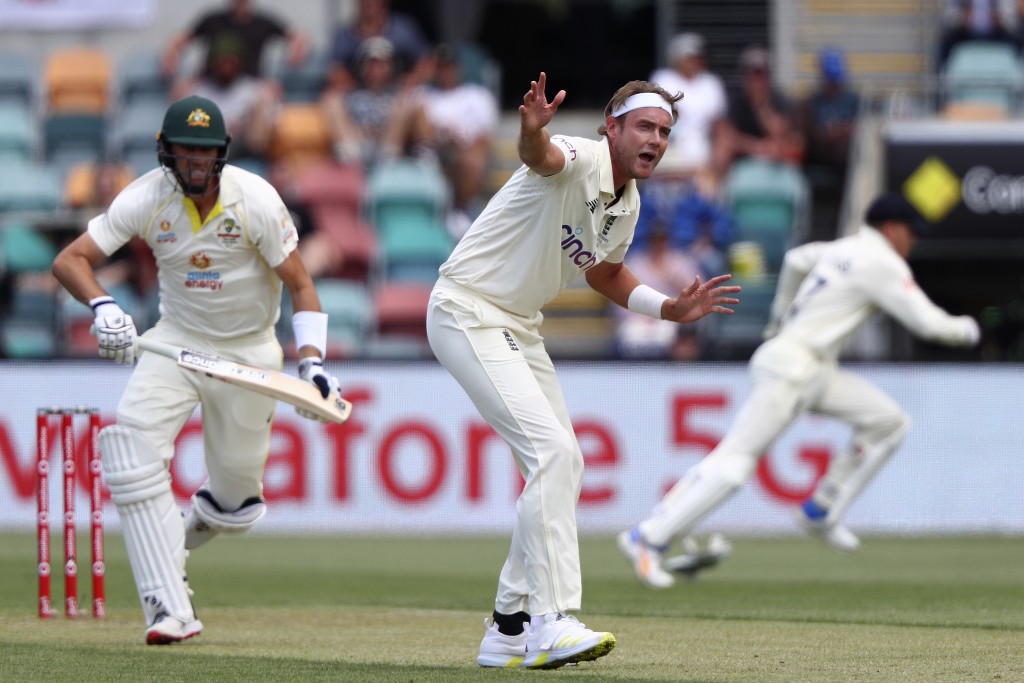 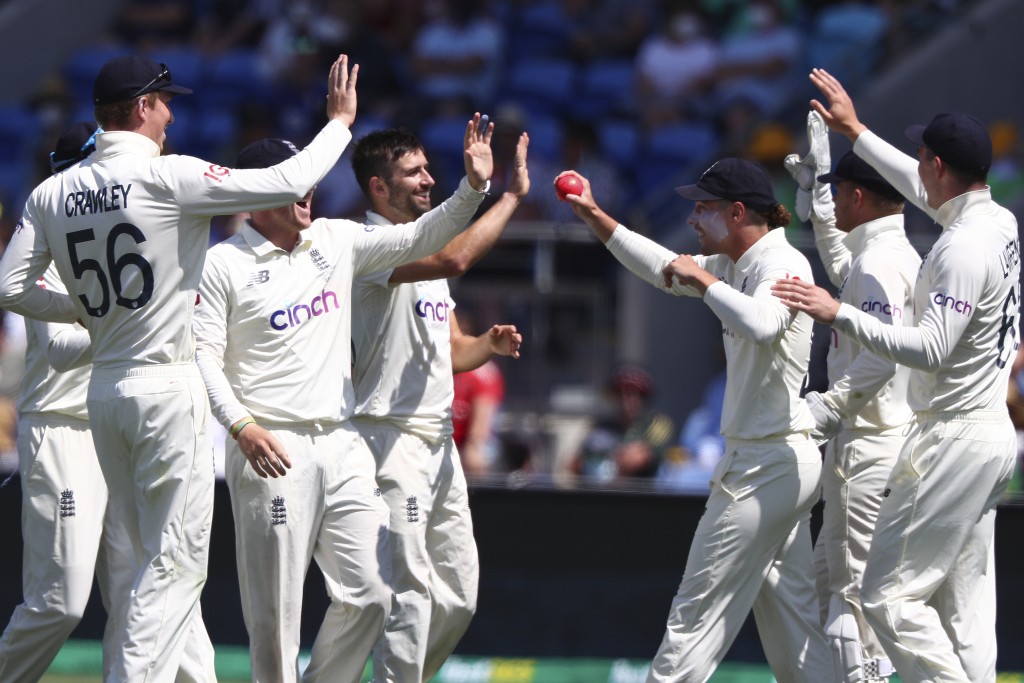 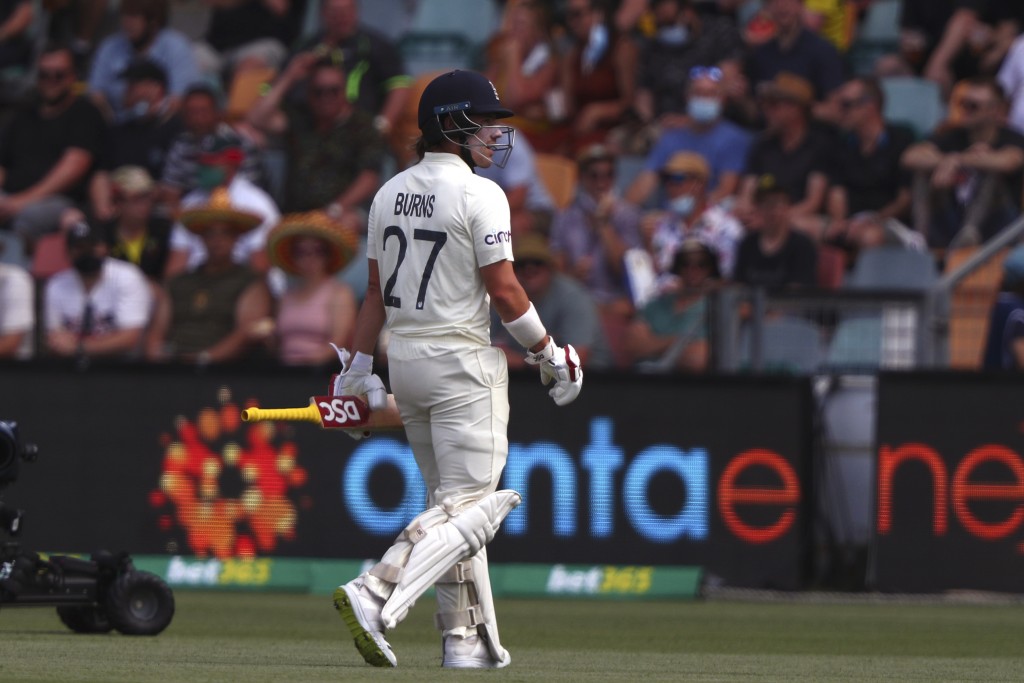 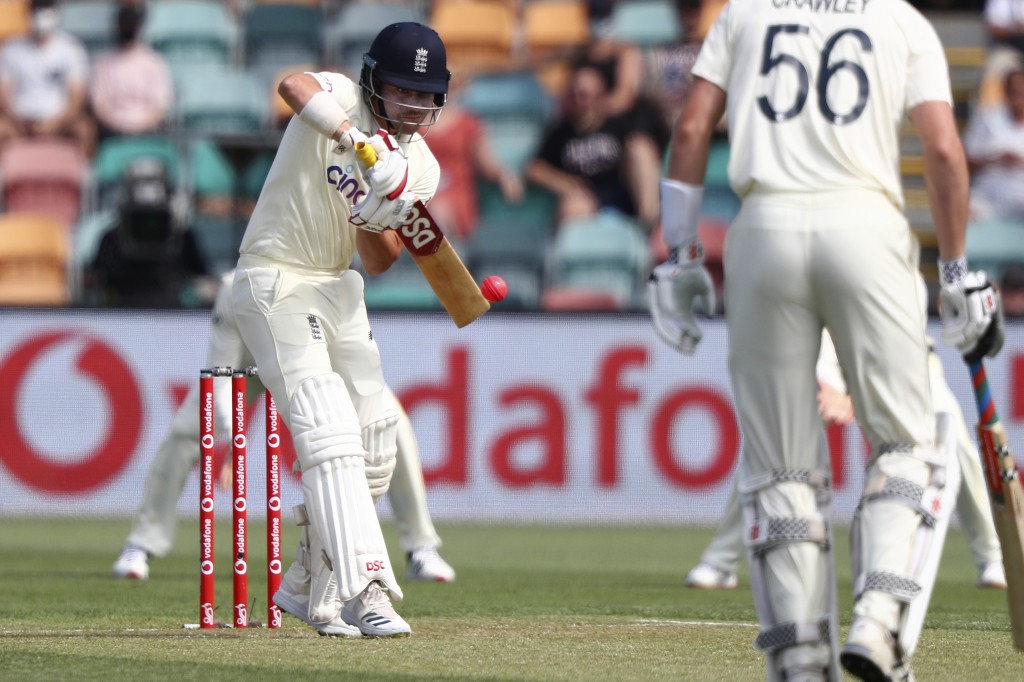 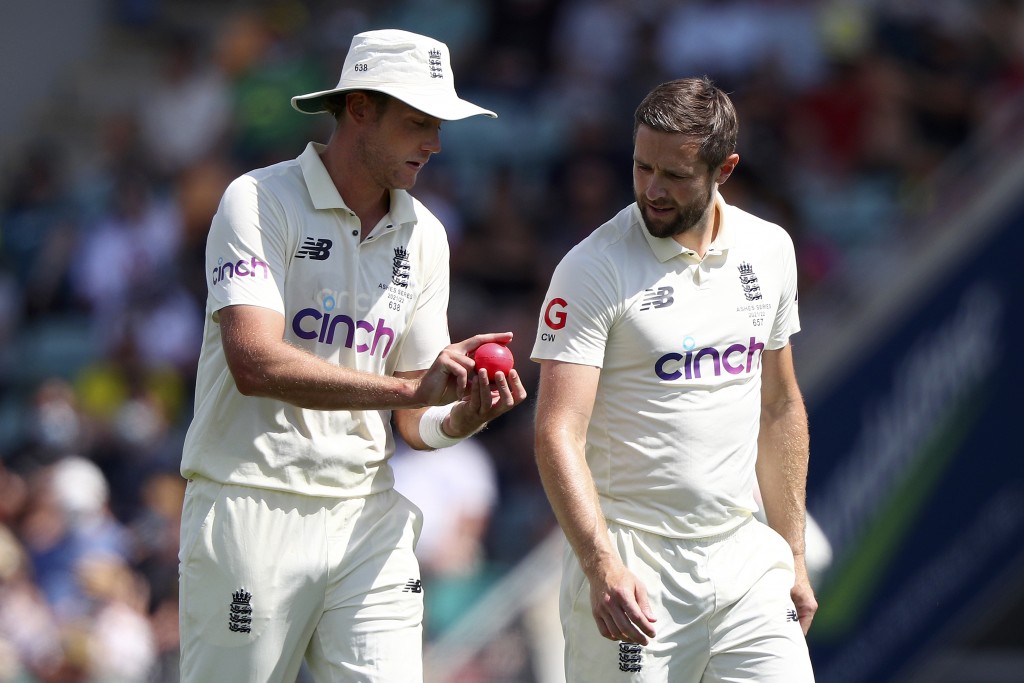 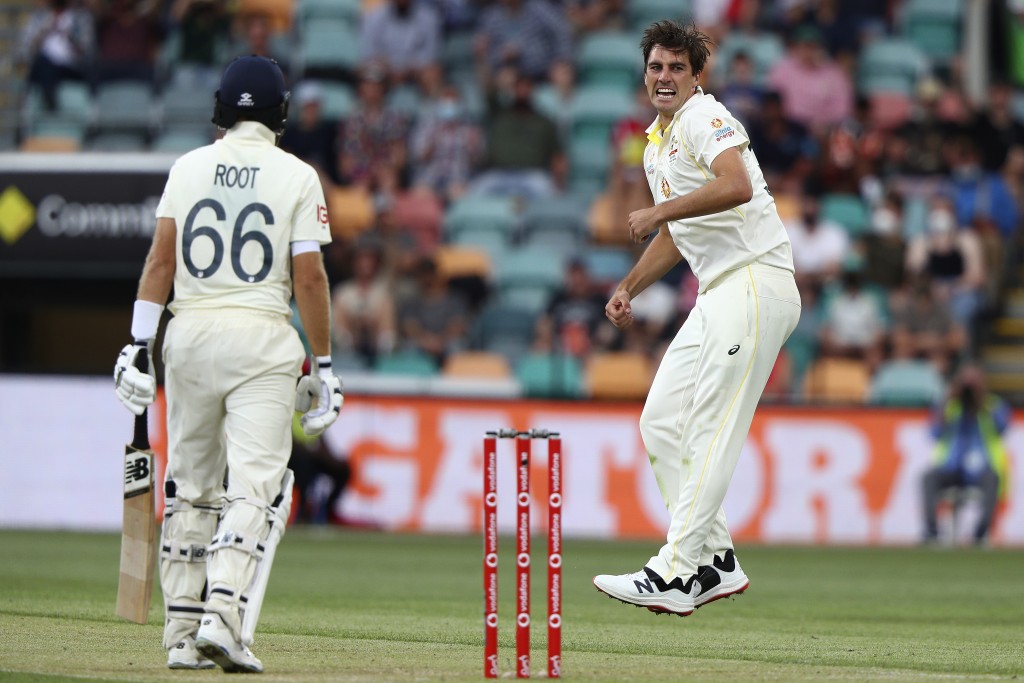 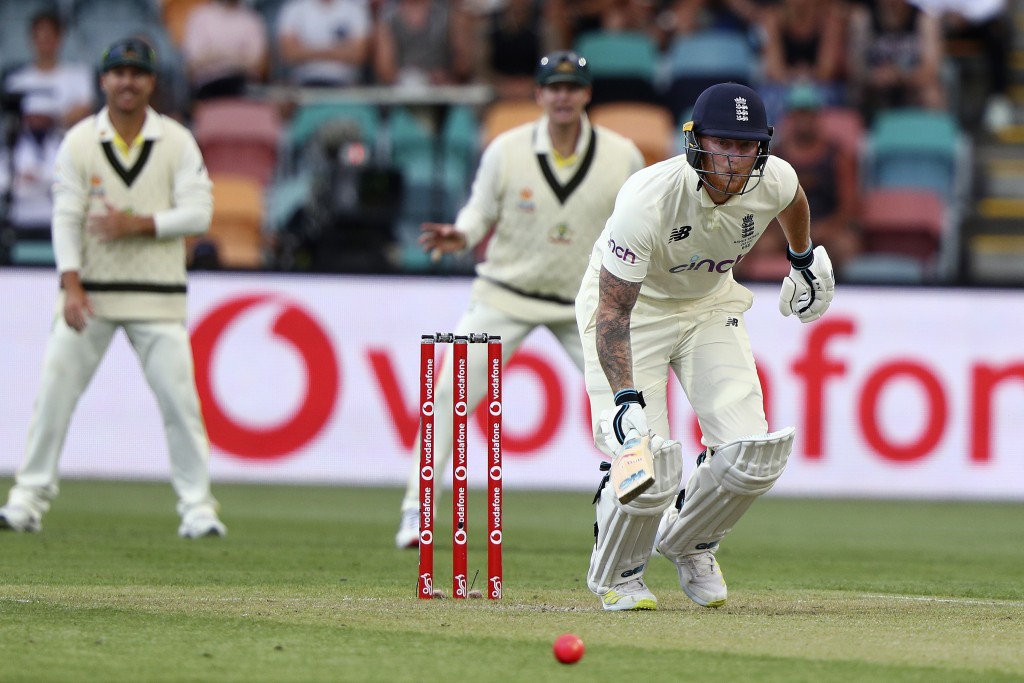 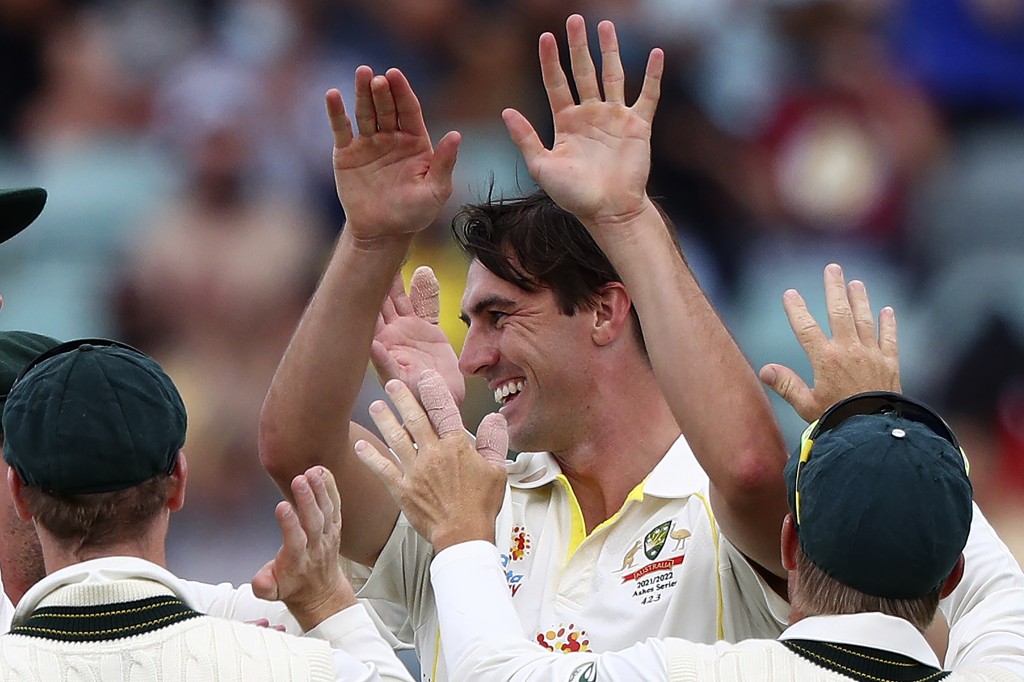 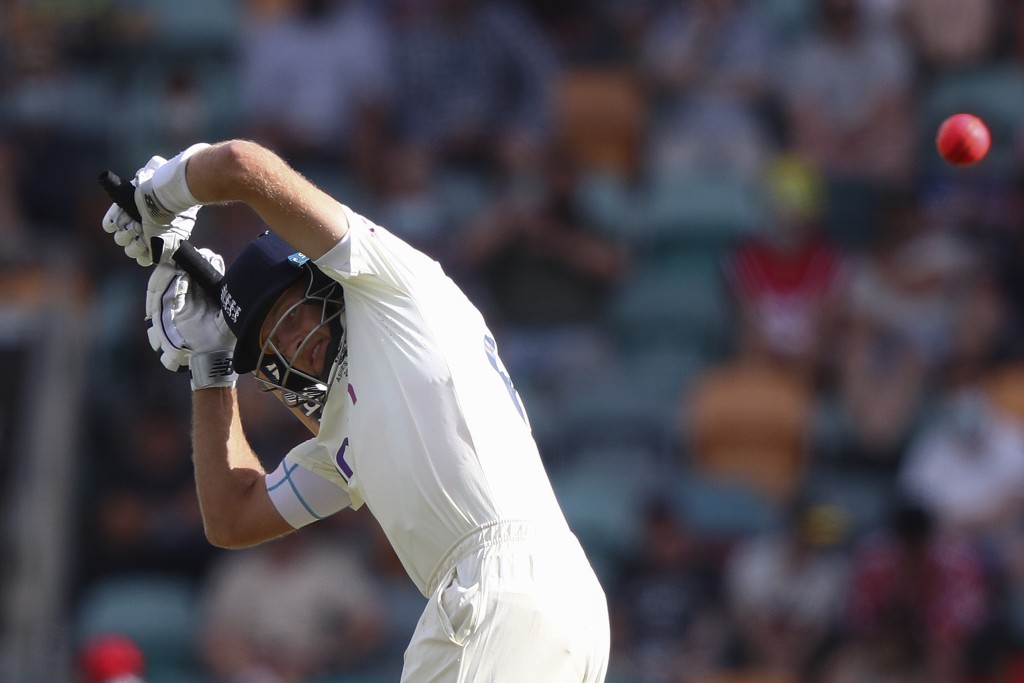 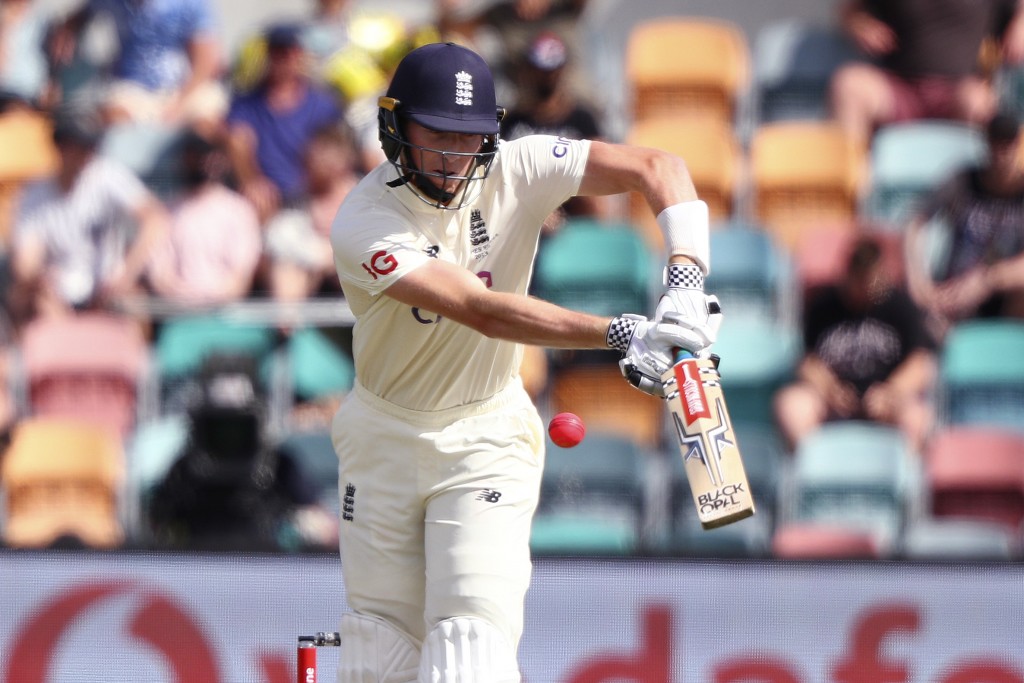 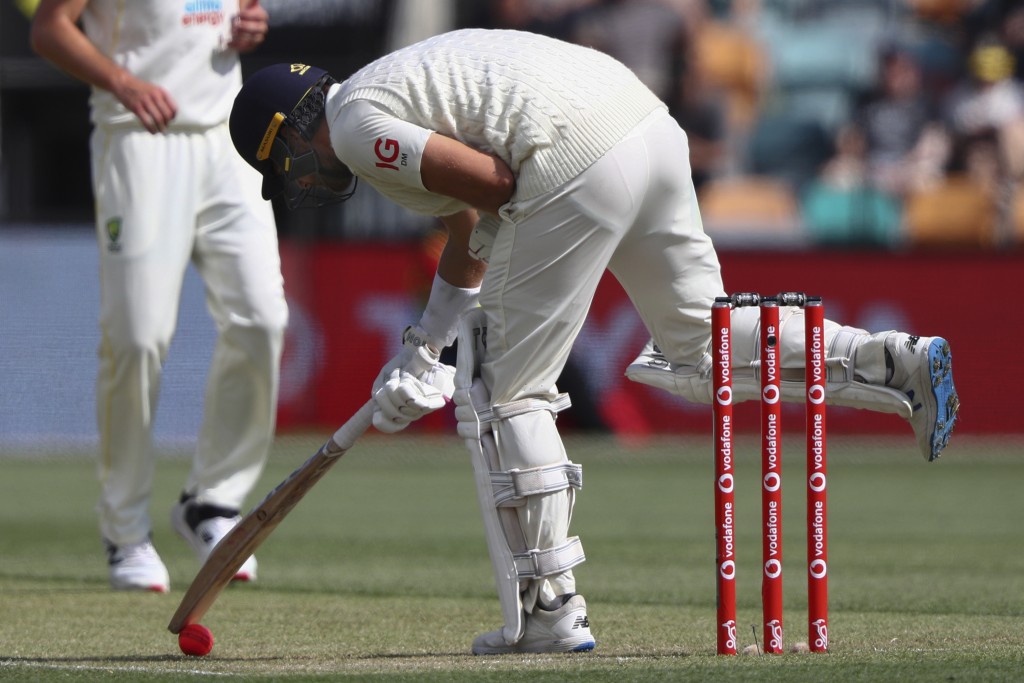 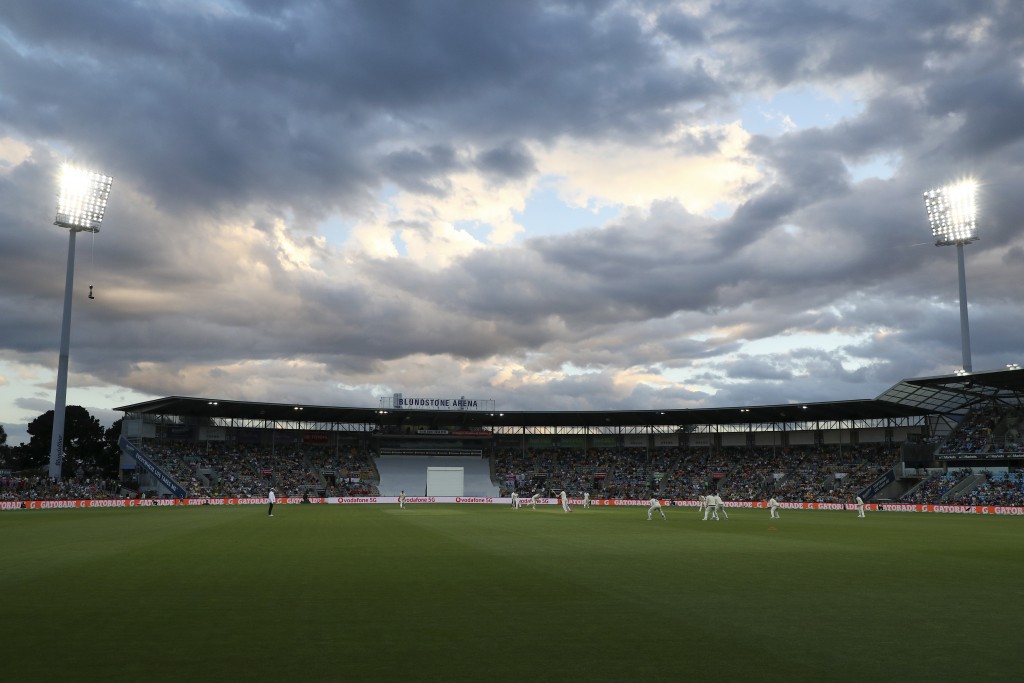 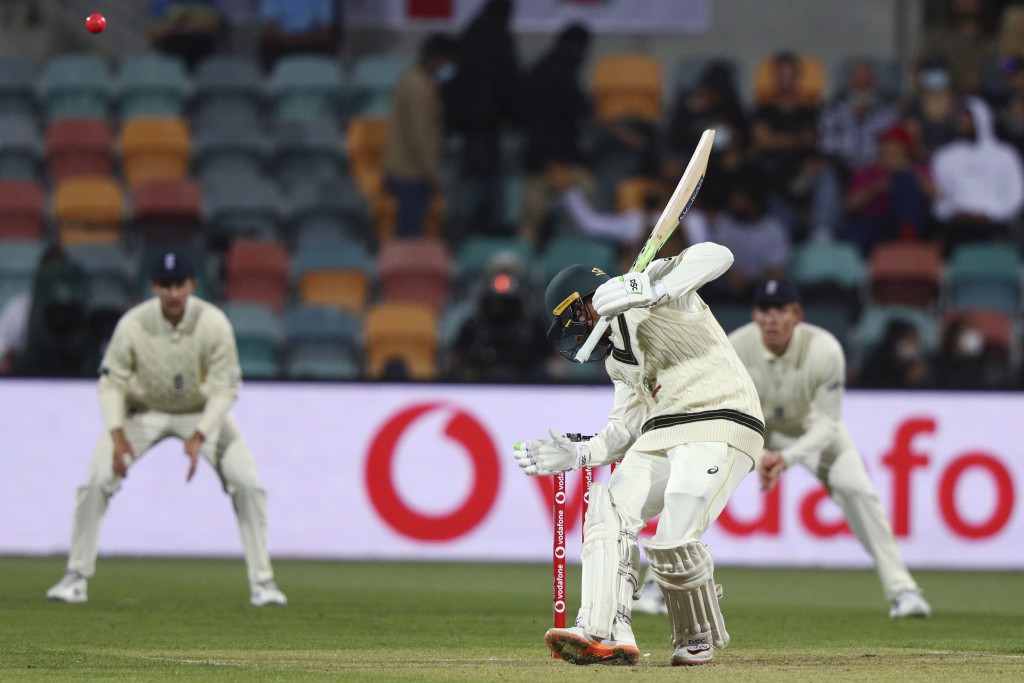 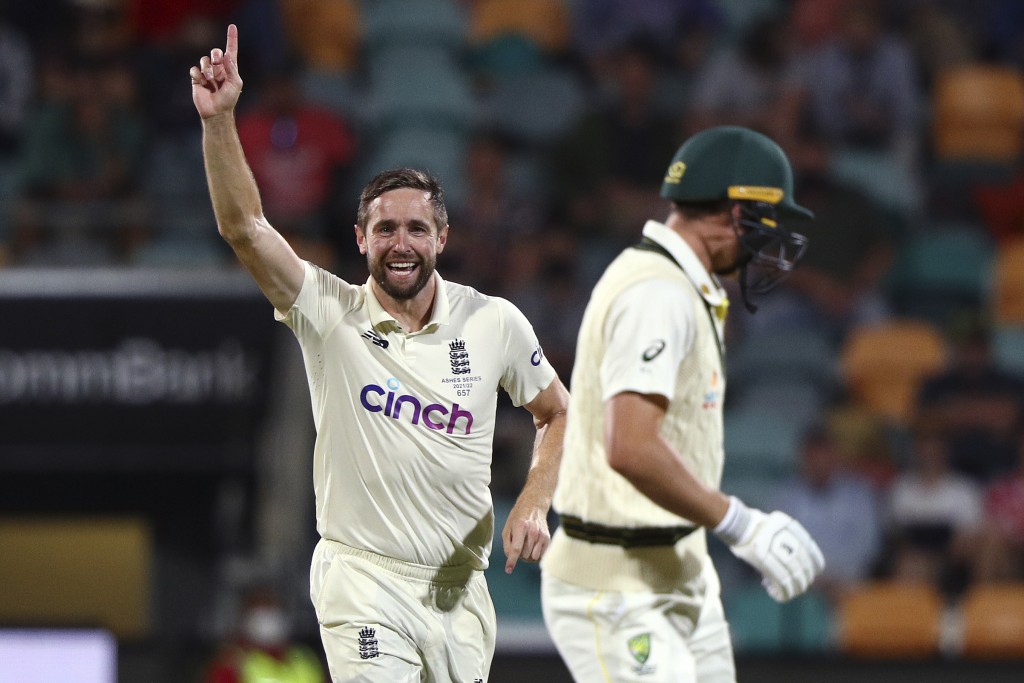 HOBART, Australia (AP) — Australia yet again rolled over England in the Ashes for a below-par score of 188 as 17 wickets tumbled against pace on the second day of the fifth test on Saturday.

Australia, which was bowled out for 303 before lunch, did not require the offspin of Nathan Lyon to grab a 115-run first-innings lead as captain Pat Cummins led the charge with 4-45 and Mitchell Starc grabbed 3-53.

Scott Boland was unlucky after Chris Woakes (36) got twice dropped in the slip cordon to finish with 1-33 and Cameroon Green (1-45) got the wicket of debutant Sam Billings, who made 29.

England fast bowlers Stuart Broad and Mark Wood bowled with similar intensity of the Australian pace quartet as the home team stuttered to 37-3 at stumps at the day-night test for an overall lead of 152 with seven wickets in hand.

Steve Smith was unbeaten on 17 while nightwatchman Boland braved the barrage of short-pitched deliveries to stay not out on 3 off 25 balls.

David Warner got a pair in a test match when Broad had him caught at point off the third ball and Marnus Labuschagne also fell cheaply for 5 to Woakes before Wood undid Usman Khawaja (11) with a brutal short ball on a day when fast bowlers entirely dominated batters with the pink ball.

The endless batting woes of England in the Ashes saw its top order yet again struggle against the seam and swing of Cummins and Starc, who both beat the batsmen outside the off stump in a superb display of fast bowling.

Joe Root (34) and Dawid Malan (35) tried to resurrect the innings with a 49-run third-wicket stand after both openers fell cheaply before dinner break.

Rory Burns, recalled for the final test, was run-out for a duck while going for a needless run and Travis Head took a sharp catch from Zak Crawley (18) at forward short leg as England reached 34-2 at the dinner break on the second day.

But Cummins struck in quick succession after the break, getting Malan caught behind down the legside and then brought one back sharply to pin down Root leg before wicket.

Ben Stokes (4) was brilliantly caught low down at point by Lyon off Starc before Boland could have got two-in-two balls. Ollie Pope (14) got an edge of tall Boland but the very next delivery saw Warner dropping a sitter off Woakes’ thick outside edge.

Starc and Cummins, however, ended England’s poor show by sharing the last three wickets before England challenged Australia in a tough hour-and-a-half.

Lyon (31) had earlier scored half of the runs Australia added in the afternoon after resuming at 241-6.

Wood (3-115) took two quick wickets of Starc (3) and Cummins (2) but Lyon hit the fast bowler for three sixes and a square driven boundary much to the frustration of England.

Broad wrapped up the innings when he clipped the bail to bowl Lyon and finish with 3-59, but England sorely missed Ollie Robinson (2-24), who had back spasms and couldn’t bowl after delivering eight overs on Day 1.

Robinson had Australia on the mat at 12-3 inside the first 10 overs, including an opening spell that removed David Warner and Steve Smith for ducks on Friday, before Head’s second century of the series and an invaluable 74 by Cameron Green rescued Australia’s innings.

England has already lost the Ashes after dropping the first three test matches and drawing at Sydney.