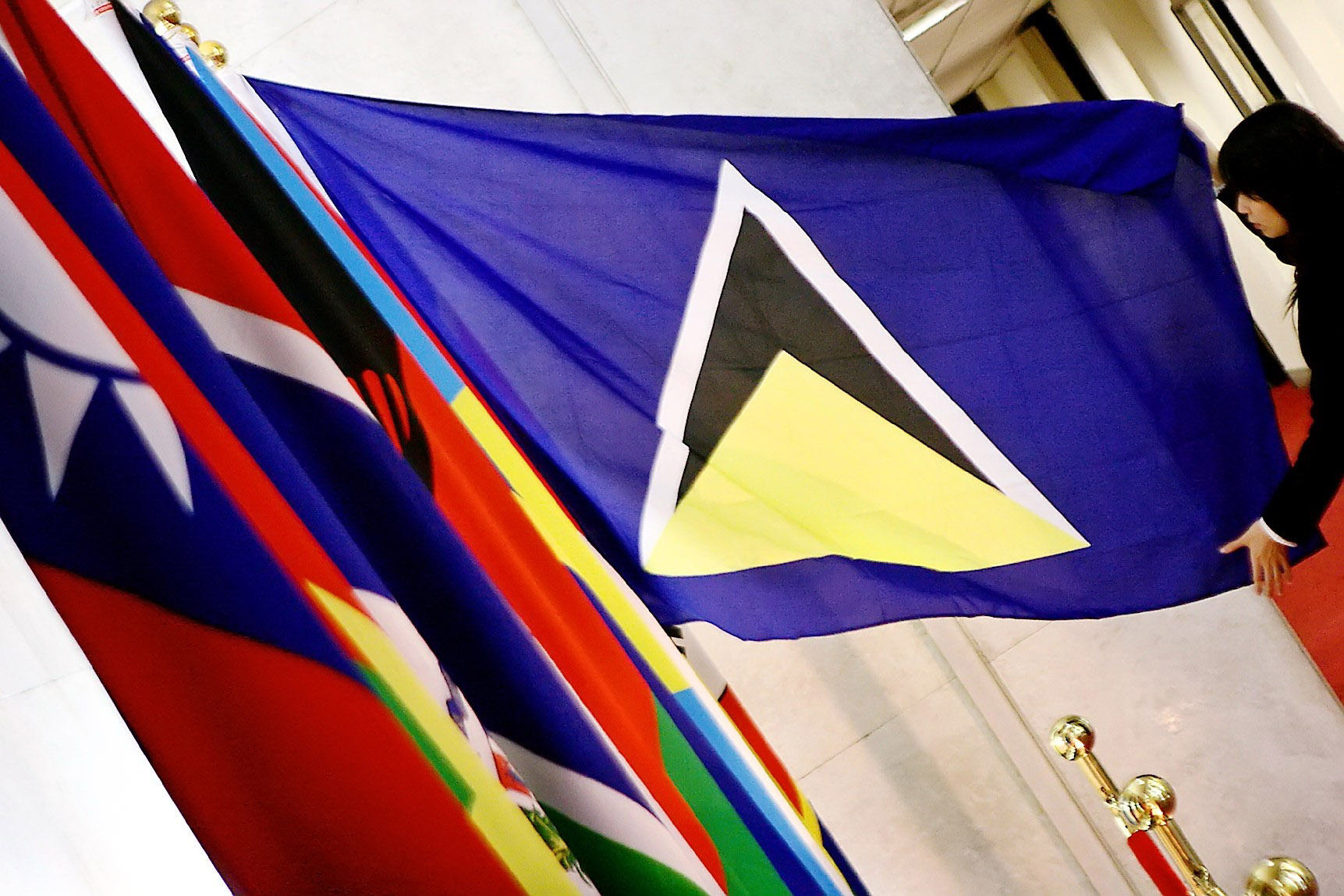 St. Lucia became Taiwan's newest ally on Monday night when the government of the Caribbean country officially resumed diplomatic ties with the Republic of China, foreign minister James Huang (黃志芳) announced yesterday via teleconferencing from the St. Lucia capital Castries.
"After a four months of negotiations, Taiwan and St. Lucia finally reestablished diplomatic relations," Huang said. "It goes to show that despite China's relentless obstruction, Taiwan can still make new friends because it is a highly respected country in the international community."
The newly forged bilateral ties will strengthen the friendship that already existed between the two countries, he added.
Huang noted, however, that the new alliance should not be viewed as a victory in the ongoing diplomatic rivalry with China, but rather as stellar achievement of the Taiwan government after months of proactive negotiations with St. Lucia.
"Taiwan will never be able to compete with China by engaging in the so-called dollar diplomacy," Huang pointed out. "What we offer is our good reputation and sincerity."
He further stressed that Taiwan has not and will never demand that any of its allies, including St. Lucia, should terminate ties with China.
Taiwan also established an embassy in St. Lucia the same day the communique was signed, but the MOFA has not yet named an ambassador to the country.
Speaking to reporters yesterday, Huang said the Taiwan government will, in the shortest time possible, send teams of agricultural experts to St. Lucia to share farming techniques and to provide assistance on other development projects.
The news of the alliance had spurred much protest from the Bejing government who repeatedly called on Castries to "cool" its warming association with Taiwan. At the moment, St. Lucia is the only country that has diplomatic relations with both the Republic of China and the People's Republic of China.
In an official statement yesterday, the Chinese foreign ministry demanded St. Lucia "rectify the wrong decision" it made in resuming ties with the "so-called Taiwanese government."
So far China has not officially ended its relations with St. Lucia but is expected to do so in the next few days.
BBC Caribbean reported that the Chinese have stopped work on a 27 million EC dollar psychiatric hospital on the island but that Taiwan has promised Prime Minister Sir John Compton and the ruling United Workers Party that it will continue and complete all ongoing projects being funded by China.
The new alliance was not welcomed in all quarters in St. Lucia, as former attorney general Phillip La Corbinere who heads the opposition Labor Party, told BBC Caribbean last week that Taiwan's contribution to St. Lucia during an earlier stint of relations had not been that significant.
"When the Taiwanese were here before, their main thrust was in the agriculture sector," La Corbinere said. "They were doing a lot of research, for example, the questions that I have asked and put on the table is, to what extent did we see a transfer, a real transfer of technology of research to St. Lucia. My information is that we did not."
He suggested that St. Lucia was bucking the international trend by throwing in its lot with Taiwan which has only about two dozen allies worldwide, including four in Caribbean.
Taiwan and St. Lucia first forged ties in 1984 under a previous United Workers Party government led by Compton. The ties were later terminated in 1997 when St. Lucia switched recognition to China.
The new alliance will boost Taiwan's pool of allies from 24 to 25. St. Lucia is also the third country after Kiribati and Nauru, to resume formal relations with Taiwan since the Democratic Progressive Party came to government eight years ago.
However, Taiwan has lost Chad, Senegal, Macedonia, and East Timor to China within the same time frame and the Vatican, Taiwan's only European ally, has also intimated that would like to form relations with China.
"Taiwan is always seeking to make new friends," said Huang in response to questions on Taiwan's recent attempt to woo other countries in the Caribbean and Central and South American region.
According to a Caribbean newspaper, Taiwan has offered development aid of up to US$150 million to Suriname in exchange for formal diplomatic recognition. The gesture was rejected by Suriname on Monday when the country's Foreign Affairs Minister Lygia Kraag-Keteldijk disclosed that a formal choice had been made to stick with China, the paper reported.