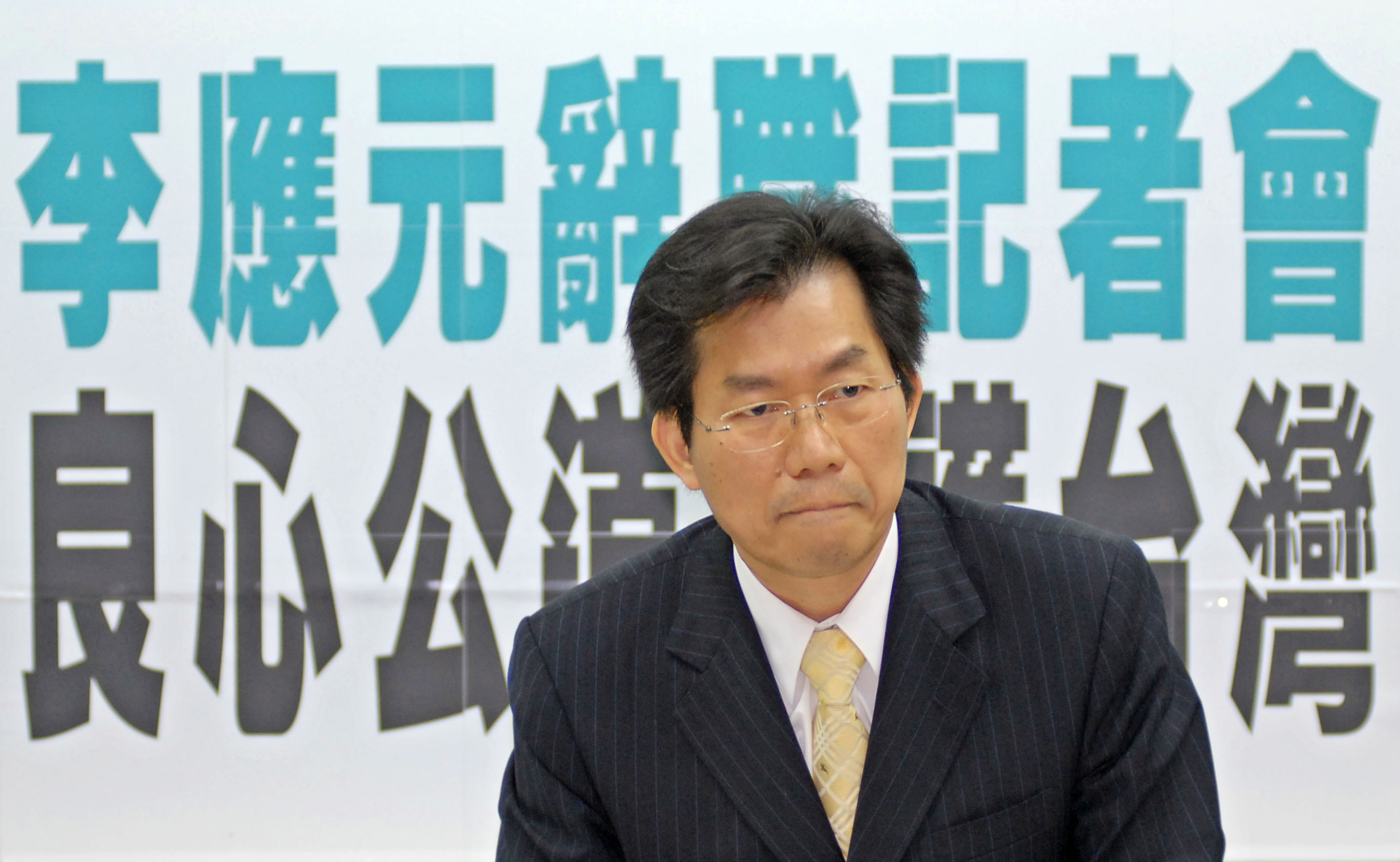 Council of Labor Affairs (勞委會) Chairman Lee Ying-yuan (李應元) resigned yesterday in a show of dissatisfaction over the Cabinet's failure to formally approve a minimum wage hike by the May 1 Labor Day as had been expected.
Lee also cited disappointment over a recent remark by Premier Su Tseng-chang (蘇貞昌), who implied that former premier and Democratic Progressive Party presidential hopeful Frank Hsieh (謝長廷) was too calculating.
Executive Yuan Deputy Secretary-General Chen Mei-ling said yesterday evening that Su wanted to keep Lee in office, however, and suggested Lee could take a leave of absence if he wanted to campaign for a candidate in the DPP primary contest.
"We hope Chairman Lee will retract his intention to resign and use other methods if he wishes to campaign," Chen stated.
Su was determined to keep Lee in the Cabinet, Chen explained, because of the CLA chairman's "outstanding ability" and his "many contributions" to labor, including securing passage of a long-delayed statute to establish a supervisory and management committee for the NT$161 billion Labor Retirement Pension Fund.
Lee, who returned to his native Yunlin County after announcing his decision to resign, expressed his appreciation for the premier's desire to keep him on, but did not say whether that would lead him to change his mind.
The CLA chairman said he resigned because the Cabinet had failed to finalize the policy to hike the basic wage by May 1, but indicated he still hoped the increase would still be implemented on July 1 as scheduled.
"The Cabinet's decision not to announce the minimum wage increase on Labor Day dashed the expectations of workers, and I have to take political responsibility," Lee said at a press conference.
He expressed regret that some labor union leaders even accused him of turning his back on his pro-workers' rights ideals because the minimum wage policy was not promoted smoothly.
The basic wage, which has not been adjusted since October 1997, is now set at NT$15,840 a month or NT$66 per hour. After receiving approval in principle for an increase last week, the "Basic Wage Review Commission" convened last Friday by the CLA proposed a boost in the basic wage of between 7.5 percent and 9.5 percent beginning July 1.
The finalized plan was not announced yesterday "because complementary measures needed to be finalized" and the Council for Economic Planning and Development had yet to submit its recommendations, spokeswoman Chen said.
"There should be no difficulty in securing implementation of the basic wage increase by July 1," she added.
Local media also reported that Cabinet officials were concerned that an increase announced now would be linked to the DPP's presidential primary and perhaps interpreted as a ploy by the premier to help him win the party's presidential nomination.
Lee, the director of Hsieh's campaign headquarters in last year's Taipei mayoral election, denied rumors that he wanted to resign to cut his ties to Su and throw his support behind Hsieh in the DPP's primary for the 2008 presidential race.
However, he cited recent a remark in the Legislature by Su implying that Hsieh was too calculating as one of the reasons why he wished to quit his CLA post to become a social activist again.
"It is difficult for me to make the decision but I can lead a simple life after resigning," Lee noted, stressing, "I cannot take the seat (the post of CLA chairman) any longer because I feel upset and do not know how to face former and incumbent premiers at the same time."
Lee said he hoped that the DPP's primary could be held fairly and Hsieh could be treated with justice for his contribution to society and the DPP.
Lee was tabbed as Cabinet secretary-general in February 2005 soon after Hsieh became premier. Hsieh then appointed him as CLA chairman in September 2005 after former CLA Chairwoman Chen Chu (陳菊) resigned to take political responsibility for a riot of Thai foreign laborers working on the Kaohsiung Rapid Transit System project.
Hsieh, meanwhile, expressed his gratitude for Lee's support and disclosed that he had already persuaded Lee from resigning his current post.
Hsieh said he would ask pro-Hsieh Cabinet members not to resign now because these members would lose their jobs and see their interests suffer if he lost the DPP primary.
Lee's resignation on Labor Day dealt a blow to the Cabinet led by Su, and doubts were growing over whether other pro-Hsieh Cabinet members would follow.
At a legislative hearing yesterday, Su was asked by KMT lawmaker Lai Shyh-bao (賴士葆) whether he was worried that Council of Agriculture Chairman Su Jia-chyuan (蘇嘉全) would be next.
Su sidestepped the question, emphasizing only that all Cabinet members worked hard in the interests of the nation's citizens and urged the public not to speculate on the motives behind Lee's resignation.