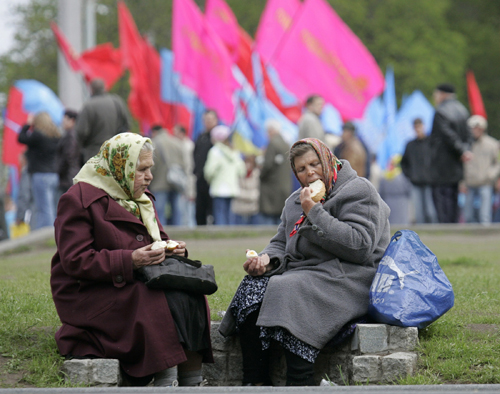 Violent clashes marred massive May Day rallies around the world yesterday, with riot police firing warning shots to disperse protesters in Istanbul and Macau, while hundreds were taken into custody.
The traditional day of workers' solidarity was marked with widely varying turnouts, from several hundred Iranians who took to the streets of Tehran to demand better working conditions, to 100,000 Italian union activists who marched in Turin.
Much of the global political focus was on whether Cuba's ailing leader Fidel Castro would make his first public appearance at May Day events since he underwent major surgery nine months ago.
And there was an historic rally in South Korea, when workers from the two Koreas held the first joint May Day celebrations to call for the reunification of their divided homeland.
In Istanbul, police fired shots in the air and used tear gas and water cannon as they fought pitched battles yesterday with left-wing demonstrators intent on holding a banned rally in one of the city's central squares.
Istanbul Governor Muammer Guler said more than 580 people had been detained, including members of "illegal organizations."
Authorities had banned marchers from accessing Taksim Square to mark the 30th anniversary there of "Bloody May Day" - when 34 people died after unknown gunmen fired on a peaceful crowd triggering mass panic.
In rare scenes of civil unrest in the southern Chinese enclave of Macau, police also fired warning shots with what were thought to be starter pistols after a crowd of more than 1,000 broke through police cordons lining a May Day march route.
The protest had started peacefully with demonstrators calling for a reduction in the number of illegal workers flooding into the enclave.
But the mood soured and witnesses said they saw police dragging several protesters from the crowd by their hair.
In Manila, riot police fanned out as 5,000 people waving red banners with the communist gold hammer and sickle were blocked from marching on the palace of Philippine President Gloria Arroyo.
They faced off with police for more than an hour before moving away, waving red flags and demanding Arroyo's resignation.
In Thailand, about 10,000 workers marched through the center of the capital, Bangkok, railing against the military-backed government which took power after a coup last September and demanding an immediate return to democracy.
Tens of thousands of people across Russia called for higher salaries and pensions in demonstrations that for the most part carefully avoided criticism of the Kremlin.
Russian state television showed crowds gathering in cities from Vladivostok to Moscow with demonstrators, mostly organized by the trade unions, Communist Party, and pro-Kremlin parties, waving multi-colored balloons and blue or red flags.
Precious little was said in the Chinese media about Labor Day, apart from an editorial in the People's Daily hailing the egalitarian principles on which communist China was built.