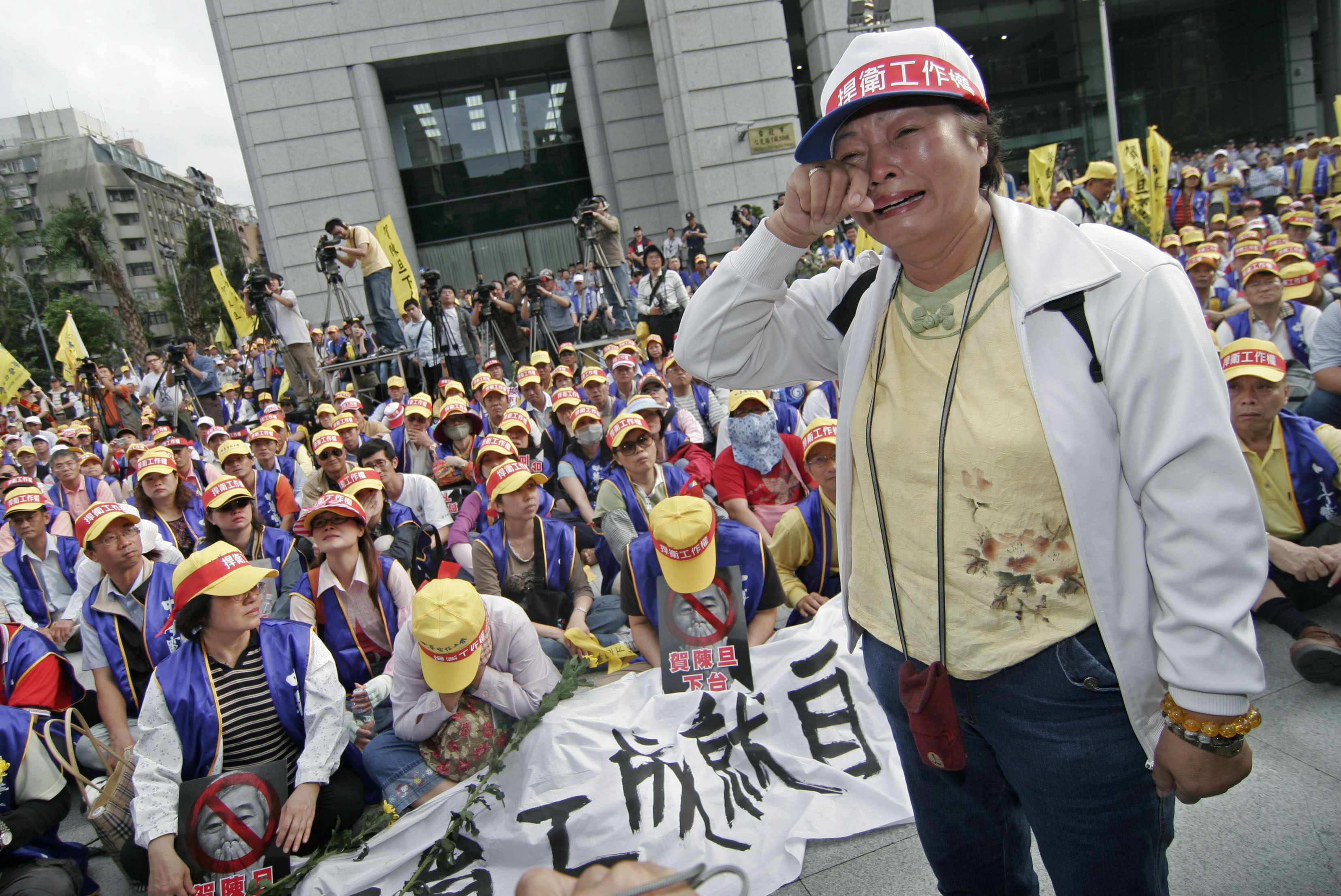 At least 3,000 Chunghwa Telecom Workers' Union members took to the streets yesterday on International Workers' Day to demand Chunghwa Telecom Co., Ltd. Chairman Hochen Tan to step down, saying that what Hochen has pushed for in the company violated their working rights.
Holding banners that read, "Hochen Tan get lost," and "Hochen Tan, killer of working people's rights," protesters gathered at Taipei Main Station yesterday afternoon and marched in downtown Taipei, making its first stop in front of the Executive Yuan. The march made its final stop in front of the building of the Ministry of Transportation and Communications on Ren Ai Road in Taipei City, and staged a rally at the compound.
The police estimated the number of the protesters at around 3,000, but union members told Taiwan News that more than 5,000 people took part in the rally. Participants of the rally came from all over the island; unlike other rallies which protesters take tour buses to Taipei, many of them took the rail service to participate the march. Some of them carried chrysanthemums in their hands to express their dissatisfaction toward the chairman of the company.
"Laborers in Taiwan are treated as dregs. The reason that so many of us gathered here today is to say that we cannot stand the unreasonable demands from the company any more," said chairman of CTWU Chang Hsu-chung.
Chang said since Hochen took the post as chairman of the company two years ago, he has been pushing for many policies that aim to force employees to quit in order to cut down the costs of maintaining personnel.
Chunghwa Telecom has been going through the transformation from a state-run enterprise to a privately owned company in recent years.
According to Chang, policies include asking employees to work across the city or county from where they originally worked at, and demanding employees to boost sales records. Those who say no to job relocations or fail to meet the sales standard would face salary cuts or be laid off, Chang said.
"We are not asking for salary raises or bonuses. Our humble request is to keep our jobs," Chang said agitatedly.
The union said in a statement released to reporters that over 3,000 workers have been forced to leave their posts within less than two years. The statement explained that the reason that so many people lost their jobs was because Hochen has to fulfill its promise he made to foreign investors, who currently hold nearly 48 percent of stock shares of the Chunghwa Telecom, that 5,000 employees would be laid off within three years to lower personnel costs.
"The company made the adjustment on the job content without even negotiating with its employees first," the statement said.
It cited a survey conducted by the CTWU that 93 percent of the respondents think Hochen is no longer fit to be the head of the company.
The statement said that the appeals of the march are to call for the government to replace Hochen immediately, and to demand that Chunghwa Telecom begin negotiations with union members.
During the rally, protesters took a minute to mourn the loss of a Chunghwa Telecom employee who committed suicide last September, due to mounting pressure from his performance record. The man killed himself in the machine factory where he worked, leaving behind his elderly parents, his wife and young children.
The rally ended peacefully without conflict with the police at around six o'clock yesterday.
Vice Minister of the MOTC Ho Nuan-hsuen received the union plea letter on behalf of the MOTC. Ho promised that the MOTC will deal with the illegalities of the issue, and that the MOTC will assist in restoring negotiations between the union and the company within two weeks.
Wu Chih-feng, a 47-year-old Chunghwa Telecom employee who has worked for the company in Changhua in central Taiwan for 30 years, told Taiwan News during an interview that worry constantly weighs down on his heart, and that he does not see his future.
"Most of the Chunghwa Telecom employees are in their middle or senior ages. How are we supposed to find ourselves jobs if we lose the current one?" he asked.
He said he understands that privatization of the company takes a lot of effort, and employees have to go through a great deal of adjustments over job content, but unreasonable requests are making working at the company unbearable.
"Besides doing our own jobs, every employee has been asked to sell mobile phones, mobile numbers, and online services to users of Chunghwa Telecom in order to boost sales for the company. If we sell 20 mobile phones this year, next year we will be asked to sell 40 phones. The unlimited and unceasing request is hard to bear," Wu said.