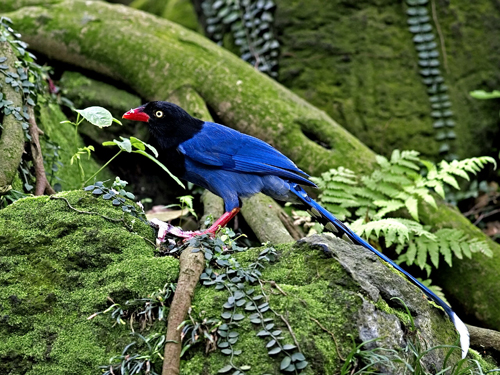 The Formosan blue magpie and the mikado pheasant have been short listed as finalists in the quest to anoint a national Taiwanese bird following the conclusion of a four-month-long online referendum, organizers announced yesterday.
A total of 1.1 million votes were cast between January 1 and April 29 in the "Vote for Taiwan's National Bird" referendum, jointly organized by the Taiwan Sustainable Ecology Society, the Taiwan International Birding Association, Democratic Progressive Party Legislators Tien Chiu-chin and Chen Hsien-chung, and independent Legislator Yang Chung-tse.
The Formosan blue magpie and the mikado pheasant won 520,000 votes and 280,000 votes, respectively, defeating the other two candidates, the yellow tit and the swinhoe's pheasant, according to the organizers.
They said a signature campaign will begin in the Legislative Yuan today to promote a final decision by legislators.
Tien said she and the other organizers came up with the idea of holding a referendum after seeing that many countries have their own national birds, such as the United States' bald eagle and France's cockerel.
Using the image of its national bird, Taiwan will be able to highlight its unique features and achievements in wildlife conservation, Tien said.
Both the Formosan blue magpie and the mikado pheasant are endemic to Taiwan.
Formosan blue magpies, known locally as long-tailed mountain ladies, are ferocious birds that often live together in small groups and have been known to occasionally attack other flocks of birds. They are often seen in broad-leaved and secondary forests at low and mid-level altitudes up to 1,800 meters above sea level.
Mikado pheasants, also called the "king of the mist, " live in mountainous regions at altitudes of 2,000 to 3,200 meters above sea level. Solitary, quiet and alert, mikado pheasants often walk and forage for food on rainy and foggy days. An image of the bird appears on Taiwan's NT$1,000 note.