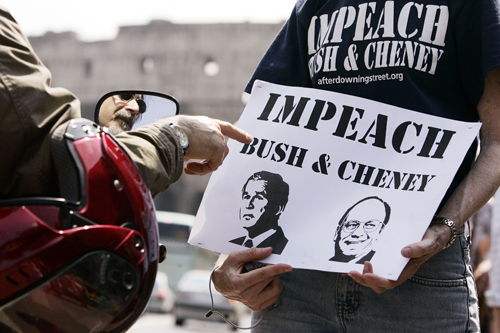 The bitter fight over the latest Iraq spending bill has all but obscured a sobering fact: The war will soon cost more than US$500 billion.
That's about ten times more than the Bush administration anticipated before the war started four years ago, and no one can predict how high the tab will go. The US$124 billion spending bill that President Bush plans to veto this week includes about US$78 billion for Iraq, with the rest earmarked for the war in Afghanistan, veterans' health care and other government programs.
Congressional Democrats and Bush agree that they cannot let their dispute over a withdrawal timetable block the latest cash installment for Iraq. Once that political fight is resolved, Congress can focus on the president's request for US$116 billion more for the war in the fiscal year that starts on September 1.
The combined spending requests would push the total for Iraq to US$564 billion, according to the nonpartisan Congressional Research Service.
What could that kind of money buy?
A college education - tuition, fees, room and board at a public university - for about half of the nation's 17 million high-school-age teenagers.
Pre-school for every 3- and 4-year-old in the country for the next eight years.
A year's stay in an assisted-living facility for about half of the 35 million Americans age 65 or older.
Not surprisingly, opinions about the cost of the war track opinions about the war itself.
"If it's really vital, then whatever it costs, we should pay it. If it isn't, whatever we pay is too much," said Robert Hormats, author of "The Price of Liberty," a newly published book that examines the financing of America's wars.
Before the war, administration officials confidently predicted that the conflict would cost about US$50 billion. White House economic adviser Lawrence Lindsey lost his job after he offered a US$200 billion estimate - a prediction that drew scorn from his administration colleagues.
"They had no concept of what they were getting into in terms of lives or cost," said Winslow Wheeler, who monitors defense spending for the Center for Defense Information, a nonpartisan research institute.
Bush and his economic advisers defend the growing cost as the price of national security.
"It's worth it," Bush said last May, when the tab was in the US$320 billion range. "I wouldn't have spent it if it wasn't worth it."
For war opponents, the escalating cost is a growing source of irritation. A Web site showing a running tally of the war's cost, http://costofwar.com/index.html, attracts about 250,000 visitors a month, according to the National Priorities Project, the site's sponsor.
"It comes down to the question, how do you want to spend a half trillion dollars? Do you want to spend a half trillion dollars on this or would you rather spend it on something else?" said economist Anita Dancs, the organization's research director. "It's all a matter of costs and benefits."
As wars go, Iraq is cheap. World War II cost more than US$5 trillion in today's dollars. Korea and Vietnam each cost about US$650 billion in today's dollars, but spending on those wars took a much bigger share of the economy when they were fought.
"For the average American, there's really been no economic consequence of the country being involved in a war," said Hormats, vice chairman of Goldman Sachs (International). "It doesn't have as much impact on the economy as those previous wars did."
But the painless approach to financing the Iraq war could cause problems in the future. Hormats worries that the decision to cut taxes and increase domestic spending while fighting wars in Iraq and Afghanistan will complicate efforts to deal with the financial strains that threaten to bankrupt Social Security and Medicare.
Calling for sacrifice now, in a time of war, would give Americans more of a psychological stake in the long war on terrorism and prepare them for the sacrifices that will be needed to shore up Social Security and Medicare, he said.
"When you go into a war, you have to figure out how you're going to pay for it and be candid with Americans about it," Hormats said. "You can't have business as usual."