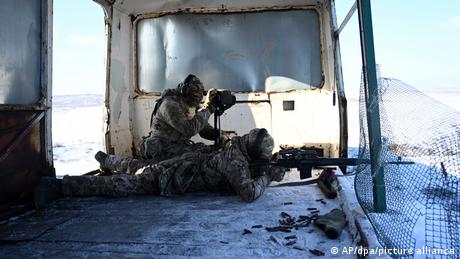 US President Joe Biden's administration believes Moscow is planning a "false flag" operation in eastern Ukraine to justify an invasion, a US official told news agencies on Friday.

The official, who spoke on condition of anonymity, said Russian operatives were already in position and that Moscow started conducting a social media disinformation campaign.

The aim, according to the official, is to frame Kyiv as the aggressor to justify a Russian invasion of Ukraine.

The official told Reuters news agency that such an invasion could result in "widespread human rights violations and war crimes."

No solution in sight

Some 100,000 Russian soldiers have amassed near Ukraine's eastern border, a region where pro-Russian separatists have been fighting the central government since 2014 when Moscow annexed Ukraine's Crimean peninsula.

Tensions were further stoked on Friday after several Ukrainian government websites were hacked.

"We are in touch with the Ukrainians and have offered our support as Ukraine investigates the impact and nature and recovers from the incidents. We don't have an attribution at this time," a White House Security Council spokesperson said.

Attempts to mitigate the tensions through direct dialogue between Western and Russian diplomats this week were unsuccessful.

Following the cyber-attack against the Ukrainian ministries, Austrian Foreign Minister Alexander Schallenberg expressed concern that this may be a sign of things to come.

Schallenberg said the standoff with Russia "is serious, more serious than anything we've seen in recent years."

"Some say the cyberattack could be the prelude for other activities, military activities," he said.

Germany's Defense Minister Christine Lambrecht on Friday warned Moscow of consequences should it invade Ukraine, but stressed that: "We must exhaust all options to resolve this conflict."

The German Foreign Minister Annalena Baerbock is also planning on visiting both Kyiv and Moscow for talks.

DW's Chief International Affairs Editor Richard Walker said it will be difficult to find a solution in light of the Kremlin's demands over Ukraine.

"For Vladimir Putin to make these demands public and then to walk back from them without losing face, is going to be difficult. That's going to be the art of diplomacy in the weeks ahead for the West, to try and persuade him to do exactly that," Walker said.