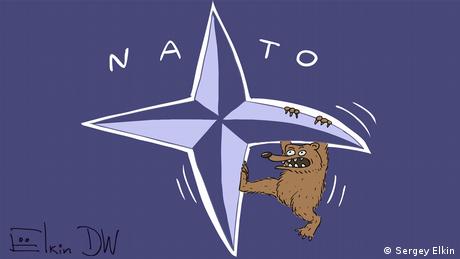 The security guarantees demanded by Moscow from NATO are completely unacceptable. Russian President Vladimir Putin is using the draft US-Russian security agreement presented in December to blackmail NATO over the possible accession of Ukraine and Georgia, just as he is trying to blackmail the alliance over stationing troops in Poland and Hungary.

NATO cannot let Putin dictate whom it will admit and where it will station its units on NATO territory. And it was foreseeable that Putin would not back down from the threat posed by the more than 100,000 Russian troops amassed on the border with Ukraine.

On the contrary, after the Organization for Security and Co-operation in Europe (OSCE) Council meeting, Russian Deputy Foreign Minister Sergei Ryabkov not only confirmed the inconclusive nature of the talks, but also added fuel to the fire: He said he saw no reason for further talks and would not rule out the possibility of stationing Russian forces in Cuba and Venezuela.

Important lessons for the West

Despite the lack of any real progress, there are important takeaways for the West on how it has conducted itself vis-à-vis Russia.

US President Joe Biden and his administration were right not to shy away from bilateral talks with Moscow, notwithstanding the fact that China is the main focus of US foreign policy.

For Putin, and his neurosis to put Russia back on the global power map, it was crucial to be able to boast that Moscow and Washington were talking as equal players. Beijing will have taken note.

It was important that US Deputy Secretary of State Wendy Sherman paved the way for prospective talks on arms control, confidence-building measures, and ways to reduce the risk of conflict — including the deployment of short- and medium-range missiles in Europe. The Russian response will be an indicator of how serious Moscow is about diplomatic solutions and military disarmament.

The dual track approach of deterrence and diplomatic willingness to talk about common interests in disarmament, as laid down in NATO's 1967 Harmel Report [named after the then Belgian Foreign Minister Pierre Harmel — the ed.], remains the only sensible and politically viable strategy in dealing with Russia.

However, NATO, and especially the EU, have criminally neglected the deterrence component. The economic sanctions imposed so far in response to the annexation of the Crimean Peninsula in 2014 have been far too meager. These measures must remain on the table and, if necessary, be used to hurt Putin and his kleptocratic system.

Western deference to the Putin regime has not had the desired effect. At the NATO summit in Bucharest in 2008, the alliance opened the door for Ukraine to become a member only to stop short of granting membership action plans. The rigid adherence to Nord Stream 2, or the harmless economic sanctions to date have proven to be equally pointless.

Too little from the EU

The EU is currently playing second fiddle to the US when it comes to dealing with Russia. It is neither willing nor able to guarantee security in its own eastern European backyard. As a result, NATO — written off in the past as a paper tiger — is experiencing an unexpected renaissance.

Putin wants nothing short of overturning the entire post-Cold War European security architecture and rearranging it along former Soviet spheres of influence. This can only be done by force and the specter of a war in Europe continues to loom. "There is a real risk of a new armed conflict in Europe," NATO Secretary General Jens Stoltenberg stated unequivocally after the NATO-Russia Council meeting. The German government needs to be very aware of that danger.

The West must remain prudent

Will Russia invade Ukraine again? The threat remains very tangible. The West has remained unflinching and prudent in its solidarity in the current standoff with Russia. It must continue to do so. Uncoordinated German foreign and energy policy measures will not impress Putin, let alone stop him.

Dr. jur. Jörg Himmelreich is an affiliate professor at the ESCP Business School (ESCP) in Paris and Berlin.

This piece has been translated from the original German.