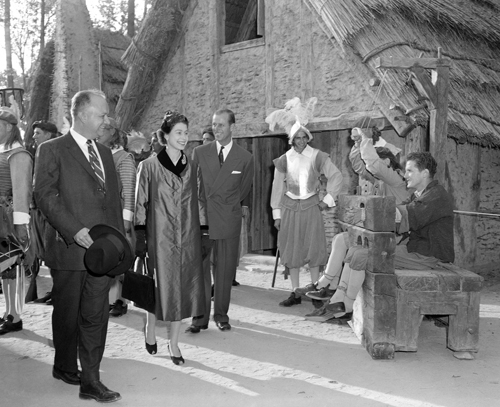 Queen Elizabeth II heads to the U.S. for the first time in 16 years tomorrow to mark the 400th anniversary of the first permanent English settlement in North America at Jamestown, Virginia.
The 81-year-old monarch's trip is her fourth state visit there. Her first visit in 1957 saw her attend the 350th anniversary celebrations at Jamestown.
"The theme of the visit is the historic links and bonds of friendship between the U.K. and the United States," said a royal official, speaking on customary condition of anonymity.
It will mark the shared history and heritage as well as future partnerships in science, education and innovation, she added during a pre-trip briefing at the queen's official London residence, Buckingham Palace.
Although Jamestown is the focus for the busy six-day trip, the queen will also fulfill a lifelong ambition to watch the Kentucky Derby, the first of the U.S. Triple Crown racing events that takes place in Louisville on May 5.
The queen is a lifelong racing fan and still a keen horsewoman, despite her advancing years. She and her husband, Prince Philip, 85, are regular fixtures at the annual Epsom Derby and Royal Ascot flat racing events in Britain.
Tomorrow she will be in Richmond, Virginia, to address the Virginia General Assembly legislature. Previous speakers there include former British prime ministers Winston Churchill in 1946 and Margaret Thatcher in 1995.
The following day's visit to Jamestown, which was settled by 104 English colonists in 1607, 13 years before the more famous Pilgrim Fathers, will see her tour the site that attracts more than 19 million visitors each year.
From there she will visit William and Mary College in Williamsburg, which was founded by England's king William III and queen Mary II in 1693 and is the second-oldest higher education institution in the United States. While the Queen visits the college, former naval officer Prince Philip will meet Pacific campaign veterans at the National Maritime center in Norfolk on board the USS Wisconsin, which, like him, was at Tokyo Bay for the Japanese surrender in 1945.
After their day at the races on Saturday, the couple fly to Washington on Sunday and meet U.S. President George W. Bush and wife Laura at the White House on Monday. Their visit ends Tuesday.