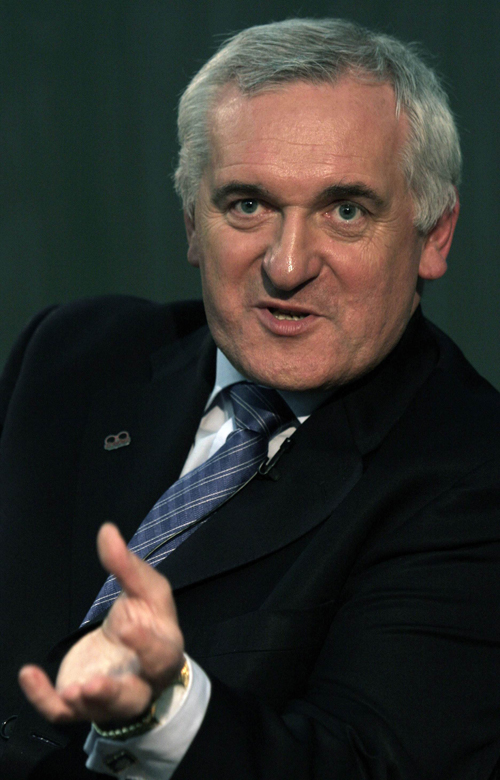 Irish Prime Minister Bertie Ahern pledged to cut taxes and improve public services as he launched his campaign for a third consecutive election victory under a cloud of fresh allegations in a payments scandal.
Ahern, in power since 1997, said Ireland's enviable economic growth and prosperity could not be taken for granted and further reform would be necessary.
"There is no such thing as a patent on success," Ahern said at a Reuters Newsmaker event, his first major public appearance since he set May 24 as the date for general elections on Sunday.
"We have achieved an incredible amount in a short time, but to make sure we are a success not just today but also in the years ahead, we have to take the next steps forward."
Ahern faces a tough campaign as Ireland's flourishing economy begins to slow. Voters are also impatient with the pace of progress in improving education, health and transport.
Opinion polls show Ahern's Fianna Fail party and coalition partner, the pro-business Progressive Democrats, neck-and-neck with the opposition Fine Gael and left-leaning Labor Party.
Ahern's campaign launch coincided with new revelations in a payments scandal that prompted calls for him to quit last year.
The Irish Times reported on Monday that businessman Michael Wall gave US$59,830 in December 1994 to Ahern's then partner Celia Larkin to fund work on a house owned by Wall but rented by Ahern and bought by him three years later.
Ahern was deputy prime minister at the time.
The newspaper said the information was revealed in submissions to a tribunal investigating corrupt planning practices in the 1980s and 1990s.
Ahern told reporters that the Larkin transaction was appropriate and he repeated denials of wrongdoing.
He apologized in October for accepting money from friends and businessmen in 1993 and 1994, while finance minister, following separation from his wife. His apology appeased coalition partners and headed off the calls for his resignation.
"These things you just have to deal with," he said on Monday. "From my point of view it would have been better if we could have dealt with all these things a few years ago."
In a speech on the economy at University College Dublin's business school, the prime minister said he would cut income tax further, reduce national debt and oppose harmonization of corporation tax across the European Union.
Ireland's low rate of corporation tax has been a key element of its economic success in recent years.
Rapid immigration has also helped drive growth. Immigrants now account for 10 percent of the population, up from about one percent a decade ago.