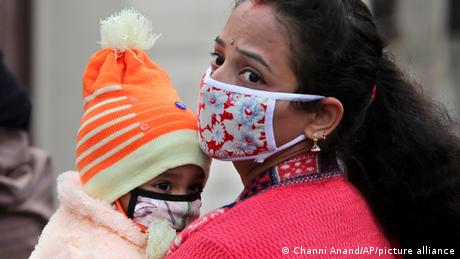 Priti, 5, who resides in Jaipur city, had a fever for four days earlier this month but her parents didn't take her to a hospital. Instead, they decided to treat her at home with paracetamol and sponge baths.

But her condition persisted, resulting in diarrhea and respiratory problems. She was then administered a COVID test and the result was positive.

Likewise, 9-year-old Jagat, who suffers from a neuromuscular disorder, was admitted to a hospital in Delhi last week and kept under observation for a few days after he too tested COVID positive and exhibited symptoms of cough, cold and fever.

There is no centralized public data on how many children have needed hospital care due to coronavirus infection in India, but authorities in some other countries such as the US and the UK have recorded a rise in hospitalization in children due to the fast-spreading omicron variant.

Doctors in various metropolitan cities in the South Asian country report an increasing number of COVID infections among children, with many of those infected by the virus showing symptoms such as fever, cough, chills, diarrhea and respiratory problems.

Children with comorbidities and physical ailments, in particular, are at risk of hospitalization.

According to officials at the Indian Academy of Pediatrics (IAP), as many as 31 children aged under 15 have been hospitalized in Delhi alone over the past two weeks.

"Children's respiratory tract is smaller than that of adults and this new variant is primarily an upper tract infection, and it is likely to affect more children as the virus spreads. We have to wait and watch," Animesh Arya, a top pulmonologist told DW.

Shally Awasthi, a pediatric pulmonologist at Lucknow's King George's Medical University, pointed out that there is growing concern among parents.

"The worrisome trend of children contracting COVID has been increasing in many places. Children's innate immune system has been exposed to this virus, and they could be losing the advantage," the doctor told DW.

"The virus also seems to be evolving in ways that could thwart innate protection," Awasthi added.

Doctors note that children are vulnerable as it is difficult for them to maintain physical distance and wear masks for long.

"For the past week, I have been seeing children who are COVID positive and suffering from a high fever, diarrhea and breathing problems. Some have complained of a pain in the throat and vomiting. Luckily, they haven't needed hospitalization so far," Promila Bhutani, pediatrician and child specialist, told DW.

Over the past few days, India has been witnessing a surge in coronavirus cases, fueled mostly by the highly transmissible omicron variant, but hospitalizations are low, with most people recovering at home.

The Health Ministry said on Monday that only 5% to 10% of all those people infected have been hospitalized, compared with 20% to 23% during the previous delta variant-fueled wave.

The country reported 264,202 new cases of the coronavirus in the last 24 hours, taking its total tally to 36.58 million, the federal Health Ministry said on Friday.

They found that almost half of them developed multisystem inflammatory syndrome (MIS-C), a condition where different body parts can become inflamed, including the heart, lungs, kidneys, brain, skin, eyes, or gastrointestinal organs.

According to the IAP, there has been no scientific work done in India to estimate the fraction of pediatric COVID-19 cases that led to MIS-C.

"There are some hospitalizations but not too many. More important than hospitalization is the use of oxygen or ventilators among the affected children," Sumit Ray, renowned critical care specialist and medical superintendent of the Holy Family Hospital in Delhi, told DW.

"I understand there have been cases in other hospitals too where children with comorbidities like leukaemia, thalassemia or neuromuscular disorders have been admitted," said Ray.

A report published by the National Institute of Disaster Management (NIDM) in August 2021 recommended an expansion of existing health facilities for children in the country.

"The existing pediatric health care facilities are not robust enough to treat children on a large scale. The existing COVID facilities should be augmented and the number of beds available should be enhanced by at least 10%," said the NIDM report.

Authorities in many states have reserved over double the COVID-19 hospital beds for children than recommended by experts out of fear of being underprepared.

India currently has more than 24,000 pediatric ICU beds, compared with a recommendation of fewer than 10,000 beds from a federal taskforce, according to government data.

"States are scared and prepared because kids below 15 years have not been vaccinated. I support the decision of states to have more beds ready than recommended," Raj Kamal Choudhary, associate professor of medicine at the Jawaharlal Nehru Medical College and Hospital in the eastern state of Bihar, told Reuters news agency.

Furthermore, India has some 139,000 COVID-19 ICU beds in total, compared with 195,390 recommended. Oxygen-supported beds, which ran short during the second wave last year, have increased to nearly 495,000, still lower than over 519,000 suggested by experts.

Basic isolation beds, however, are a plenty at more than 1 million.