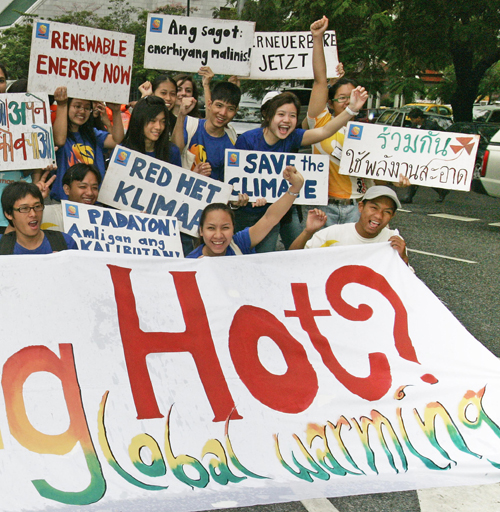 The European Union called on developing countries yesterday to take action to reduce greenhouse gases, as delegates worked to finalize a report detailing measures needed to save the planet.
The draft report from the Intergovernmental Panel on Climate Change being debated in Bangkok says the world must quickly embrace energy efficiency and shift away from fossil fuels to help keep the temperature rise to 2 degrees Celsius.
But the United States and China are expected to attempt to insert language playing down the conclusion that quick action can limit the catastrophic effects of global warming, according to comments each submitted ahead of the meeting. The two countries also have raised doubts that immediate moves could stabilize greenhouse gas levels.
Two previous IPCC reports this year painted a dire picture of a future in which unabated greenhouse gas emissions could drive global temperatures up as much as 6 degrees Celsius by 2100. Even a 2 degree C rise could subject up to 2 billion people to water shortages by 2050, and threaten extinction for 20 percent to 30 percent of the world's species, the IPCC said.
Tom van Ierland, a climate change expert with the European Union, said it supports a goal of limiting temperature changes to 2 degrees C but that it couldn't be done without the cooperation of developing countries.
He said the EU is providing tens of millions of dollars in funding for energy efficiency projects in developing countries and supports policies "they themselves can implement to increase their energy efficiency and energy security."
"We need to ensure that in coming years the growth of emissions in developing countries is reduced and eventually capped to be in line with our 2 degree objective," he told reporters.
Without singling out any one country, van Ierland also called on governments to stop using the inaction of some of the world's biggest polluters as a reason for failing to launch their own policies to cut greenhouse gases.
China, the world's second biggest emitter, has said richer countries are responsible for the accumulated greenhouse emissions and should take the lead in cleaning up the problem.
The United States and Australia have refused to sign the Kyoto Protocol, a United Nations treaty on climate change, partly over objections that China and India are not held to carbon pollution reduction targets.
"We hope that kind of discussion can subside because we don't think it's the right one," van Ierland said of the waiting game.
"Some countries do use this rhetoric," he said. "It's a bit sad because there are things to do which shouldn't depend on climate change."