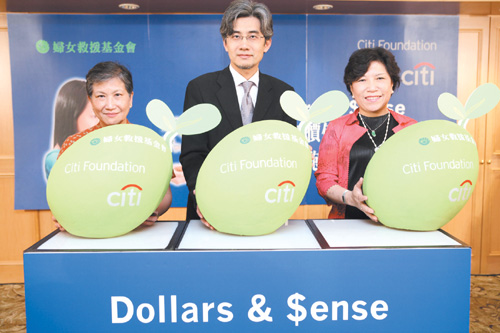 Some 84 percent of teenagers who participated in a poll on financial responsibility said they had to be held accountable for their own actions, with 90 percent of the respondents saying they understood the consequences resulting from poor credit, a bank promoting a "Dollars and Sense" campaign said in its latest report.
The survey, conducted by Nielsen Consulting Firm and commissioned by Citibank and the Taipei Women's Rescue Foundation, also showed that more than 70 percent of those teenagers who took part in the poll believed that "more happiness would come following (financial) planning and waiting."
"They thought it was worth it to think more and wait a while before making a decision. They agreed they could be happier if they plan their spending," the study showed.
"But 45 percent of teenagers surveyed (said they) would make purchases without thinking." More girls (53 percent) exhibited this buying behavior compared with boys (34 percent).
Overall, 54 percent of the respondents said they have been saving since childhood, the study said.
The survey targeted high school and vocational high school students in the major four areas of Taiwan between September 18, 2006 and January 19, 2007. According to Citibank, 1,742 samples before the school sessions and another 1,742 after the school sessions were taken, with a 90.6 percent recall rate.
The study's aim was to understand kids' behavior and attitude from making friends online and the sources of their self-recognition to financial knowledge and their expectations in the future, the bank added.
The survey also found that some 93 percent of the respondents go online, with 52 percent of them saying that they make friends on the Internet. In terms of privacy and safety attitudes, some 70 percent choose to "partially withhold" their personal information, but 28 percent said they choose to "honestly answer" personal information and thoughts.
Girls (63 percent) were more cautious than boys (46 percent) when it came to making friends online. More boys withheld personal details since they wanted "to have a little more sense of mystery (13 percent)" and "to make themselves perfect in the virtual world (six percent)" than girls.
Some 86 percent of those kids said they worry that their personal information would be released. Girls (72 percent) worried about "being harassed on the Internet" more than boys (36 percent), poll results showed.
Something worth noting is that 48 percent of teenagers worried they could not tell whether their friends on the Internet were telling the truth.
Regarding self-recognition and their future expectations, most of the respondents said "being popular and recognized by peer groups" remained their key source of personal recognition.
Eighty-three percent of those polled said they planned on going to college. Nearly 10 percent however said they did not know what to do after finishing school.
The more education that the parents have, the greater the desire of those teenagers to pursue a college education. More high schools students (91 percent) said they would go to college compared with vocational high school students (75 percent).
The poll also showed some encouraging results as far as the long-term impact of financial education on those kids' lives was concerned.
Survey results showed that the percentage of students with sound financial education rose 41 percent after Citibank introduced its "Dollars and Sense" program in schools.
On the effectiveness of those lessons, the effect was most substantial when it came to learning of "opportunity cost," "single and compound interest," "the revolving interest for credit cards" and "impact of poor credit," the bank said.
There is however still a lot of room for improvement when it comes to promoting the relationship between "the quality of credit against the level of interest rates," Citibank said.
To help students strengthen their set of values and develop the right attitude on their finances, Citibank and the Taipei Women's Rescue Foundation suggested that those teenagers be encouraged to use the Internet wisely and pay attention to their safety when making friends online.
Since peer groups are the main source of self-recognition for teenagers, Citibank and the TWRF suggested that parents pay more attention to their kids' friends.
"In addition, although most teenagers agreed planning and waiting could bring more happiness, they still bought things without careful thought. We suggest that parents remind their kids (about basic financial concepts) and (the importance of carefully spending their money) in their everyday lives," the two organizations said.