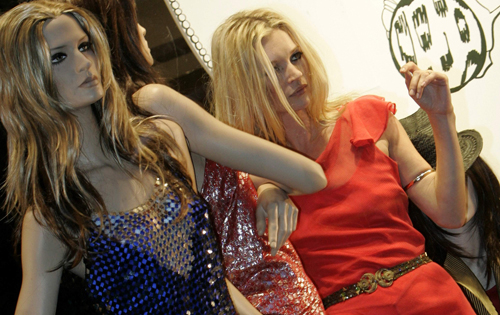 Hundreds of Kate Moss fans queued on Monday for an early taste of the British supermodel's first foray into fashion design at the launch of her eagerly awaited new range.
The 33-year-old, who has inspired fashion trends from skinny jeans to sawn-off shorts, was at retailer Topshop's central London flagship store wearing one of her new creations - a long red dress costing 195 pounds (US$390).
She was chaperoned around a small area of the store dedicated to her collection by Topshop owner and billionaire Philip Green, who is paying Moss three million pounds to put some celebrity panache into his business.
The range, consisting of about 50 pieces including tight jeans, waistcoats and hotpants, went on sale at one store late on Monday ahead of the nationwide opening on Tuesday.
During the next two weeks, the collection will launch in another 21 countries, including at upmarket U.S. store Barney's.
Green was cautious about prospects for the range.
"Let's see how it looks and get a couple of days under our belt," he told Reuters, as dozens of shoppers busily hunted for bargains behind him.
Keen to avoid chaotic scenes that have marred other retail launches, the queue of mainly teenaged girls and young women was allowed in only in small groups, given 20 minutes in the shop and limited to five items.
Initial reaction from the shoppers was mixed.
"I didn't think it was all that good," said Cindy Wirk, who was among the first to get to the tills. "The dresses were a bit mini and I've seen them everywhere else. I didn't think her shoe collection was very good."
Overall she said she was a "satisfied customer," although she and several others noticed that a leather jacket that featured prominently in pre-launch publicity was not on sale.
Melodie Parker, another buyer near the front of the line, called it "disposable fashion," while Mary Durmond, a 26-year-old from France who queued for eight hours, praised Moss for "always dressing in the right thing."
Mother-of-one Moss wore heavy black eye makeup and her hair long and blonde for the launch. She posed with mannequins in the store window for cameras outside, but did not speak to reporters allowed inside.
Not everyone is convinced by the clothes she has put her name to, however. Some question what input Moss actually had in designing the clothes.
"The line she's delivered for the British chain Topshop ... looks like Kate copying a lot of other people's stuff Kate's worn before," wrote Maureen Callahan in the New York Post in an article entitled "Duplikate."