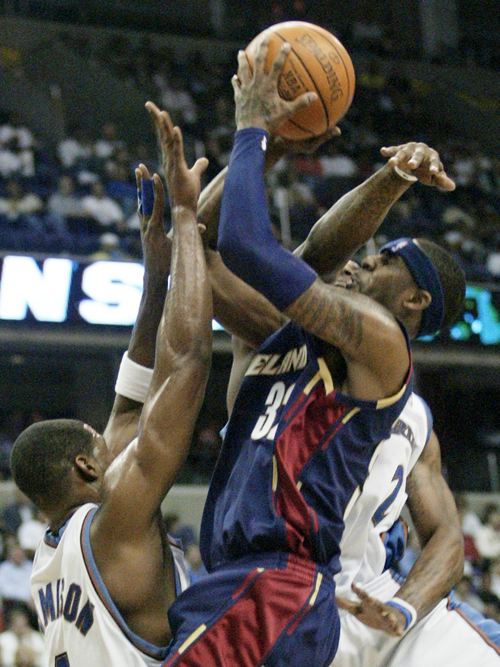 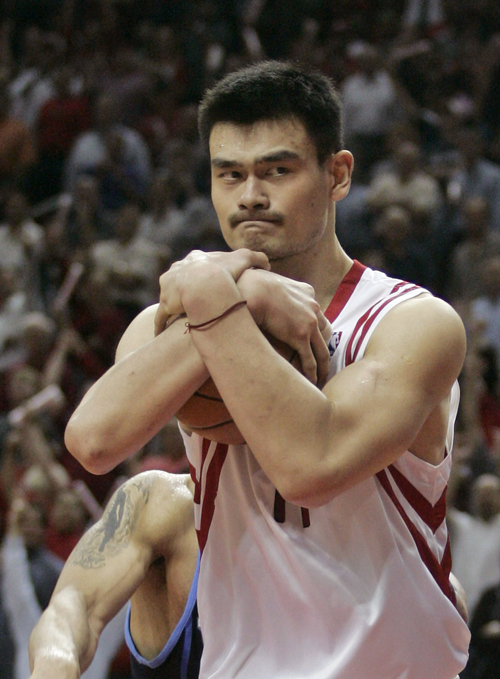 When the Cleveland Cavaliers closed out the Washington Wizards a year ago, it was all about the moment. When they did the same Monday night, it was all about the mission.
Instead of extreme jubilation with players piling on each other at center court, the Cavs' 97-90 Game 4 victory came with handshakes and pats on the back. It might not have been as easy as the Cavs had hoped, but it was just as short. The win completed the first 4-0 series sweep in franchise history, advancing the Cavs to the Eastern Conference semifinals for the second consecutive season. They will await the winner of the New Jersey Nets-Toronto Raptors series.
The details of Game 4 read much like the way the rest of the series proceeded. LeBron James delivered a masterful all-around performance and got plenty of help from his teammates.
In the Game 3 victory Saturday, James didn't score a basket in the fourth quarter but still controlled the game with his precision passing and ability to set up his teammates. The last of his 31 points came with six minutes to go Monday, but he again used the talent of his teammates to guide the Cavs to another poise-soaked win.
"At the end of the game, I'm going to get double- and triple-teamed," said James, who also had 11 rebounds and seven assists. "I've always said that I don't have to win a game by scoring."
James' long-standing and oft-criticized stance on end-of-game play and politics paid off handsomely in the victory over the Wizards.
Consider:
James finished the series averaging 27.8 points, which was his season average, but he beat his season averages in rebounding (8.5 per game) and assists (7.5). He also shot 82 percent from the line, including going 14-of-17 in Game 4 as he was able to shake off some early shooting problems by driving to the basket and drawing contact.
Zydrunas Ilgauskas made two big hoops off James' passes in the game's final minute, both when his man left him to attend to No. 23, to finish off a masterpiece game in a banner series. The Wizards simply didn't have a man to defend or block Ilgauskas out straight up and paid when they left him to help on James. Ilgauskas put up 20 points and 19 rebounds in the victory, finishing the series averaging 19 points and 11 rebounds on 60 percent shooting.
Larry Hughes scored 10 of his 19 points in the fourth quarter of Game 4, punishing his former team with a series of pull-up jumpers and free throws. He finished the series averaging 19 points and 6.9 rebounds.
Drew Gooden carried the Cavs when they were struggling offensively in Game 2, leading a charge by hitting five consecutive shots. He carried them again during a dry spell in the first half of Game 4 on his way to 14 points and eight rebounds. He averaged 14.5 points and 10 rebounds during the sweep.
"We can't win if these guys don't play well," James said after the game, alluding to Hughes and Ilgauskas. "I need them to be a factor."
The undermanned Wizards had no chance with so many Cavs contributing and James' calculating vision in the stretch runs of some close games. They chose to make sure he didn't beat them with baskets - as he did in last April's 4-2 series victory - but with passes. Which is exactly what came to pass.
Monday saw Wizards coach Eddie Jordan pull out all stops, deploying seldom-used reserves like Andray Blatche, Calvin Booth and Donell Taylor. It worked for a bit, the Wizards reserves put up 35 points, 13 coming from Darius Songalia.
Antawn Jamison did it again, too, scoring 31 points, and Antonio Daniels dished out 12 assists. But all that kicking and fighting wasn't enough to overcome DeShawn Stevenson going 9-of-46 shooting in the series and Jarvis Hayes going 15-of-46.
They died hard.
"Those guys made us work for it. It was tough," Ilgauskas said. "The results may not show it, but this will help us down the road."
Horry clutch again
Robert Horry's clutch three-pointer broke open a one-point game and sparked San Antonio to an 96-89 win over Denver on Monday, giving the Spurs a 3-1 lead in their Western Conference series.
Horry's long, arching shot pushed the Spurs to a 93-89 lead with 30 seconds remaining and the Nuggets did not score again.
"That's what he does," Nuggets standout Allen Iverson told reporters. "He makes big shots for them."
Tim Duncan scored 22 points, 11 rebounds and six assists. Manu Ginobili added 18 points and Tony Parker had 15.
"We had a great run there where Robert really kind of took over the game for a little while, made some big stops, hit some big shots and kind of gave us a little distance," Duncan told reporters. "That was the big time."
Carmelo Anthony paced the Nuggets with 29 points. Iverson had 22 and Marcus Camby contributed 10 points, 17 rebounds and four blocked shots.
Denver began the fourth quarter with a six-point lead but San Antonio scored the next seven points, five of them from Ginobili.
Also, the Houston Rockets' Yao Ming sank two free throws with 11.7 seconds left to clinch a 96-92 home win over the Utah Jazz, giving the Rockets a 3-2 lead in their Western Conference series.
Yao finished with 21 points and 15 rebounds. Tracy McGrady led the Rockets with 26 and a career-high 16 assists.
The home team has won every game in this hard-fought series, which returns to Salt Lake City for Game Six on Thursday.