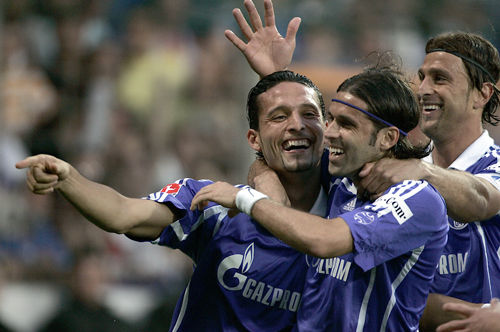 Six years after having the Bundesliga title snatched away from its grasp, sleeping giant Schalke 04 faces another anxious wait to see if the unfashionable side can end its 59-year drought to be German champion again.
While the likes of German glamour side Bayern Munich have often lorded it over their less fashionable rival from the heart of Germany's industrial west, working-class favorite Schalke 04 has yet to win the Bundesliga.
In 2005, it topped the table by three points with nine games to go, only to watch as Bayern passed it and won the league by a massive 14 points.
But nothing could rival the bitter experience of May 19, 2001, when on the last day of the season, its 5-3 win over Unterhaching seemed enough to seal its first crown with close rival Bayern Munich losing at Hamburg.
But an equalizer from Bayern's Patrik Andersson deep into injury time was enough to give Bayern the precious point that took the title to Munich and ruined Schalke's party in the cruelest fashion.
This year, Bayern is out of the title race, but Schalke must still see off the late challenges of Werder Bremen, which it leads by two points, and VfB Stuttgart, which it leads by one, with no room for error at the top with three games left in the season.
Long-suffering Schalke fans are anxious for a return to the 1930s glory days when their side was crowned champion five times - between 1935 to 1939 it did not lose a single league match.
So successful was Schalke that it was heralded by Nazi propaganda as an example of the "new Germany," despite the fact the team's two stars, Fritz Szepan, Germany's captain, and Ernst Kuzorra, were descended from Polish immigrants.
From an area heavily reliant on the local mines, the fans loved Schalke as their heros would often work alongside them in the pits before beating visiting sides later that same day.
But the mines, and the local area's main resource, have closed in the last ten years, leaving high unemployment in its wake.
And the last of Schalke's seven German titles, won when regional winners played off against each other, came in 1958 and since the Bundesliga's inception in 1963, they have often gone close, but never been crowned champion.
The club went through dark days in 1971 when it was discovered Schalke had thrown a game against Arminia Bielefeld and several players were fined.
Schalke spent most of the 1980s flirting with relegation and spent three separate seasons in the second division, but have been ever present in the Bundesliga since 1991, winning the UEFA Cup in 1997.
Striker Gerald Asamoah still has clear memories of the 2001 heartbreak.
"When I think of that game, it just brings up a lot of bad dreams," said Asamoah.
"I remember it well, I was drinking a bottle of beer and thinking of heading to the dressing room to celebrate with the boys. Then everything in the stadium went quiet as they saw Bayern had a free kick on the television screens in the Schalke stadium.
"I knew something was wrong and put the bottle down before I dropped it. Then the nightmare happened and the goal went in."
Even though Schalke is locked in a three-way battle and will again have to fight to the last ball, Asamoah believes they can do it.
"That would be the greatest thing in the world," said the 28-year-old. "I think our fans would party for a month and most of the squad would probably join them."
Schalke must beat Nuremberg, fighting for a UEFA Cup place, as well as relegation contenders Borussia Dortmund and Arminia Bielefeld, while hoping Stuttgart and Bremen fall off the pace.
Perhaps its biggest challenge will be the game on May 12 when it has to travel to neighbor and deadly rival Dortmund, which is loitering just above the relegation zone.
But there will be no neighborly love from Schalke's perspective and Asamoah just wants to see Schalke's Brazilian captain Marcelo Bordon finally lift the Bundesliga trophy.
"I have been waiting so long for this opportunity, we have won the cup and been runners up in the league. Now, finally, I also want to hold the trophy in my hands."