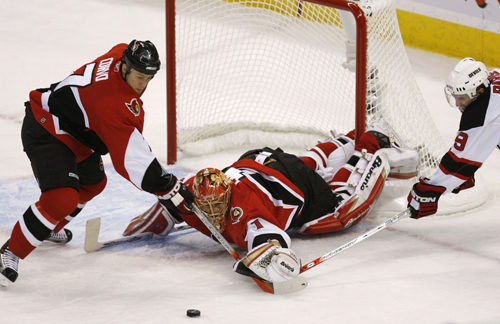 Martin Brodeur was on every puck all night, making each steady save and every acrobatic one. There had to be a reason he looked so awkward when the Senators finally scored.
The superstar goalie spun around after Ottawa's Mike Fisher made contact with him in the crease early in the third period, and it was enough to allow Tom Preissing's hard-angle shot from just off the right half-boards to snap a scoreless tie. The Devils' cries of "interference" went unanswered after a tight 2-0 loss despite another terrific performance by Brodeur, and they trail their Eastern Conference semifinal, 2-1, with Game 4 here Wednesday night.
"In my mind, that's interference on the goaltender, but these are judgment calls. I don't think it matters whether it's intentional or not, but they made contact with the goaltender," Devils GM and coach Lou Lamoriello said. "All I know is (Brodeur) was thrown off-balance. . . . We don't make excuses, but unfortunately there was contact there."
Little help from teammates
Brodeur, who rebounded from a shaky four-goal first period in Game 1 with 43 saves in a double-OT win in Game 2, appeared poised to get the outplayed Devils to overtime again. But Saturday's hero Jamie Langenbrunner and the rest of his teammates were denied the chance for more redemptive heroics by a slew of factors, in addition to the questionable noncall.
Ray Emery was steady in making 25 saves for his second career playoff shutout for the Senators, whose 34-25 shot advantage didn't do justice to how much of the early play they carried. Ottawa also had an apparent net-crashing goal by Jason Spezza - who tallied the late empty-netter - waved off with 4:30 remaining in the first period. Referee Kelly Sutherland immediately waved off the play, ruling Brodeur had covered the puck for a faceoff.
"Marty stood on his head all night, but we really didn't do anything with our chances," Scott Gomez said.
Indeed, the Devils also were 0-for-5 and totally disorganized on the power play, but Brodeur still had them locked in a scoreless tie until Preissing's goal 4:46 into the third. Mike Comrie initially fired the puck wide to Brodeur's left, and Fisher said he "was just trying to go to the net and create some traffic." Fisher denied intentionally making contact, but admitted he "got a piece" of Brodeur and "tripped him a little," before Preissing's shot whizzed past the goalie on the short side.
"It's disappointing, but that's playoff hockey," Brodeur said. "Intent shouldn't matter, but it kind of threw me off balance. . . . (Referee Brad Watson) told me he didn't see it, but then he told my players I had plenty of time to recover, so I don't know what to believe.
"I'm sure (Fisher) didn't do it on purpose, Mike's not that kind of player, but the fact is if one of our players is standing in front of the net and gets hit before that one-timer comes, it's an interference call. Goalies should be treated the same way. . . . But nothing we can do about it now."
Sharks rally
Looking dreadful early on, the San Jose Sharks revived themselves and rallied for a 2-1 victory over the Red Wings in Game 3 of the Western Conference semifinals to take a 2-1 lead in the series.
Jonathan Cheechoo's power-play goal at 13:19 of the third period gave them the lead. He gathered the rebound of Kyle McLaren's point shot, then pulled the puck to his backhand and maneuvered around goalie Dominik Hasek before jabbing it home.
"I saw him sliding over," Cheechoo said of Hasek. "He takes away a lot of the net. I just wanted to get it around him."
Strong goaltending from Evgeni Nabokov and Clowe's goal at 12:43 of the second period allowed the Sharks to head into the third with a 1-1 tie.
Considering how disjointed they had been for the first 30 minutes of the game, the Sharks had to take this as a blessing.
"You have to be patient," said Nabokov, who finished with 29 saves. "That's what we did."