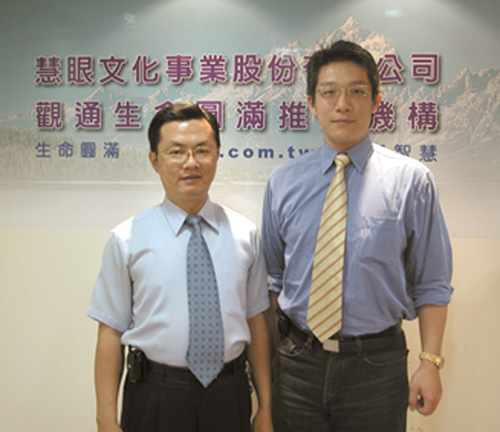 To alleviate the pressure of the media employees, Idea Cool PR & IMC Company came up with the idea - inviting the domestic well-known psychological consultants to getting together at Jing-Zhan restaurant, in Neihu to serve the reporters and cameramen on April 26.
Popular fortune predictions from the traditional astrology, hypnoanalysis, to the latest emerging "magic number prediction" are all available, and many of them, except few card readers, have complied with the trends of times by using the notebooks to facilitate their prediction.
The hottest inquiry question is, surely, man and woman relationships. Many asked if they could find their Mr(s). Right this year, though mostly, the predictors' answers were as ambiguous as possible, only one lady's face immediately turned pale when the predictor told her that she had met "the one" just right at her working place (-clearly not her type).
After having a bustling and interesting afternoon, most of the reporters and cameramen felt much released. Though the psychological consultations might not draw a clear path for you, but they helped to find people's deepest concern.
"Serving as a social megaphone, reporters have bore much burden and always felt stressed," said executive director of Idea Cool Wu Yi-ching who used to work in the media field. "We hope people in modern society working in pressure could know the importance of releasing themselves with an appropriate way."
Pictured are Yang Bo-ru(left), organizer of Guan-Tong Psychology License Courses, and Wu Yi-Ching (right), executive director of Idea Cool PR & IMC Company.