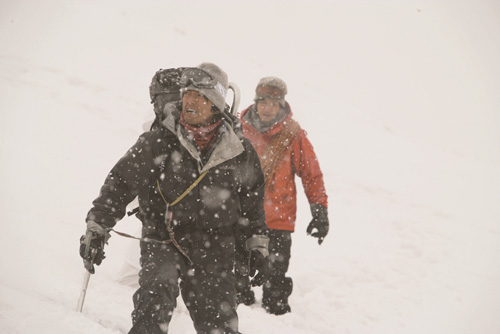 Tokyo - Shochiku, Japan's leading entertainment conglomerate, announced that it will distribute the suspenseful action film "Midnight Eagle" (working title) and has earmarked a November 23, 2007 release for the blockbuster film which is produced by Midnight Eagle Partners led by co-producer Universal Pictures Japan.
Popular Japanese actor, Takao Osawa ("Helen the Baby Fox" "Crying Out Love, in the Center of the World") will star in the film with Izuru Narushima (from box office success "Fly, Daddy, Fly", also notable writer) signed on to direct. Costarring with Osawa are Yuko Takeuchi ("Ring", "Heaven's Bookstore"), and Hiroshi Tamaki ("Waterboys").
Japan's Defense Agency and the Ground/Air Self-Defense Force has given its full support for the film, which is budgeted at US$10million. Production began in January 2007 in the deep snow mountains in the Northern Alps of Japan.
"Midnight Eagle" is based on the original novel of the same title, written by Tetsuo Takashima. Taking place in the treacherous, snow clad Northern Alps of Japan, the story concerns an intense stand-off between Japan and an unknown foreign country which has never established diplomatic relations with Japan, after a US stealth fighter crashes in the secluded mountainside of the Northern Alps. Amidst a blizzard in a winter mountain, a battle begins that will decide the fate of 127 million people.
In the skies above the severe winter conditions of the Northern Alps, a top secret American forces' stealth bomber known as the "Midnight Eagle" suddenly vanishes. Its payload is a "specialized warhead." If it were to explode, the entire nation of Japan would be hurled into an unprecedented calamity.
Osawa plays the role of an ex-war photographer who now only takes nature photos in the mountains. After personally witnessing the crash of the stealth plane, he is dragged into defending his country.
Yuko Takeuchi is the news reporter who is also an ex-sister-in-law of Osawa. Despite her bitter feelings towards the protagonist, she senses the danger and backs him up to prevent the lethal weapon from falling into the wrong hands. Hiroshi Tamaki is the passionate young journalist working for a huge newspaper company who tries to get behind the scenes with Osawa.
The film set was built in Tsunan Town (Nigata Prefecture) and was centered around a full-size stealth bomber, at a height of 740-meters above sea level. The location points were on a 2,612-meter mountain (Hokendake), and a 2,220-meter mountain (Yatsugatake).