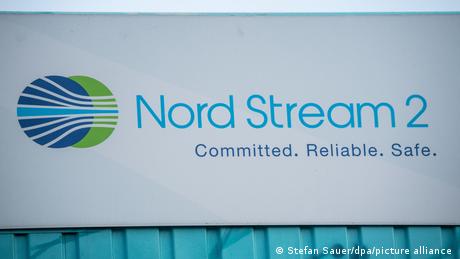 US Senate Democrats on Thursday voted down a bill that would have put sanctions on businesses involved in the Nord Stream 2 pipeline between Russia and Germany.

The bill was sponsored by Republican Senator Ted Cruz.

"Only immediately imposing sanctions can change Putin's calculation, stop a Ukrainian invasion, and lift the existential threat by Nord Stream 2," Cruz said, referring to Russian President Vladimir Putin. "If we don't come together today, Ukraine risks getting wiped off the map altogether."

The vote on the bill was 55-44, whereas the bill needed 60 votes to pass. The Senate is currently split 50-50 between Democrats and Republicans.

A handful of Democrats joined Republicans in voting for the measure.

Why did Democrats oppose the bill?

President Joe Biden's administration and its supporters argue that the bill would have harmed relations with Germany.

"Supporting his bill would be a vote to compromise transatlantic unity," Democratic Senator Jeanne Shaheen said.

The Democrats introduced an alternative bill on Wednesday, which would impose sweeping sanctions on top Russian officials and banking institutions if Russia moves troops into eastern Ukraine. The bill would also allocate another $500 million (€435.8 million) in military aid to Ukraine in the event of an invasion.

Russia has ammassed tens of thousands of troops on the Ukrainian border, a move which has alarmed the US.

US Secretary of State Antony Blinken has said that Germany will almost certainly block the pipeline if Russia invades Ukraine. Germany's new government has not given any definitive assurance of this publicly.

What is the Nord Stream 2 pipeline?

The Nord Stream 2 pipeline is currently awaiting final approval from German and European officials before it goes into operation.

The Nord Stream 2 pipeline would double the volume of gas pumped into Germany by Russian firm Gazprom. Both Republican and Democratic lawmakers have voiced their concern that this increases Putin's leverage over Europe.

Ukraine and Poland also oppose Nord Stream 2. The pipeline would allow Russia to bypass transit fees through those countries.