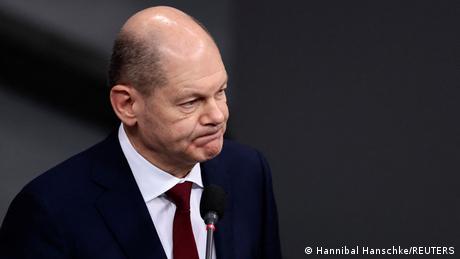 After several days of talks aimed at de-escalating tensions between Russia and Ukraine, German Chancellor Olaf Scholz said the situation remains "very serious" and had not become less dangerous.

"What we are seeing here is one more reason to keep doing what we are doing," Scholz said.

This week, Russia had meetings with the United States, NATO and the Organization for Security and Co-operation in Europe (OSCE) with the goal of dissuading Moscow from further military action against Ukraine.

Russia has stationed artillery and more than 100,000 troops near its border to Ukraine. Russia delivered a list of security demands to the US, many of which the United States and NATO have deemed unacceptable, such as banning Ukraine from ever joining the NATO military alliance. Moscow has maintained that it has no intention of invading Ukraine.

What has Scholz said?

Scholz said that it needed to be made clear to Russia that "military activity would have a very high price."

Undeterred by the lack of apparent progress after the days of talks this week, the German chancellor called for continued dialogue with Moscow.

Scholz said Thursday he hopes to revive the Normandy format talks, with Berlin and Paris engaging in talks with Moscow and Kyiv, something French President Emmanuel Macron has also sought to restart.

"We are very happy that soon the negotiators from all four sides will also meet again to start preparatory talks for this," Scholz said.

The last meeting under the Normandy Format was in 2019 in Paris. Moscow has not, however, expressed interest in renewed Normandy format discussions involving national leaders.

What has Germany's foreign minister said?

German Foreign Minister Annalena Baerbock said the West should maintain a tough, united line when it comes to Russian aggression in Ukraine and elsewhere on NATO's eastern flank.

Speaking in Brest, on France's western coast, at a meeting of EU ministers, Baerbock said, "If we Europeans are united and whole, then we can play our role in the different formats very, very strongly, a role that relies on toughness, but also on dialogue."

On Tuesday, Baerbock will be in Moscow to meet with Russian Foreign Minister Sergey Lavrov in her first official visit to the Russian capital. There she will have an opportunity to try out the efficacy of any desired hard line European leaders wish to take.

Russian Foreign Ministry spokesperson Maria Zakharova said the focus of next Tuesday's talks will be bilateral relations as well as topics of concern to Moscow such as NATO's eastward expansion. Russia seeks guarantees that Ukraine will not join the military alliance and wants to see expansion over the last 25 years scaled back.

What has Germany's defense minister said?

Meanwhile, German Defense Minister Christine Lambrecht has reiterated the country's long-standing line that the controversial North Stream 2 gas pipeline from Russia to Germany is a purely commercial endeavor. She said the pipeline should not be used as a bargaining chip in negotiations with Russia over the situation in Ukraine.

Lambrecht told Inforadio the pipeline "should not be dragged into this conflict."

The loudest groans over North Stream 2 have come from Washington. The Biden administration this week worked to stifle a vote in the Senate attempting to place sanctions on the pipeline that is now complete but lacking technical certification from German authorities before it can begin to operate.

Baerbock had said that the gas pipeline will not be allowed to operate if there was any new escalation in the Ukraine crisis.