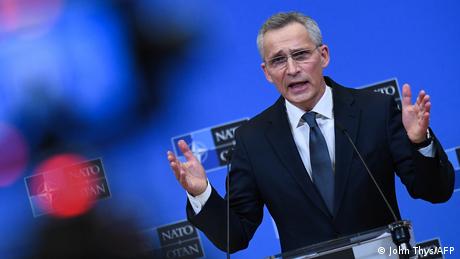 DW spoke with NATO Secretary-General Jens Stoltenberg on Thursday, a day after the NATO-Russia Council (NRC) convened for the first time since 2019.

Stoltenberg spoke with Brussels correspondent Teri Schultz after the Western military alliance and Moscow revealed they remained at an impasse over tensions on the border between Russia and Ukraine.

Deutsche Welle: Russian Presiden Vladimir Putin's spokesman, Dmitry Peskov, said that talks with NATO were unsuccessful. Would that be your assessment of how the NATO-Russia Council meeting went?

Jens Stoltenberg: I think it was an important meeting just because of the fact that certain NATO allies were able to sit down with Russia after two years of no meetings. The discussions were very difficult...but the fact that we had difficulties just proves the importance of the meeting. We are faced with a very critical time for European security.

We are ready to engage in dialogue with Russia, but we will never compromise on core principles for European security.

Ukraine has been on the agenda of every NATO-Russia Council since 2014. If Russia were not willing to de-escalate, would you also be willing to enter discussions on other subjects?

This is very much intertwined. As soon as we discuss European security, and as soon as we discuss risk reduction and transparency, of course, Ukraine will be part of those discussions. But I think the best way now is not to conduct diplomacy in the media, in the public. It is to express a willingness, as we did in the meeting yesterday, to address a wide range of issues.

If they are ready to sit down, let's sit down. And then start negotiations in those meetings, not in the media.

Do you think all the allies, specifically the United States, were satisfied with the talks? Are they asking for a repositioning of forces in Europe that not everyone is comfortable with?

The United States, which had representatives here in Brussels at the same time, has made it very clear that these meetings were not negotiations. In the NATO-Russia Council, we floated ideas. We were looking for...a process that can ensure a politcal way forward.

Doesn't it feel like we are all waiting for President Putin to decide if he wants to go ahead with talks?

Russia has a choice to either engage in dialogue with NATO and Western allies or chose confrontation. We need to be clear-eyed about the prospect that Russia will — once again — use military force against Ukraine.

We will provide support to Ukraine to enable them to strengthen their ability to defend themselves.

Russian Deputy Foreign Minister Alexander Grushko said in his press conference after the meeting that Russia has no troops in Donbas. Is that your assessment as well?

Russia controls the the separatists in Donbas and through them they have a presence in the eastern part of Ukraine. There's no doubt about that.

Is a Russian invasion of Ukraine less likely today than it was yesterday?

I think it's too early to to to to assess the outcome of this meeting, because we have not seen a response from Russia yet. But I think the most important thing is that we need to continue the dual track approach.

We are ready for dialogue. We demonstrated that yesterday. But we're also prepared if Russia once again starts to use military force against a neighbor.