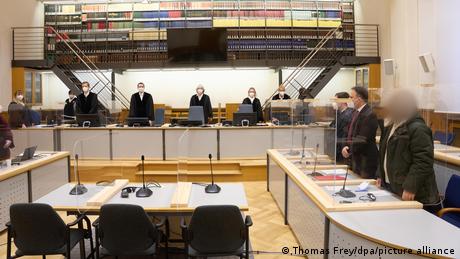 A court in Germany found a Syrian former colonel guilty on charges of state torture on Thursday and sentenced him to life in prison.

Anwar Raslan was found guilty of overseeing the murder of 27 people at the Al-Khatib detention center in Damascus.

The trial in the higher regional court in Koblenz in the state of Rhineland-Palatinate is a world first, connecting crimes against humanity with state-backed torture in Syira.

What was Raslan accused of?

The 58-year-old former colonel had denied committing torture or giving instructions for others to commit torture.

The crimes against humanity were alleged to have taken place in 2011 and 2012 — during the early stages of the Syrian Civil War.

Raslan was allegedly responsible for the torture of at least 4,000 people in a General Intelligence Service prison in the capital, Damascus.

The defendant was accused of supervising interrogations including "electric shocks," beatings with "fists, wires and whips," rape and sexual abuse, and sleep deprivation.

Prosecutors said Raslan had assigned the interrogators and prison guards to duty in the notorious prison and determined their work procedures. He had also known about the extent of the torture. The mistreatment had served to coerce confessions and obtain information, the prosecution said.

Raslan's lawyers last week called on the court to acquit their client, claiming that he never personally tortured anybody, and had defected in late 2012.

The trial could set a precedent for future proceedings against Syrian officials who committed crimes during the civil war.

"Despite all the shortcomings of international criminal justice, Anwar Raslan's conviction shows what the principle of universal jurisdiction can achieve and that such trials are in fact feasible in Germany and Europe," said Wolfgang Kaleck, general secretary of the independent rights group the European Center for Constitutional and Human Rights.

Roth said HRW had helped provide some of the evidence in the trial, maintaining that "the torture and murder in custody... was a key part of the modus operandi of the Assad government."

Whitney-Martina Nosakhare of the International Justice Program at Human Rights Watch (HRW), told DW that Thursday's conviction was "a watershed moment for survivors of torture."

"This is a moment that means so much for torture survivors because it's one of the few tools that is left to see some justice happen."

Nosakhare noted that "courageous and determined victims have been the cornerstone of making this trial happen."

She added that next week there will be another trial taking place in Frankfurt over a Syrian doctor accused of torturing people at a hospital in Damascus.

The prosecution had demanded life imprisonment, asking the court to rule out any release within the first 15 years because of the severity of the crimes.

The trial got underway in April 2020, with two defendants in the dock.

The younger of the two, a Syrian man identified as Eyad A., was sentenced to four and a half years in prison in February last year for aiding and abetting a crime against humanity.

He was found guilty of helping to bring 30 anti-government demonstrators to the al-Khatib torture prison.

Both men — who are considered as belonging to Bashar Assad's regime — were arrested in Germany in 2019 after fleeing Syria.

At the UN Security Council, Russia and China have vetoed attempts by Western powers to refer the Syrian crisis to the International Criminal Court. The result is that survivors of torture and chemical weapons attacks have been left with limited options to seek justice.