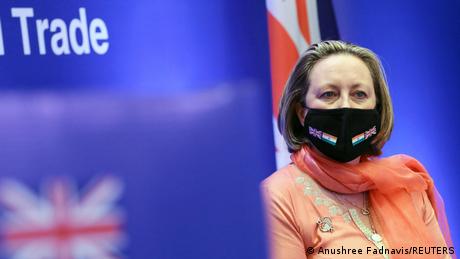 The UK and India kicked off talks in New Delhi on Thursday to lock in a new free trade agreement.

It's the most ambitious round of trade talks that Britain has launched since Brexit. The UK is looking to bolster its trade volumes, which have taken a major hit since leaving the European Union.

What did officials say?

Indian and British ministers praised the start of bilateral trade talks on Thursday, painting the negotiations as a prime opportunity for both sides.

"A deal with India is a golden opportunity to put UK businesses at the front of the queue as the Indian economy continues to grow rapidly,'' British International Trade Secretary Anne-Marie Trevelyan told reporters in New Delhi.

"This is the first of my important agreements this year as Britain set out on her independent journey post-Brexit," she added.

Indian Minister of Commerce and Industry Piyush Goyal said that they first hope to agree on a series of smaller deals in the next few months that can quickly take effect.

"Both sides have agreed that we will focus initially on areas which are of mutual benefit and where there is less disagreement, and for which we have set a very aggressive timeline of next few months," Goyal said.

"We are seizing the opportunities offered in growing economies of the Indo-Pacific to cement our place on the global stage and deliver jobs and growth at home," Johnson said in a statement.

Officials are set to get to work next week on the negotiations. The two sides hope to finalize an agreement within a year.

What does each side want?

Both the UK and India stand to majorly benefit from the agreement — provided that they are willing to budge on sticking points such as tariffs and visas.

The UK said the agreement could potentially double British exports to India and increase two-way trade by $38 billion (€33.1 billion) per year.

The two sides are eyeing cooperation in the food and drink industries, tourism and renewable energy technology to combat climate change.

Britain especially wants India to cut tariffs on Scotch whisky and British cars — a potential stumbling block, as India is known for its reluctance to lower trade barriers.

India has made it clear that it wants to secure a better deal for British visas, making it cheaper and easier for Indian citizens to acquire one.

That could produce pushback at home in the UK among anti-immigration supporters of Brexit.

What other trade deals has the UK made?

Since its official exit from the EU in January 2020, Britain has focused on building stronger trade ties in the Indo-Pacific region.

India has been seen as a more favorable partner amid uncertainties over ties with China.