TAIPEI (Taiwan News) — Police on Thursday (Jan. 13) arrested a man, surnamed Chang (張), who fired a pepper gun into the air during a road rage incident on the previous day, causing the victim to become frightened, CNA reported.

Taichung Police Department’s Fengyuan Precinct on Wednesday night received a report from a driver who said that he had had a dispute with another driver on a street in the city’s Shengang District, the report said. The other driver got out of his car and began to curse him irrationally, while explosive noises could be heard at the scene, the victim said, adding that as he had had a sudden feeling of fear, he hurried home and called the police.

Police formed an ad hoc committee to investigate the case, which included reviewing surveillance footage at the intersection of the scene and interviewing neighboring businesses, per CNA. The investigation pointed to Chang as a suspect, and police tracked him down and seized a pepper gun.

According to the police investigation, Chang and the victim had a driving dispute. As Chang got angry during the argument, he fired his pepper gun into the air, making some explosive sounds.

As Chang’s behavior had made the victim frightened, police referred him to Taichung District Prosecutors Office on suspicion of making threats to cause injury to the life and body of another, per CNA. 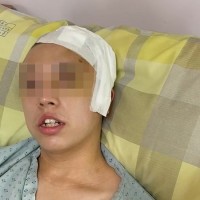