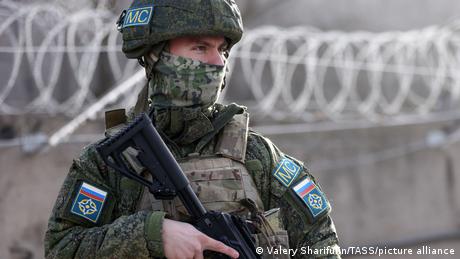 Russia-led soldiers began withdrawing from Kazakhstan after being called in amid unprecedented unrest, Russia's Defense Ministry said on Thursday.

It was the first peacekeeping deployment for the Collective Security Treaty Organization (CSTO), a regional military alliance led by Russia and comprised of six ex-Soviet states.

Around 2,000 soldiers were sent in after protests over fuel price hikes in the Central Asian country grew into larger anti-government protests that saw deadly clashes and thousands arrested.

What did Russia say?

In a statement published by Russian news agencies, the Defense Ministry said that troops that had been guarding key facilities in Kazakhstan began transferring over protection of the sites to local law enforcement.

The troops also started preparations to leave Kazakhstan and return to their home countries.

The "collective peacekeeping forces [...] are starting to prepare equipment and materiel for loading into the planes of the military transport aviation of the Russian aerospace forces and returning to the points of permanent deployment," the statement added.

The pullback is expected to be completed within 10 days.

Why were the troops in Kazakhstan?

Protests against rising fuel prices broke out in Kazakhstan on January 2, before quickly spreading across the country.

The demonstrations evolved into wider discontent against President Tokayev's government.

The demonstrations turned violent last week. In Almaty, the former capital and largest city in Kazakhstan, protesters set fire to government buildings and briefly took control of the airport.

The president also claimed the protests were sparked by foreign-backed "terrorists" but did not provide any evidence.

The Health Ministry briefly reported that over 160 people had been killed in the unrest, although the report was later deleted without a reason being provided. Dozens of people were also injured.

Around 12,000 people have been arrested in the aftermath of the demonstrations.