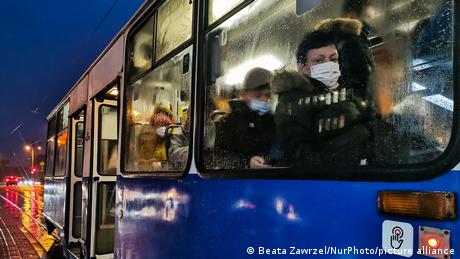 On Tuesday, Health Minister Adam Niedzielski told viewers of TVN24 that Poland's pandemic death toll was now more than 100,000 people. But Krzysztof J. Filipiak, the deputy rector of the private Medical University of Warsaw, told the website onet.pl that the number of deaths is far higher.

Filipiak said more than 200,000 people had died during the pandemic in Poland. "Half of those are confirmed cases of COVID-19," he said. "The other half are either unconfirmed cases or collateral — deaths that can be traced back to the paralysis of the health service, the failure to treat other illnesses, the deterioration of health care and the collapse of the health system."

Filipiak said Poland had the worst-funded health care system in the European Union and the fewest doctors per 1,000 inhabitants, at 2.4 — by comparison, the number is 4.2 in Germany. Many public health observers also blame the high COVID-19 death rate on the low vaccination rate in Poland. According to the government, fewer than 21.3 million Poles — about 55% of the population — are fully vaccinated. About 7.7 million people, or 18%, have received booster jabs. In Germany, 72% of people have received two doses and 43.5% have been triple-jabbed.

Among the 27 EU member states, only Croatia, Slovakia, Romania and Bulgaria are behind Poland when it comes to vaccination. Many citizens are still refusing to get jabbed despite repeated appeals from the authorities and a host of celebrities. After record-breaking days with more than 650,000 vaccinations in June and an ensuing steep drop in the summer, rates began to rise again in autumn. Yet the number of vaccinations per day rarely exceeds 250,000.

There is little pressure to get vaccinated in Poland. Though holiday markets were canceled across Europe in December, in Poland people flocked to marketplaces and crowded around mulled wine stands. The New Year's Eve party staged by the state-run TVP broadcasters brought 16,000 people out to celebrate.

The government regularly publishes "information and recommendations" about limiting contact, but this guidance is rarely followed. Restaurants, bars and cinemas are only allowed to fill 30% of seats, but vaccinated people are exempt from limits, according to the government website, and eateries, hotels and fitness clubs do not require documentation. A simple "yes" suffices when customers are asked if they have been jabbed. That partly has to do with the fact that the legality of asking about vaccination status remains in question.

The bigger the city, the more likely people are to heed pandemic measures. But, in Baltic Sea resorts or in the mountains of southern Poland, you see packed bars where no one seems to be interested in vaccination, vaccine passports or face masks. You are often subject to ridicule if you enter a store in eastern regions of the country wearing a mask. Many people openly question the existence of the pandemic.

Deputy Health Minister Waldemar Kraska recently said Poles had developed a genetic resistance to regulations over the centuries. In November, he told the private radio broadcaster RMF that that was why the government had not introduced a shutdown. "If we don't enforce the existing restrictions," he said, "it won't help if we introduce additional ones."

As the infection numbers rapidly rise, legislators for the nationalist Law and Justice party (PiS) may be forced to take concrete measures to slow the spread. Draft legislation introduced in November and currently being debated would give employers the right to check the vaccine status of staff. Lawmakers from across the right-wing spectrum — including from within the PiS, a party in which anti-vaccine sentiment is rife — have expressed their opposition to the bill.

More than 60 associations, most of them opposed to vaccination, were invited to a January 5 meeting of the legislature's health committee meeting. Critical media referred to the gathering sarcastically as a "festival" of opponents of pandemic measures.

At the end of December, President Andrzej Duda told the Polish Press Agency that people had to "understand that those who did not wish to be vaccinated had their fears and doubts." When asked whether he would sign the vaccine bill into law should it pass parliament, Duda said: "That will be a very difficult decision."