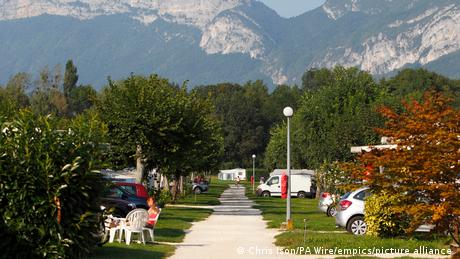 French police have arrested a man over the 2012 murder of a British-Iraqi family and a cyclist in the remote Alpine region, prosecutors said on Wednesday.

The arrest marks the first real progress in the killing of three members of the Al-Hilli family, one of France's most notorious unsolved cases.

"A person has been arrested as part of an investigation into the murder of the family and of Sylvain Mollier," Annecy prosecutor Line Bonnet said.

The arrest will allow investigators to carry out searches and verify the person's schedule and movements around the time of the killing, the prosecutor added.

What do we know about the case?

Saad al-Hilli, a Baghdad-bornBritish engineer, his wife, and her mother were killed in their car near the village of Chevaline while they were on vacation.

Mollier, a local cyclist was also killed after apparently stumbling upon the scene.

Each of the three family members was shot several times in a woodland car park close to the village in the hills above Lake Annecy.

The family's two daughters — who were also in the car — survived the attack.

The older one was shot in the shoulder and suffered serious skull fractures after being badly beaten.

The family lived in rural Surrey, south of London.

The suspect was a man who had already been questioned by the police as a witness in the case, according to French news channel BFM TV.

His lawyer called the arrest unjustified as the man had been "cleared in 2015" after being spoken to as a "mere witness."

"This man's position is still the same: 'I was on a walk'... He did not cross paths with this poor family," the lawyer told reporters Wednesday evening.

Over the past decade, several individuals were detained as part of the investigation, but none were charged in the case.

Saad al-Hilli's brother Zaid was arrested in Britain in June 2013 on suspicion of conspiracy to commit murder but released a day later and eventually told there was not enough evidence to charge him.

Police suspected a feud as the brothers fell out over the family house inherited from their mother, who died in 2003.

Another line of inquiry was al-Hilli's work as a satellite engineer, with prosecutors saying the murders could be related to "industrial espionage and technology transfers" in the satellite industry.

In February 2014, an ex-policeman and arms collector, who lived in the area, was detained but was soon eliminated from the inquiry.