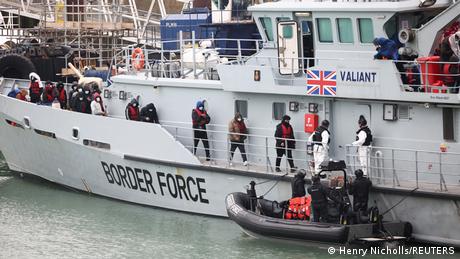 The case concerns a 25-year-old Syrian man who came to the UK in May 2020. He reportedly evaded forced conscription into the army in 2017 to avoid being forced to kill fellow Syrians.

The man, who has not been named for his protection, has said returning to Syria would put his life in danger. He would be targeted as a draft dodger, arrested and possibly killed, he said.

In its rejection letter to the man, reported by The Guardian newspaper, the Home Office said he could safely return to Syria. "I am not satisfied to a reasonable degree of likelihood that you have a well-founded fear of persecution," the Home Office wrote, according to The Guardian.

In what appears to be a U-turn, the Home Office tweeted on Tuesday that "under the current circumstances we are not returning people to Syria. The UK government agrees with the UN judgement that Syria remains unsafe for them."

The Home Office confirmed its statement to DW.

In 2021, the UK introduced a major overhaul of its immigration and asylum system. Addressing Parliament In December, Home Secretary Priti Patel said the new law represented a "comprehensive, fair but firm long-term plan, which addresses the challenge of illegal migration head-on."

"Asylum-seekers deemed to have arrived in the UK illegally will no longer have the same entitlements as those who arrive in the country via legal routes," Patel said. "Even if their claim is successful, they will be granted temporary refugee status and face the prospect of being indefinitely liable for removal."

"Asylum seekers will be able to be removed from the UK while their asylum claim or appeal is pending, which opens the door to offshore asylum processing," she said.

Though information on the applicant's case in question remains scant, the government's stance is a disturbing and surprising development, said Rim Turkmani, the research director for Syria with the Conflict Research Programme at the London School of Economics.

Turkmani, who has given expert evidence to the UK's Foreign Affairs Select Committee on the Syria crisis, said that, although the level of violence had abated in parts of Syria, the safety of individuals was still at risk, particularly where political motives are involved.

"Evading conscription in Syria after 2011 is indeed a political statement by men who refuse to join an army that is attacking civilians, committing war crimes, and where they may be positioned in posts where they have to take part in attacking civilian areas themselves. Seeking to avoid conscription puts the person at risk of detention, which, as documented by many human rights organizations, could mean torture and even death. The mere fact that this person has applied for asylum puts him at risk if he is sent back to Syria," she told DW via email.

A number of UK refugee charities contacted by DW said they were unable to comment on this particular case at this point.

In a statement to DW, Mariam Kemple Hardy, the head of campaigns at Refugee Action, said: "It beggars belief that the Home Office is declaring Syria to be a safe country. Frankly, if this government is no longer granting sanctuary to Syrian refugees, who will it grant sanctuary to? This decision pulls up the drawbridge to those fleeing war and persecution. It fails to meet even the bare minimum anyone would expect of a government claiming to uphold its obligations on the world stage."

A Home Office spokesperson had earlier told DW in a statement that it does not comment on individual cases, but added that "all asylum applications are considered on their individual merits on a case-by-case basis and in line with current published policy."

Should UK authorities decide to return Syrians to areas they deem safe, it could have far-reaching implications.

"Firstly, the Syrian authorities and its allies will use this to pretend that Syria is safe for the return of all refugees. Refugee-hosting countries such as Turkey, Jordan and Lebanon will use this to argue that it is safe for refugees to return even when it is not. Other countries will feel more comfortable in adopting the British and Danish line. Most European countries need little excuse in this anti-immigration climate to make it harder to claim asylum," Turkmani said.

In 2020, Denmark declared the Syrian capital, Damascus, safe. Since then, authorities have revoked or did not renew the Danish residency permits of hundreds of Syrians from that region. Sweden has adopted a similar policy.

Though UK authorities have appeared to back down in this particular instance, it highlights the hard line that Patel is pursuing on immigration and asylum in an effort to counter criticism that she's not been doing enough specifically to stop refugee boats arriving from France.

"This case could make her look tough in the eyes of those critics showing she is prepared to crack down on asylum applications as well as immigration. The mood in Britain sadly remains very anti-immigration as we saw in the Brexit referendum, and too many people do not understand the difference between asylum-seekers and other immigrants," Turkmani said.