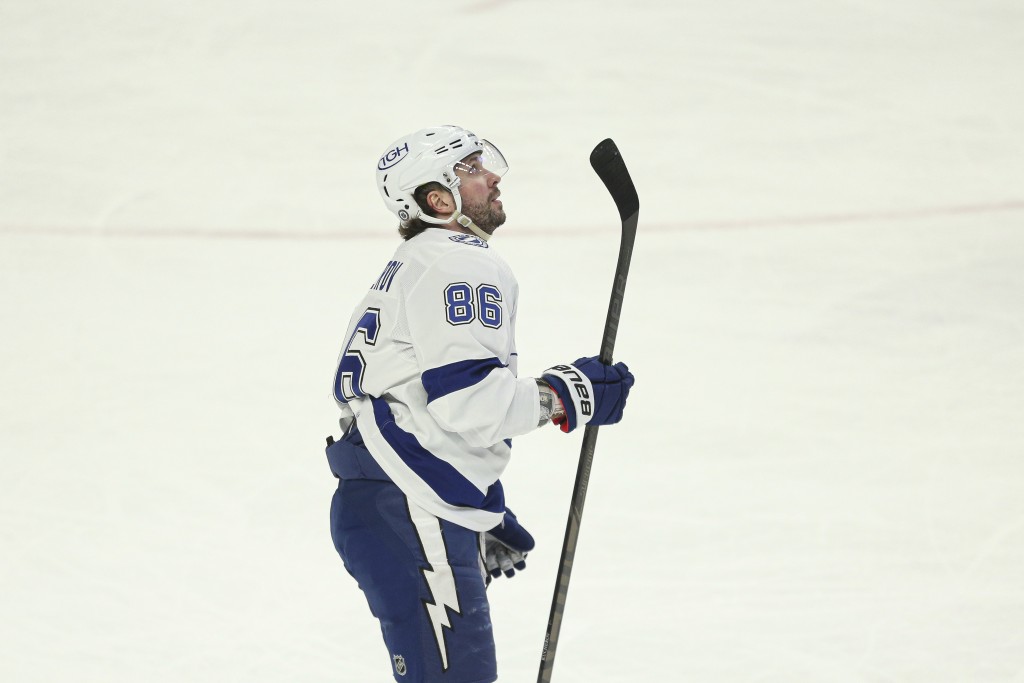 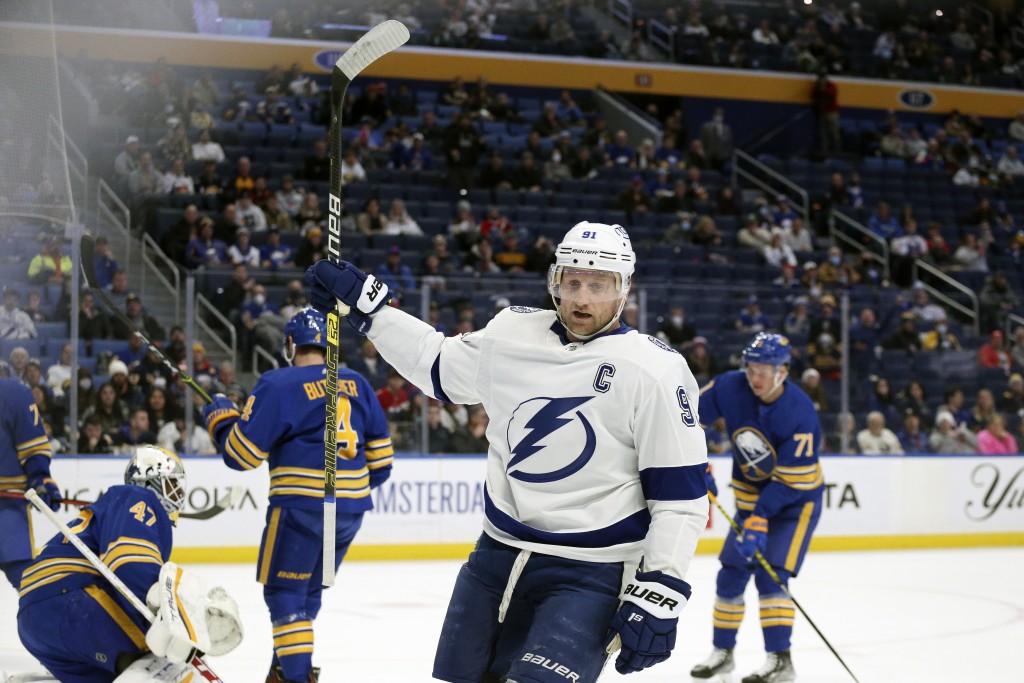 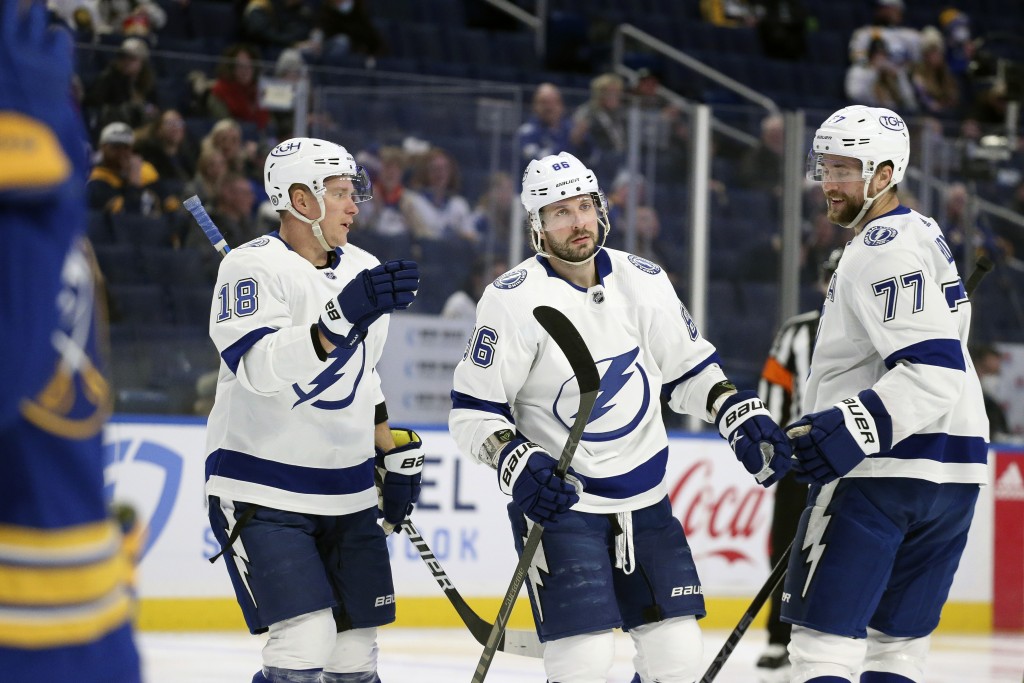 Anthony Cirelli had a goal and an assist, Ondrej Palat extended his scoring streak to four games, and the Lightning got three assists from Alex Killorn and two from Victor Hedman. Andrei Vasilevskiy made 17 saves for his 20th win of the season.

Tampa Bay (24-9-5) has won three of four following a three-game skid to keep pace with the Florida Panthers atop the NHL standings with 53 points.

Vinnie Hinostroza scored for the Sabres, who have lost seven in a row at home and dropped to 3-13-4 over their past 20 games. Buffalo goalie Ukko-Pekka Luukkonen left the game with a lower-body injury after he gave up two goals on nine shots in the first period. Malcolm Subban made 23 saves on 27 shots.

NASHVILLE, Tenn. (AP) — Matt Duchene scored two goals, including the game-winner on a power play 3:01 into overtime, and Nashville won its fifth straight.

Luke Kunin also scored twice, Tanner Jeannot added a goal and Juuse Saros made 40 saves for the Western Conference-leading Predators. Roman Josi had three assists in a matchup between the top two teams in the Central Division.

Cale Makar had a goal and two assists for Colorado, which had won five in a row. Nicolas Aube-Kubel, Andre Burakovsky and Nathan MacKinnon also scored for the Avalanche, and Darcy Kuemper made 27 saves.

In overtime, J.T. Compher blocked Josi’s shot attempt, but the rebound caromed to Duchene in the slot, where he fired the puck past Kuemper.

Malkin had not played since undergoing right knee surgery in June. The four-time All-Star and 2012 Hart Trophy winner had been skating with teammates for several weeks and was a full participant in Monday’s practice.

It was Malkin’s 63rd multigoal game during the regular season and first since March 10, 2020. The 35-year-old Russian center had a career-low eight goals and 28 points in 33 games last season.

Malkin centered the second line between Carter and Kasperi Kapanen, which was responsible for all four Pittsburgh goals. Kapanen added two assists and Tristan Jarry stopped 25 shots for the Penguins, who bounced right back from Saturday’s 3-2 loss at Dallas that snapped a 10-game winning streak.

Jakob Silfverberg scored for the Ducks, and Anthony Stolarz made 30 saves.

Connor Murphy also scored for Chicago, and Marc-Andre Fleury made 24 saves for his 11th win.

Boone Jenner scored for Columbus, and Gus Nyquist had a short-handed goal and an assist. Joonas Korpisalo stopped 16 shots in his third loss in four games.

Columbus has dropped four of five and lost at home to the Blackhawks for the seventh consecutive time.

Boudreau was 8-0-1 since taking over the Canucks on Dec. 6. Vancouver was 8-15-2 when he replaced Travis Green.

Aleksander Barkov scored his team-leading 15th goal and also had an assist for Florida. Aaron Ekblad had a goal and two assists, Maxim Mamin also scored, and Frank Vatrano and Anton Lundell each had two assists. Sergei Bobrovsky stopped 42 shots.

The Panthers move to 6-0-1 in their past seven games.

LAS VEGAS (AP) — William Nylander scored in regulation and got the winner in a shootout as Toronto beat Vegas.

Auston Matthews and Ilya Mikheyev also scored in regulation for the Maple Leafs, who improved to 5-0-1 on a six-game point streak. They are 21-4-2 since opening the season 2-4-1. Jack Campbell made 31 saves.

Keegan Kolesar, William Karlsson and Alex Pietrangelo scored for the Golden Knights. Robin Lehner stopped 15 shots for Vegas, which has lost four of five — all at home.

The octopus — a longstanding fan tradition in Detroit — hit the ice less than a minute into overtime with play in San Jose’s end. Couture directed the linesman to grab it, and play continued, with the Sharks pushing the puck to the other end.

Brent Burns sent the puck toward the net and Alex Nedeljkovic stopped it but couldn’t control it. As the puck sat near the goal line, Couture knocked it in for the winner in his first game back after missing three due to a positive test for COVID-19.

Burns assisted on all three Sharks goals for the second straight game. He also did it in a 3-2 overtime win in Philadelphia on Saturday.

Tyler Bertuzzi and Nick Leddy scored for the Red Wings. Detroit has lost five of six since returning from a 12-day break, with the only win coming last week at home against the Sharks. Nedeljkovic made 37 saves.