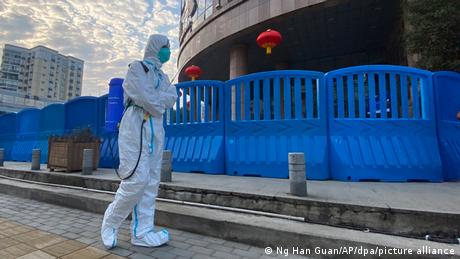 Tuesday marks two years since the first known death in the COVID-19 pandemic was reported in the central Chinese city of Wuhan. It was here that the virus was first detected and began spreading among the population on a large scale.

Despite the huge cost that the world has paid over the past two years, the international community is still seeking answers about the initial outbreak that took place in China.

US President Joe Biden ordered the American intelligence community to conduct investigations into the origin of the virus , while the World Health Organization (WHO) has repeatedly urged Beijing to share data about the initial outbreak in Wuhan.

No clarity on virus origin

Last January, the WHO sent a team of scientists to China to carry out an investigation, a process that was closely scrutinized by the Chinese government.

The team concluded that it was extremely unlikely that the virus leaked from a lab. The team also claimed that the virus may have jumped from animals to humans.

The results were met with skepticism and experts urged the WHO to launch further investigations after failing to provide clear evidence about the origin of the virus. Even though the WHO tried to revive the investigation, China has rejected the global health body's plan, emphasizing that Beijing can't accept another origin-tracing probe.

Zeng Yixin, the vice minister of the National Health Commission, said in July 2021 that China had always supported "scientific virus tracing," but that Beijing was opposed to politicizing the tracing work.

Two years since China reported the first COVID death, public health experts have different views on whether it is still possible to trace the origin of the virus.

"If this is a naturally occurring epidemic and if China had no system to track and detect it in 2020, it will be impossible to trace what happened in Wuhan two years ago," said Mei-Shang Ho, a research fellow at the Institute of biomedical sciences at Academia Sinica in Taiwan.

"Another scenario would be that the virus was leaked from a lab, and the only possible way for us to know more about the origin of the virus would be if someone is willing to share the information with the outside world," she added, pointing out that "Chinese authorities may try to cover it up and the researchers may not have the power to disclose the information."

Some experts think the highly politicized nature of the investigation has made it difficult for scientists to gain insights into the origin of COVID.

"From the beginning, it was pretty much politicized, and that largely disabled any investigation into the source of the virus," said Xi Chen, an associate professor of health policy and economics at the Yale School of Public Health.

"I don't know how this can be solved and how the international community can rebuild the trust to restart or initiate this effort to trace the source of the virus, as well as how to avoid this from happening in the future," he told DW.

Chunhuei Chi, director of the Center for Global Health at Oregon State University in the US, says that the most serious mistake committed by China is not its refusal to share information about the origin of the virus, but its attempt to suppress information about its spread among the population in Wuhan in the initial stage.

"We have evidence suggesting that the virus had started spreading in Wuhan in November 2019, so why did the Chinese government cover it up in the first place?" he said. "It caused both the Chinese people and the whole world to suffer. Their initial decision to hide these facts is the typical way that authoritarian governments have been reacting to the crisis."

Two years after the outbreak began in Wuhan, China has once again imposed strict measures on several cities to curb the spread of coronavirus variants within its border. About 13 million people in the Chinese city of Xi'an went into lockdown last month, and some have posted information about alleged human rights violations on Chinese social media.

Officials have faced complaints from the city residents over chaotic handling of the lockdown, including poor access to food and daily essentials.

On Tuesday, at least 5 million residents in the Chinese city Anyang in Henan Province were also ordered to stay home by local authorities as the province became the latest hotspot for China's domestic outbreak.

Some have argued that these strict measures reminded them of the strategies that the Chinese authorities used in Wuhan two years ago.

Experts also have different explanations as to why China is still upholding the "zero COVID" strategy two years after the virus first emerged.

Beijing has long touted its strict response to COVID as preferable to the at times lax and chaotic measures overseas.

The country's official tally since the start of the pandemic — just over 100,000 COVID cases — is a fraction of the record one million cases logged by the US in a single day earlier this month. The official death toll has stayed under 5,000.

The country effectively cut itself off from the world in March 2020, and virtually banned foreigners from entering. Since then, travel restrictions have eased slightly.

But international tourism is non-existent and the government has said it will not renew expiring Chinese passports unless the holder has a good reason for travel.

Mei-Shang Ho believes that one major reason for Beijing's zero COVID strategy is the upcoming Winter Olympics in Beijing, as Chinese authorities want to make sure that the event won't be derailed by the virus outbreaks.

"They want to continue to hold the Winter Olympics regardless of the price they may have to pay," she told DW.

Reopening not on the agenda

"There is a huge variation in terms of how authorities in different cities might handle the pandemic," he told DW.

"If China reopens too soon, some parts of the country will not be able to manage it as well as the other parts. It's something that looks alarming to them so they are trying to maintain the zero COVID policy. They don't know exactly what could happen," he added.

Furthermore, the emerging variants have convinced Beijing to believe that the pandemic will last much longer, Chen said. "That's why they have strengthened their strategies in dealing with COVID because this is something they have learned from other countries' experiences."

With the highly transmissible omicron variant now spreading in several parts of China, Chen thinks it will be more than one year before China puts reopening on its agenda.

"The issue of reopening is almost like a taboo in China as journalists don't ask relevant questions and no one is making predictions about what might happen if China decides to reopen," he said. "It might happen in China one year from now, but it's definitely not on the agenda for 2022."