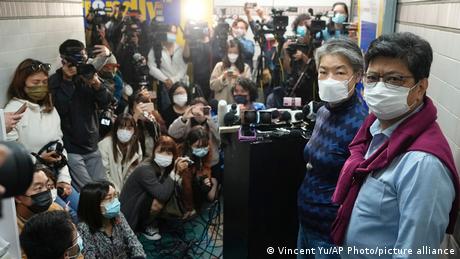 Hong Kong's Citizen News had just celebrated its fifth anniversary in the first few days of 2022, but the independent news outlet abruptly announced its decision to close down on the evening of January 2.

The next day, the front page of the website was filled with sentimental reflections from their journalists. Rather than writing other people's stories as usual, they were expressing their complicated feelings and reflecting on what could be the end of their career.

Journalist Wong, who did not want to reveal his first name, reflected on that dramatic day, as all his colleagues were busy putting out their last reports on the final day of Citizen News.

"I finished a report that I'd been procrastinating on for half a month in one day, while everyone in the newsroom was frantically writing their reports," the 27-year-old told DW.

"The server that we used for editing videos almost crashed. That was the laughing stock of the newsroom on that day, but at least we didn't get into trouble and had a chance to bid farewell to our readers and colleagues," wWoing said.

The management at Citizens News cited the raid and arrest of former staff members at Stand News, another independent media outlet in Hong Kong known for its investigative reports, as the main reason behind the decision to close the publication.

"The decision was made within a short period of time. The trigger point was the fate of Stand News," Chris Yeung, chief writer at the Citizen News, said at a press conference on Monday. "We could not rule out that ... we might be exposed to some risks."

'No more space for independent media in Hong Kong'

The Stand News was forced to close down last week after 200 police officers from the National Security Department raided its office and froze its assets. Seven people were arrested on suspicion of conspiring to publish "seditious" materials.

Two news editors were later formally charged under the crime and put into detention.

Ronson Chan, the chairman of the Hong Kong Journalists Association and former deputy assignment editor at Stand News, told DW that it was a very sad day for him, as he lost his colleagues, his job and his identity as a journalist.

"The closure of Stand News and Citizen News is a warning sign to the public that there is no more space for independent media in Hong Kong," he said

Hong Kong Chief Executive Carrie Lam defended the government's move, claiming the closure of the two media outlets had nothing to do with the national security law (NSL) imposed by the Chinese government last year.

"I could not, on behalf of these organizations and their responsible people, explain what they mean by a chilling effect," she said during the weekly press conference on Tuesday. "But I certainly will reject any allegations that this is related to the implementation of the national security law."

The impact of the sedition law

The concerns about the clampdown on press freedom aren't only felt by journalists who work for independent media outlets.

A journalist surnamed Kiu, who also does not want to reveal his first name for fear of reprisals, works for a pro-establishment media outlet. He told DW that the government's definition of sedition as "wider than the Red Sea."

"In the past, news about China would be heavily censored, but, after the NSL came into effect, Hong Kong's security forces have a lot of power to prevent negative news, especially those about them, from being published," he said. "I think investigative journalism will become increasingly rare in Hong Kong, as Chinese-language media in Hong Kong becomes more cautious under the current climate."

Kiu said he had yet to find a way to deal with the sense of powerlessness and frustration that come with the ongoing clampdown on media outlets. "It's hard to see many capable colleagues lose their jobs, and there's hardly any media outlet that can still accommodate them," he said.

Observers say the intensified crackdown on independent media outlets shows that the high level of press freedom that Hong Kong used to enjoy no longer exists.

"The remaining media in Hong Kong are either the mouthpieces of the Communist Party or media that are already very close to the government. The era when there were still many types of media outlets no longer exists in Hong Kong. No media outlet in Hong Kong can do investigative reporting now," he added.

Sharon Yam, an associate professor of writing and digital studies at the University of Kentucky, said any remaining independent media outlets in the Chinese special administrative region would have to carry the burden of holding authorities accountable while making difficult risk calculations to protect the safety of their journalists and staff.

What's next for journalists in Hong Kong?

Since Stand News and Citizen News closed down, at least six small and midsize online media have also ceased operations amid what many describe as the industrywide chilling effect.

Traditional media outlets such as Ming Pao also added a statement under their opinion articles, emphasizing that any critical opinions are intended to "correct policy mistakes" rather than "inciting hatred, resentment or hostility towards the government."

"If it weren't for the safety of their employees, media outlets in Hong Kong wouldn't have to shut down," Ronson Chan said. "I believe many people see the facts and I still hope the authorities understand that a pluralistic and independent voice is vital to Hong Kong."

HKPORI's Kim-Wah Chung told DW that many journalists won't be able to keep doing their jobs based on the standards that media in Hong Kong used to follow.

"Many of the remaining Hong Kong media are now fully aligned with the government, so journalists who have left Apple Daily or Stand News most likely won't want to work for these media outlets," he said.

"Some of them might consider becoming independent or citizen journalists, but they will still face a lot of challenges, including the lack of resources to support their operations or the growing risks facing media workers in general," he added.

Even though he feels that his future in Hong Kong appears bleak, Wong hasn't given up on the idea of working as a journalist.

Wong said most of his colleagues would try to remain anonymous and continue to document lives in Hong Kong in a discreet way. "Even if you can't write about the most sensitive subjects, if you can dig up a little more information for your readers on a story, you're already making a contribution," Wong noted.

He said all journalists in Hong Kong kne0w the risks very well, but he believes that those who choose to stay in the field now treat journalism as a religious belief.

"Whether or not we stay in this industry, journalism won't die if we keep telling the truth," he said.