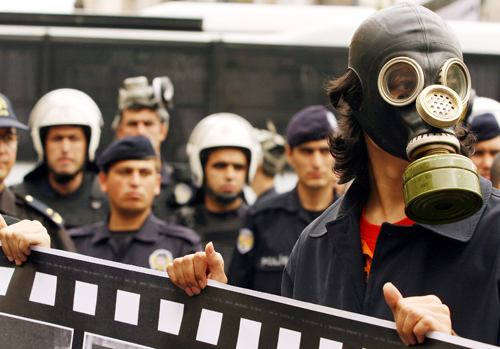 The Turkish stock market dropped sharply yesterday in financial fallout from a political crisis, a day after huge crowds of pro-secular demonstrators protested against a government they believe is steering Turkey toward Islamic rule.
Turkey's Prime Minister Recep Tayyip Erdogan prepared to address the nation yesterday night amid calls for early general elections and fears that the armed forces will intervene in a dispute pitting Turkey's religiously oriented ruling party against the military-backed, secular establishment.
The turmoil unsettled traders in Istanbul, where the benchmark index, the IMKB-100, was down 6.3 percent at 43,940.04 points by afternoon, after opening down 7.99 percent. Turkey's currency, the lira, slid against foreign currencies and was trading at 1.36 against the U.S. dollar, compared to Friday's close of 1.33.
Turkey, a candidate for European Union membership, has been steadily recovering from a financial crisis in 2001, curbing inflation and pushing ahead with banking reform and other initiatives backed by the International Monetary Fund. The country has huge foreign debt but is attractive to foreign investors.
Analysts said the markets will likely recover if the government defuses tension by agreeing to early elections for Parliament, a move that could appease critics and clear the way for more vigorous implementation of economic reforms once a new government is in place. But they warned that sustained political uncertainty would take its toll.
Turkish Foreign Minister Abdullah Gul, a close ally of Erdogan, is running for president with the backing of the Islamic-rooted government. But his candidacy has triggered an outcry from secular groups that think he would use the office - a post with veto power over legislation - to chip away at the separation of state and religion.
The head of Europe's top human rights organization expressed shock and concern at the stance taken by Turkey's military, which threatened in a statement late Friday to intervene in the presidential election in Parliament and urged the government to curb Islamic influences. The military has ousted several governments in past decades.
"This statement looks like a deliberate attempt by the armed forces to influence the election of a new president," said Terry Davis, secretary general of the Council of Europe. "They should stay in their barracks and keep out of politics."
"I am shocked that the military in a member state of the Council of Europe should behave in this way in the midst of a democratic and constitutional process," Davis said in a statement released from his office in Strasbourg, France.
At least 700,000 pro-secular demonstrators marched in Istanbul on Sunday. Waving the country's red flag and singing nationalist songs, demonstrators in Istanbul demanded the resignation of the government and called Erdogan a traitor.
"We don't want a covered woman in Ataturk's presidential palace," protester Ayse Bari, a 67-year-old housewife, said in reference to Gul's wife Hayrunisaah, who wears the Muslim headscarf. "We want civilized, modern people there."
Both Gul and Erdogan have pledged loyalty to Turkey's secular constitution, and cite their record as modernizers in implementing EU reforms.
Gul was expected to win the vote because in Turkey the president is picked by Parliament, which is dominated by his party. But Turkey's Constitutional Court was evaluating an appeal by the pro-secular Republican People's Party to cancel the voting process. The court was expected to announce its decision on today or tomorrow morning.
The opposition had appealed to the court to annul the process, arguing that there was no quorum during the first round of voting on Friday. Gul failed to win that round, and another round is scheduled for tomorrow.