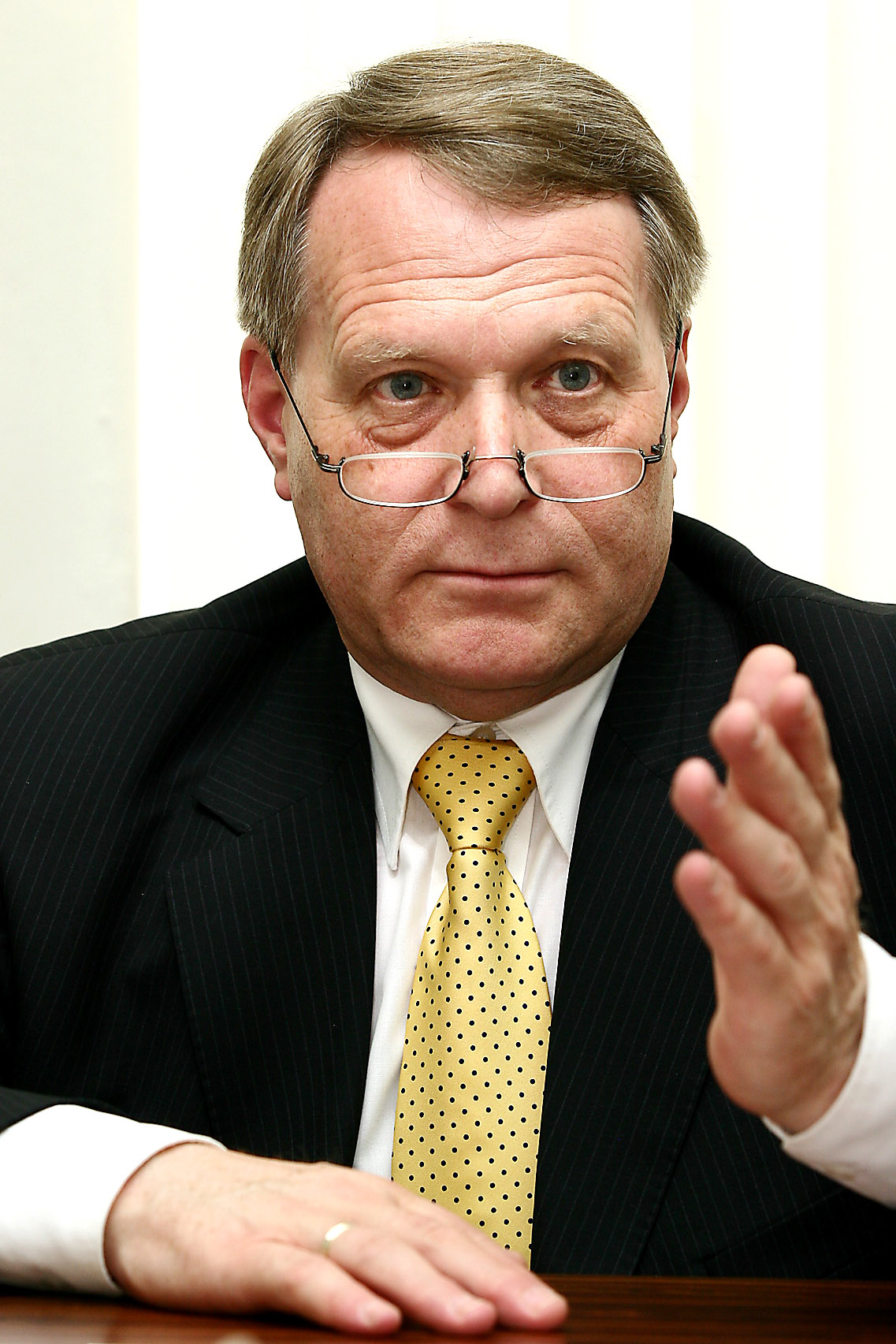 A European parliamentarian urged Taiwan yesterday to bolster its defense capabilities while acknowledging that the EU would not intervene militarily should China attempt to take Taiwan by force because it would be outside Europe's regional security responsibility.
Dr. Georg Jarzembowski, the head of the Taiwan Friendship Group of the European Parliament, said Taiwan needed to act in procuring weapons to defend itself to be taken seriously on security issues in the rest of the world.
"If the people of Taiwan feel threatened by 900 missiles across the Straits, people from the outside would say what are the Taiwanese doing to defend themselves," Jarzembowski said. "Then you would wonder how long it takes until the (Taiwan's) parliament takes a decision on these questions."
Regardless of Taiwan's actions, however, Europe would only offer political support if a conflict were to break out, because the security of the Far East region, especially Taiwan, was the responsibility of the United States and Japan, Jarzembowski contended.
"Our (Europe's) forces are already overstretched with the war in Afghanistan. Based on principle of regional responsibility, the question of Taiwan's security should be addressed to the U.S. and Japan," he said. He stressed, however, that he saw no danger in the region because China will most likely "behave carefully with sensitivity" before the 2008 Beijing Olympic Games.
Jarzembowski, who is making his 10th visit to Taiwan, has been an outspoken advocate on behalf of Taiwan in the European Parliament on several issues, including its national security in the face of China's growing military threat and the island's repeated efforts to enter the World Health Organization.
Speaking to a small group of reporters, he reiterated his support for Taiwan's WHO bid. While admittance to the WHO was not likely in the near future, Taiwan should continue to "raise the flag" on the issue to highlight its sovereignty and its right to be admitted into the health body.
"The EP has supported Taiwan's WHO bid for several years and will continue to do so because the people of Taiwan should be protected and because by being part of the group, Taiwan can easily share ideas how to protect people against serious diseases on a global scene," he said.
On Taiwan's recent move to apply for WHO full membership status under the designation "Taiwan," Jarzembowski said the new strategy might be the right step to take for "political reasons," but stressed the goal should still be on obtaining observership and meaningful participation in the organization.
Taiwan must ask itself what is the wisest way to achieve the aim, he said. At the moment, the U.S., Japan, and the EU do not support Taiwan's bid for full membership bid in the WHO and the European Parliament only supports the observership bid. However, the decision ultimately lies with the sovereign government of Taiwan, he added.
Jarzembowski also called for peaceful dialogue between China and Taiwan as one of the ways to dissolve current cross-strait tension.
The dialogue, he stressed, must be held on equal footing between one sovereign state to another, and rejected any role for the European Parliament as a mediator.
Jarzembowski also said he understood Taiwan's position in rejecting having the Olympic torch pass through Taiwan in light of the proposed route announced last Thursday in Beijing.
Taipei was not classified as one of the 20 "international" cities taking part in the relay, but rather as a Chinese "city outside China's border" along with Hong Kong and Macau.
Jarzembowski felt that whatever the proposed route might be, Taiwan could not let it send a wrong message to the international community.
All efforts should be made to avoid any misunderstandings or false images for those without knowledge of the Taiwan-China situation to suddenly think that Taiwan belongs to communist China, he said.
"I can understand the reluctance of the president (Chen Shui-bian) because you cannot put Taiwan on the same footing as Hong Kong or Macau," the European parliamentarian suggested. "Clearly Hong Kong and Macau are special administrative regions that belong to China, but Taiwan is a sovereign country and thus should not be put in the same realm of Hong Kong and Macau."
Jarzembowski, along with three other European parliamentarians will speak at a roundtable today on Taiwan-European Union relations. Earlier yesterday, the delegation met with President Chen Shui-bian in the Presidential Office where Chen sought the European Parliament's backing for Taiwan's WHO bid.